Nostalgia often plays tricks on gamers’ minds, causing them to fondly remember whatever their particular ‘good old days’ were with wistful smiles, often forgetting how much design has evolved to improve experience since then. The farther removed we are, the fuzzier the images get, the less vivid. THQ Nordic’s De Blob 2 takes those now black-and-white-photo memories of Wii-era 3D platformers and splashes a bucket of paint over them, restoring all the brilliant colors to their full, messy glory. It’s a touch-up job that looks better than ever (thanks to a fresh coat of HD), reviving old impressions so sharply that despite the misbehaving camera and sometimes sloppy controls, the sheer joy of the genre shines just enough through.

The campaign kicks off with Comrade Black, a pudgy wanna-be fascist so narrow-minded in vision that he probably sees being a cyclops as preferential to the alternative, busy stealing color from a group of bustling tropical islands and their main burg, Prisma City. Naturally, it’s up to de Blob and his cat-burglar robot friend with the body of a raccoon tail, Pinky (who is playable in co-op), to save the day by pulling a Pleasantville and bringing some brightness back to all the black-and-white-and-gray dinge. If you’re interested in story, well, there really isn’t much of an overarching one. However, De Blob 2 is full of bizarre social commentary on everything from religious fanaticism to brainless technology, often sprinkled with an individualist streak that pokes fun at commies. The messages conveyed feel so weird in this bubbly universe that they are almost entertaining in their oddness, but even if you don’t care about stuff like that, there are plenty of FMV cutscenes that feature some pretty skillful attempts at goofy slapstick (or is that splatstick?), so there’s something for everyone! 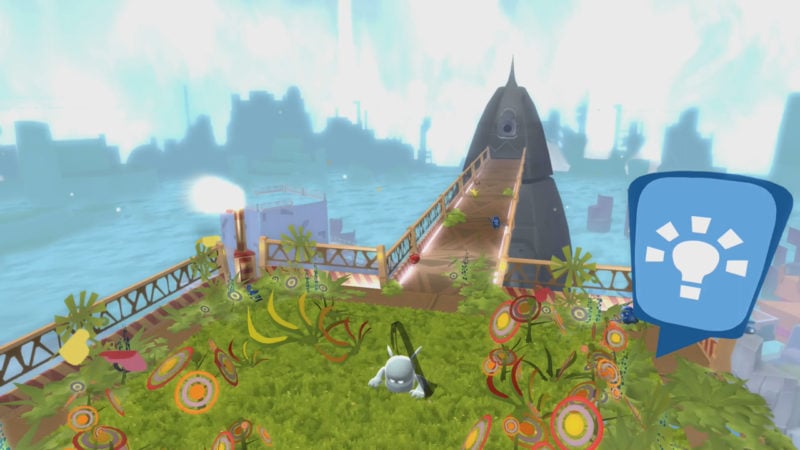 These little shorts are rewards for completing each of the twelve levels in De Blob 2, and provide some welcome breaks from what is otherwise some fairly repetitive — albeit somewhat satisfying — platforming gameplay. Players control the titular blob as he rolls about town, soaking up gooey paint and spreading it on thick over buildings, billboards, road signs, and whatever other exposed surfaces are within reach simply by touching them. There really isn’t too much to this part of the gameplay, but much like with Paper Mario: Color Splash, there is something so addictive about filling in a blank canvas. It’s hard not to want to cover it all, and much time can be spent searching over every inch of each area in order to find that one palm tree not painted.

Unfortunately, in a strange choice that doesn’t seem to add any value to the experience whatsoever, players will be on the clock while fulfilling the obligations of the main quest. Each level starts with a timer, and while more minutes can be added by freeing citizens from the clutches of the evil INKT organization, the benefit of being pushed along by an arbitrary limitation seems more Comrade Black than free-wheeling Blob. It will definitely annoy some people, and if time runs out (or they die by INKT tentacles), they’ll find themselves re-playing some decent chunks of blob antics. Regardless, watching these worlds spring to life is truly pleasurable, and after completing those main quests, players are free to roam about these stages as they please, where they’ll find plenty of additional painting challenges, as well as a multitude of obligatory collectibles, before they move on to the next phase.

De Blob 2 is a platformer, even if it is a rather simplistic one, and so the developers have included a variety of moves that they then build some decent challenges around. Blob can roll, jump, target something to stomp, and smash blocks and enemies with a raging dash. The latter two abilities require paint, so various methods of acquiring tints are scattered about. Some of the game’s best puzzles and challenges revolve around mixing prime colors to produce different shades, and there are some clever power-ups, such as becoming a rock-hard bowling ball, to boot as well. ‘Inspiration’ can be collected to spend on several upgrades that include Blob’s ink capacity or number of lives, and of course art students will be graded at the end of each level.

The majority of the platforming involves squishing enemies or bounding off of special launch pads to reach new areas, which all works fairly well, despite sluggish controls that feel a little soft around the middle. It’s likely that more than a few miscalculations will be made when leaping off skyscrapers or boats, but the game is fairly forgiving about punishing those mistakes. Where De Blob 2 isn’t so merciful is in its camera. Fighting against cameras is nothing new to 3D platformer fans, but that doesn’t make cheap deaths by falling off a ledge into the abyss any less infuriating. Luckily, there are also quite a few buildings that must be entered that function as mini stages, and inside these structures, De Blob 2 briefly turns into a side-scroller, which eliminates stupid camera controls, and adds some nice variety — even if these stages basically retain the same gameplay concepts. 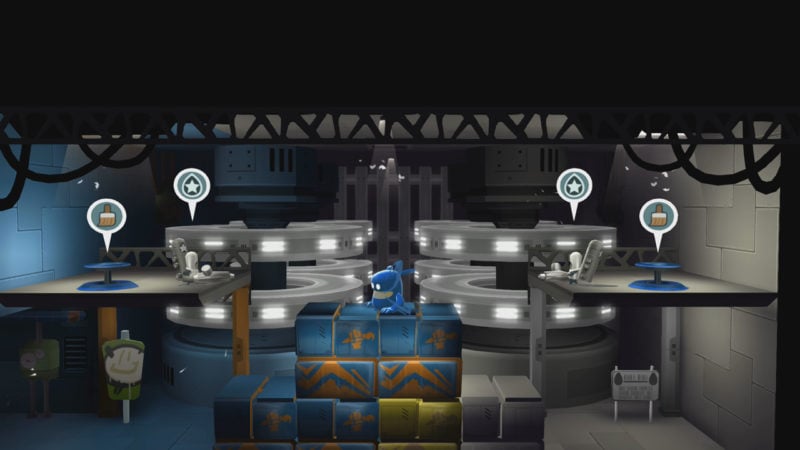 Rinse and repeat; De Blob 2 never really shakes the formula up too much over the course of the roughly 15-hour adventure, and there are definitely times when the sameness of it all can detract from the entertainment. Visuals are nice for a game that released two generations ago, but most stages are indistinguishable from each other, both in layouts and assets. The jazzy music is extremely joyous and hummable, and having it flesh out as more turf is colored in really sells the idea that life is coming back to the community, but even these catchy tunes start to blend in after a while. There is creativity, but not too much creativity; De Blob 2 is no Renaissance masterpiece.

Still, for those who fondly remember running, jumping, and the excitement of hoping they land in precisely the right spot despite being slightly disoriented, De Blob 2 will be like sitting down with an old pal they haven’t seen in ages. You may have taken different paths since the days of Wii, but the walk down memory lane is still vivid — it just needs a bit of coloring in.