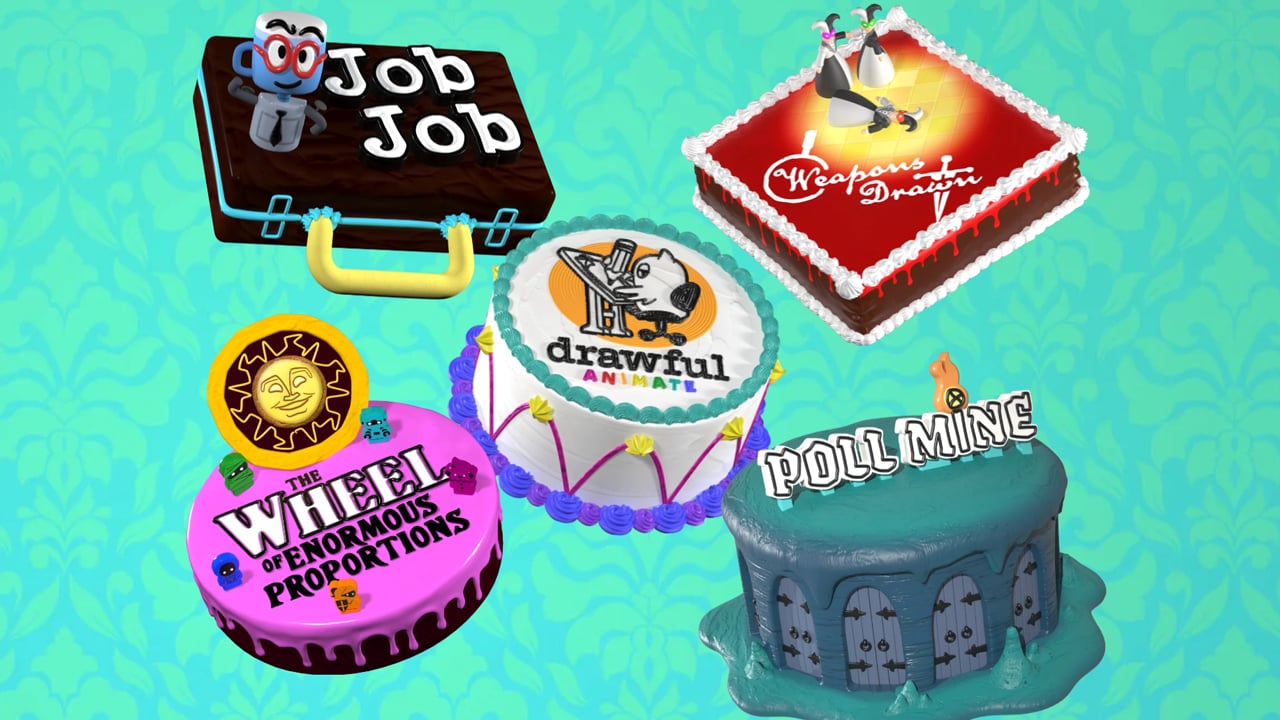 The second you hear “Jackbox” everyone will be pulling out their phones, grabbing chargers, and already somehow laughing away. It may be the eighth consecutive Party Pack to be released, but the latest entry in the Jackbox series brings more back-to-back bangers to squabble and go hysterical over. With some reimaginings, new concepts, and one spoiled occasion to skip, The Jackbox Party Pack 8 is another animated celebration well worth paying the entry fee for.

Between its textual and visual tricks, publisher and developer Jackbox Games has admirably continued to do what they do best: bring folks together for a surprisingly energetic time. As to be expected from the series, The Jackbox Party Pack 8 contains five games: Drawful Animate, Job Job, The Poll Mine, The Wheel of Enormous Proportions, and finally, Weapons Drawn. Through its heart and soul, where The Jackbox Party Pack 8 strives most is providing five unique experiences that drastically differ from one another — almost every game included is an exceptional knockout, but even those that are not are guaranteed to provide some fun.

To kickstart the latest party, Jackbox Games ensured first impressions would stick well with all players. Drawful Animate completely revitalizes the original Jackbox classic thanks to its newly added two-frame setup — it is miles from being a “Drawful 3”. On the surface, it may be the third version of one of the company’s most popular games, but there is more to this iteration than meets the eye. Being able to animate a second frame adds a tremendous amount of possibility to Drawful and opens the door for more descriptive art. Rather than relying on single words or short phrases, players can now easily fool one another with longer detailed explanations.

It may add more to its runtime, but the ability to now create an animated piece opens the door to a wider range of possibilities. On a side note, the corgi centipede who tracks time at the bottom of the screen is just adorable. Party Pack 8 is littered with animations and details that give some of the game’s smallest aspects a larger lick of personality. You would think Drawful: Animate would contain the strongest characteristics of the bunch, but even its humorous quirks do not hold a candle to some of its companions — which says a lot considering that this is the game where players are creating quirky two-frame stop motions.

The game after Drawful: Animate is what will likely become the audience favorite of the newest lot: Job Job. This triple-round interview icebreaker takes the best of Jackbox’s critically acclaimed Quiplash game and brings it to an original office scenario. Rather than having to just pit answers against each other, players will have to come up with explanations to their questions and then proceed to thread three together by utilizing their opponents’ words. Mangling coherent sentences into your own cheeky or honest phrases is just as fun as coming up with one. Job Job may take a ton of notes from Quiplash, but its additional layer of challenge makes it far more engaging to tackle.

Next, there is the team effort-styled game known as The Poll Mine. As two teams explore a Lord of the Rings-inspired dungeon, players must work together to determine a ranking they all had a hand in crafting together — if you have ever done one of those paper sheets of “what is the most important item I should bring to a deserted island” you know exactly what you are getting into. The determination to get players to work together is rather admirable, and a first for the series. Jackbox has never been one to provide group effort-type games where players aren’t sticking knives at each other’s throats for glory. With all things considered, even if The Poll Mine does not always make the most of its unique situation for a Party Pack game, it still provides more than an ample amount of fun.

With two fantastic starting gifts and one fascinating experiment, The Jackbox Party Pack 8 then hits players with the game’s one major penultimate party pooper: The Wheel of Enormous Proportions. This trivia game is unquestionably the worst party of the pack even as it showcases some of Jackbox Games’ most organic side. The Jackbox Party Pack 8 provides some great group-gathering time-wasters to write home about, but this is not one of them. Unless they are being meticulously threaded together to still involve a particular level of strategy, multiplayer games that rely on luck are just not usually substantial — and that is a sentiment that trends through the genre of party games.

The Wheel of Enormous Proportions has a lot of charm in its characters and dialogue, however, its annoying focus on spinning a wheel for points is simply broken and unfair. There are matches where a player can win by practically contributing nothing. That’s not to say the game is completely rigged and worth skipping though. The questions being asked and the goal of the game is amusing. In terms of answering trivia, The Wheel of Enormous Proportions is a game that requires a rewarding amount of prior knowledge to conquer. It’s just a shame that the overall structure is shattered by hope and shady fortune. No matter what place you land on the leaderboard, the satisfaction of this title is the only one to not hit hard.

Finally — and to end off this package on a notably high note, there is the new murder party game titled Weapons Drawn. Quite literally as the name states, Weapons Drawn will have players designing their own armory by hand as they enter a fancy old-fashion gala party looking for blood. Weapons Drawn is The Jackbox Party Pack 8’s definitive game that flaunts the utmost amount of depth. It requires a serious amount of thought and pressure that culminates into a mix of being sneaky, sassy, and lustful.

Inspired by the likes of Arsène Lupin and other thieves of the 18th and 19th centuries, players have to stealthily implement a given script letter of their name into a calling card; that same drawing though is also where players will depict their weapon. It is a classic case of “whodunit” as players aim to get the highest number of kills, evasions, and cases closed. Every player will constantly be turning on their allies’ backs to come out victorious. Between making calling cards with weapons and creating names for your companions, there are so many classic deception techniques involved in Weapons Drawn. It may present a unique learning curve, but solving crimes and culminating kills feel incredibly fulfilling once the player knows how to become a master detective assassin.

The Jackbox Party Pack 8 definitely bleeds a bit from some of its oversights, yet it is still another fantastic addition to the series lineup. Even when the worst of the lot is at its lowest points, there is still a serious amount of entertainment to gain from each individual game. If you enjoy the other Jackbox Party Packs, there is no doubt that the eighth coming entry will be exactly for you. Some of its games will unquestionably become series staples while others will collect dust — but that is Jackbox for you, a series that provides tailored experiences to a variety of audiences. For those looking for another Jackbox Party Pack to purchase, 8 will rank high on the list for the numbered titles you should be picking up.