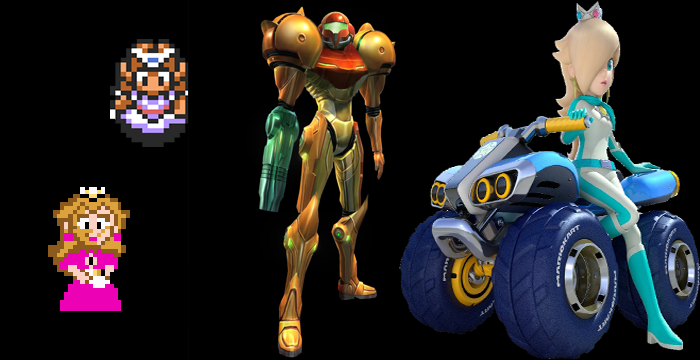 Another Super Mario Bros. game usually brings about yet another bare-bones plot involving the rescue of a certain pink perpetual kidnapping victim; it’s a video game story as old as a woman surnamed Toadstool, but while this simplistic damsel-in-distress trope may cause some to rue the characterization of women in video games, it is merely one type of representation of the female gender out of the many in the Nintendo’s vast library. Perhaps more than any other developer, Nintendo has depicted the variety of characters that women can be; not always positive and not always perfect (who is?), but with a growing sense of confidence and complexity that has made their games better for it, and more importantly made these characters what characters are ultimately supposed to be: interesting. It certainly didn’t start out that way, with Pauline trapped in a cage after being put there by a giant monkey. Her victimhood is her biggest trait, which isn’t exactly compelling, while a similarly bland Mario at least gets to be the hero, but let’s face it- Donkey Kong comes off the best in this game named for him. Things didn’t get much better when Super Mario Bros. released for the NES, with Princess Toadstool simply standing in for Mario’s former love interest, and dragon-turtle King Koopa a perfectly good ape substitute. Many of the company’s early games, such as The Legend of Zelda, took classic fairy tale stereotypes and formed a basis of a semblance of a loose-knit plot around them, which can perhaps be seen as lazy, but also has proven to be highly successful and a great way to build a foundation, as Disney can surely attest to.

There’s nothing wrong with fantastical scenarios like these in and of themselves, but using these women as simple MacGuffins with nothing to do or say wasn’t exactly satisfying either, and inundation with the same thing over and over again can lead to a skewed perspective. It’s good to shake things up and be exposed to more than a sliver of truth, and so those of us in the 80s who were lulled into a protagonist comfort zone had our collective minds blown with the removal of a helmet. Throughout Metroid nothing seemed abnormal to what we had become accustomed to as gamers…at first. Playing as a kickass bounty hunter going by the gender-impossible-to-tell-but-must-be-a-guy’s name of Samus Aran seemed like playing any other game. We ran fast and jumped high, killing monsters and uncovering new powers, just like with all our other heroes, who of course were awesome dudes. The world was at peace. But rumors began to surface on the schoolyard, spread by kids who somehow beat the game faster. After seeing for ourselves, what we thought must have been just another “my uncle works for Nintendo” urban legend turned out to be true: Samus was a girl. It was a sneaky and unheralded move that paid off in spades. Not only did this chick not need saving, but there was no guy in sight to pine over, no flowers, no daintiness; the only thing pink was a gigantic evil brain that Samus shot at and blew up with missiles. Just a woman and her arsenal of alien-killing weapons; finally a girl my 8-year old self could relate to. Even better, the game passed it off like it was no big deal, and so of course gamers followed suit. Metroid was different, and different is often cool, and so a franchise was born.

Nintendo surely took note of the positive results of this experiment, and for Super Mario Bros. 2 Princess Toadstool was upgraded from rescue mission to playable hero. She still was still ultra-princess-y, but her ability to use her pink fluffy dress to briefly float quickly endeared her to gamers who welcomed just a little forgiveness in their platforming. The future Peach fit naturally into this co-star role, but unfortunately she wouldn’t be available from the character select screen in a proper Mario until many years later. However, while she often serves still as the same mere plot device she orignally was, over the years Peach has at least participated in go-karting, sports, and whatever parties Mario throws, as well as comically lamenting her constant position of helplessness within the franchise via the Mario & Luigi games. Not a huge leap forward in characterization, but another of Nintendo’s princesses would fare better. Though Princess Zelda started off much like her Mushroom Kingdom counterpart in being a simple object for the male hero to save, with A Link to the Past on the SNES an evolution began to take place that has continued to the present day. When talking about a strong character people often confuse that with physical power or control, wanting someone who is a role model and confidently takes charge in their life. This is all well and good sometimes but misses the point: above all what a strong character does is serve an importance to the story, whether that be hero or villain, rescuer or rescuee, or anyone else along the way. They must come off as a being that thinks, has wants and needs, and makes decisions based on those, like real people do. Strength is mattering.

While still usually in need of Link’s services, Zelda also now has her own motivations and responsibilities, lending weight to her situation, which is often a result of sacrifice. Whether risking her own life for the sake of her kingdom by tossing an ocarina, donning a risky disguise in order to further the hero’s efforts, captaining a carefree pirate ship on the high seas in search of adventure, or imprisoning herself in crystal to prevent the rise of a demon king, Zelda has evolved into someone the player can relate to, the face of the struggle between good and evil at the center of each story. She’s sometimes noble, sometimes sarcastic, and often utterly endearing; in short, she has character. Instead of settling for the mere existence of the NES entries, Zelda has steadily developed into the heart and soul of the series. This, people, is a strong character.

Along with Zelda, many others who populate Hyrule have aqlso been given similar care. From the mysterious Midna who masks her intentions, obviously hurt and mistrusting, to Link’s loyal friend Saria waiting for his return, the sadly hopeful Marin always looking to the horizon, the misguided but understandable villainy of Hilda, and the wise but sassy Telma, looking out for Link and all of Hyrule at the same time. The series has done a fantastic job of showing all types of humanity, good and bad, and thus has seemed all the more immersive to its fans. Other Nintendo women have followed a similar suit. Palutena went from being a goddess only read about in the manual who somehow needs saving from a lesser mortal in Kid Icarus to being his cheeky boss in Kid Icarus: Uprising. Though she is not playable in either title, Palutena nevertheless is a constant presence in Uprising, viewed on the bottom screen, never leaving Pit’s side as she helps him fly while issuing orders and providing a steady stream of gentle ribbing. She also delivers much of the exposition as the action unfolds, and her personality is an essential element in making the experience so enjoyable.

As for the rest, Rosalina has overtaken Daisy as the secondary Mario princess of note, a protector-mother figure to the Lumas, needing help but not a rescue and a cheerfully passive-aggressive Isabelle keeps in contact and basically runs the town in Animal Crossing: New Leaf (admit it, you slacker). From the many complex women warriors of the Fire Emblem series to the sexual prowess and power of a witch named Bayonetta that uses her clothes-hair to summon demons while shooting guns strapped to her shoes, what Nintendo has done is promote a wide variety women in their games. While some may be derided as stereotypical, one look at the latest Smash Bros. roster confirms that they cannot be labeled as lacking in breadth, and with new creations such as Linkle on the way the number keeps growing.

It’s been a long time since Pauline was placed in a cage and the princess was in another castle, and in that Nintendo women have come a long way, baby.