After being woken up by the booming voice of The Colonel, you’re thrown into a suit of space armor and sent on a mission to self-destruct your ship then escape. Back at the safety of your new home base, you’re told about how The Archivists have taken over Earth and how you, along with The Colonel, Wilkinson, and Jasper, the ship’s AI, must destroy all the Archivist ships to save Earth.

Mothergunship is a hard game to put down. From the moment I started playing it, I was hooked. It pulls you in with a really funny script, but there’s a lot more to this shooter than simply shooting enemies. There’s procedurally-generated dungeons, an exceptionally robust gun customization system, and bullets. Lots and lots of bullets.

Gun building is one of the coolest mechanics I’ve seen done in a game in a long time. Instead of just having your regular gamut of guns – pistols, uzis, shotguns, automatic rifles, etc. – Mothergunship puts ALL the customization in your hands. There are three categories in the mechanic – connectors, barrels, and caps. Connectors allow you to expand the size of your gun, barrels shoot, obviously, and caps can add buffs, like ricocheting, less pushback, etc.

There are only two rules with gun building; barrels must face forward, and all the pieces have to fit. But once you have that gun built, watch out. You can put together some really mean pieces. I’m talking shooting ricocheting sawblades in your left hand while you fire off a railgun in your right, but the railgun also has a grenade launcher and you can’t stop smiling because it’s so fucking awesome. 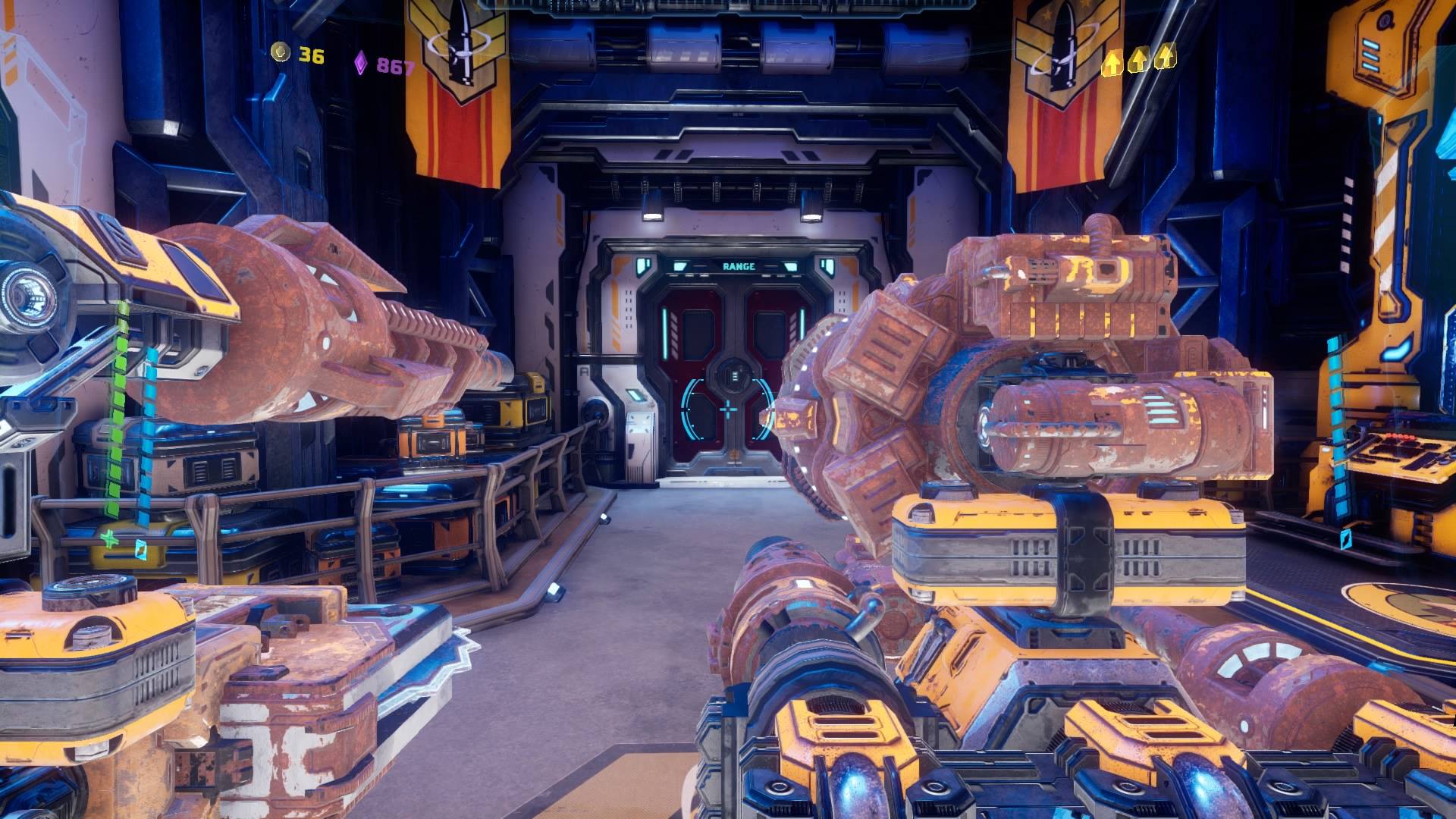 You have the ability to build guns while not on a mission and test them out in a separate area of the ship, which makes some of the tedium of choosing your loadout easier. But watch out – if you die during a main mission, you lose any of the gun parts you brought with you, or found during the mission. Luckily, you can always find more during side missions.

Once you’ve chosen a side or main mission, it’s time to get to work. Both missions function the same, in terms of gameplay. You crash your pod into the ship and are given a chance to build your gun/s before you start. From then on, each ship is procedurally generated. You walk into a short hallway which will give you a screen showing how many enemies you’ve killed, damage dealt, etc., and you can see what the “threat level” of the upcoming room is. 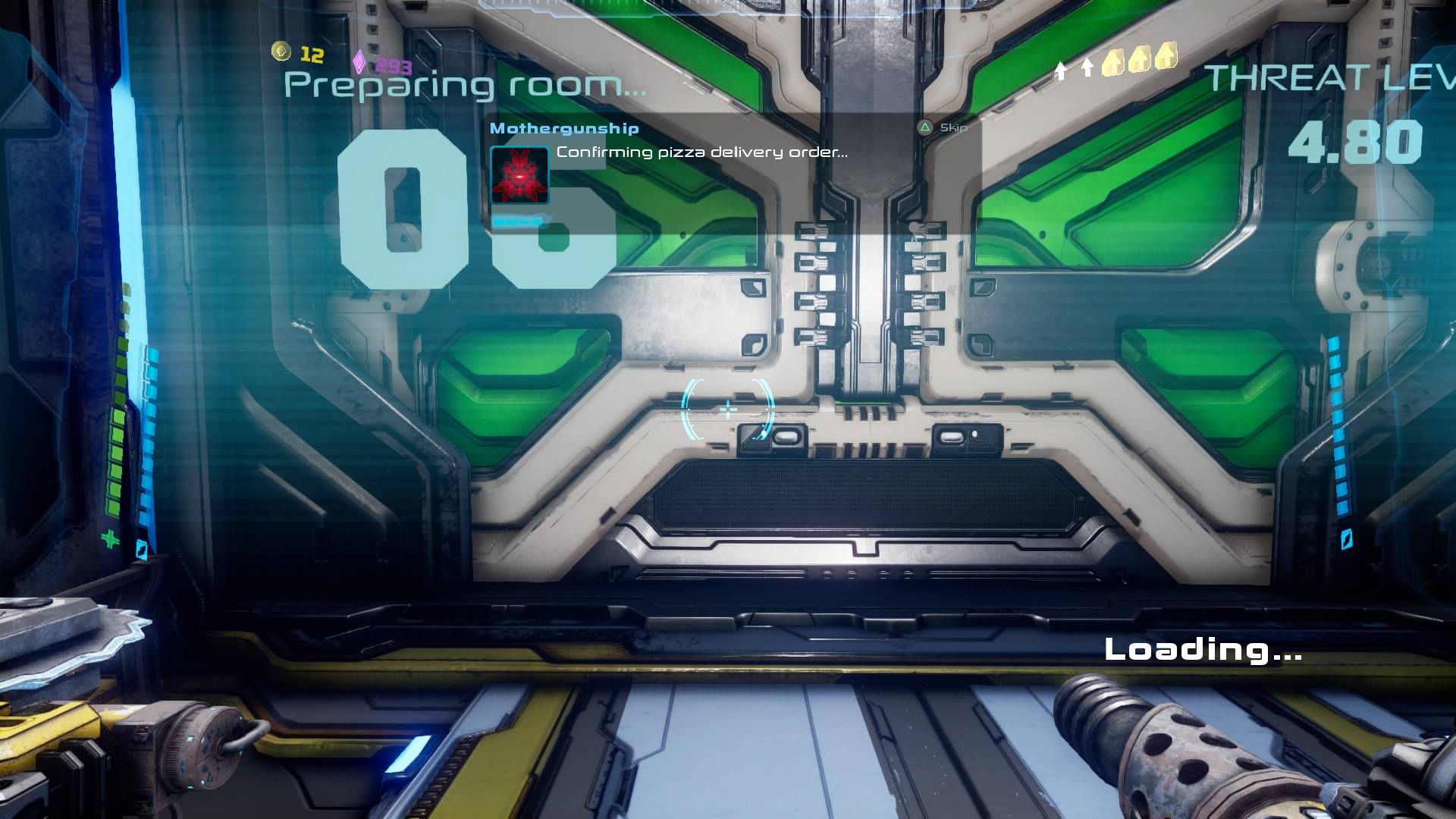 Each room will spawn in random enemy types and numbers. Luckily, there are multiple ways to leave a room, and you can leave before destroying all the enemies, which is a nice touch for those super difficult rooms. You can leave through a ‘dice door’, which could lead either to a really easy or really hard room, a normal door, which has no special properties, or a challenging door, which tasks you with completing a certain challenge in that room. Some rooms may also contain a shop, but this can only be accessed if you destroy all the enemies in the room.

The game has a very good soundtrack, but the sound does more than just hype you up. It really gets going when there are enemies in the room, but quickly fades out when the room is clear. This is a nice touch when you want to use the shop, but don’t know if you’ve taken out all the enemies. I found myself using that a lot. The voice acting is also top notch. The script is very funny and doesn’t feel stale. The art is also very good. The ships all have a very ‘clean, but lived in’ look; everything is sharp, but there are random scratches and marks on stuff. It’s a very nice touch.

All in all, Mothergunship is a must-have for fans of shooters, bullet hell, or just plain fun arcade-style games. It’s got tons of replayability with Endless mode, 20 (21 to be technical) trophies/achievements, and will soon have a Co-op mode. I can also see this getting big on the speedrunning scene, as the RNG of the guns and the fast-paced nature of the gameplay is a natural fit. Grab Mothergunship as soon as you can.