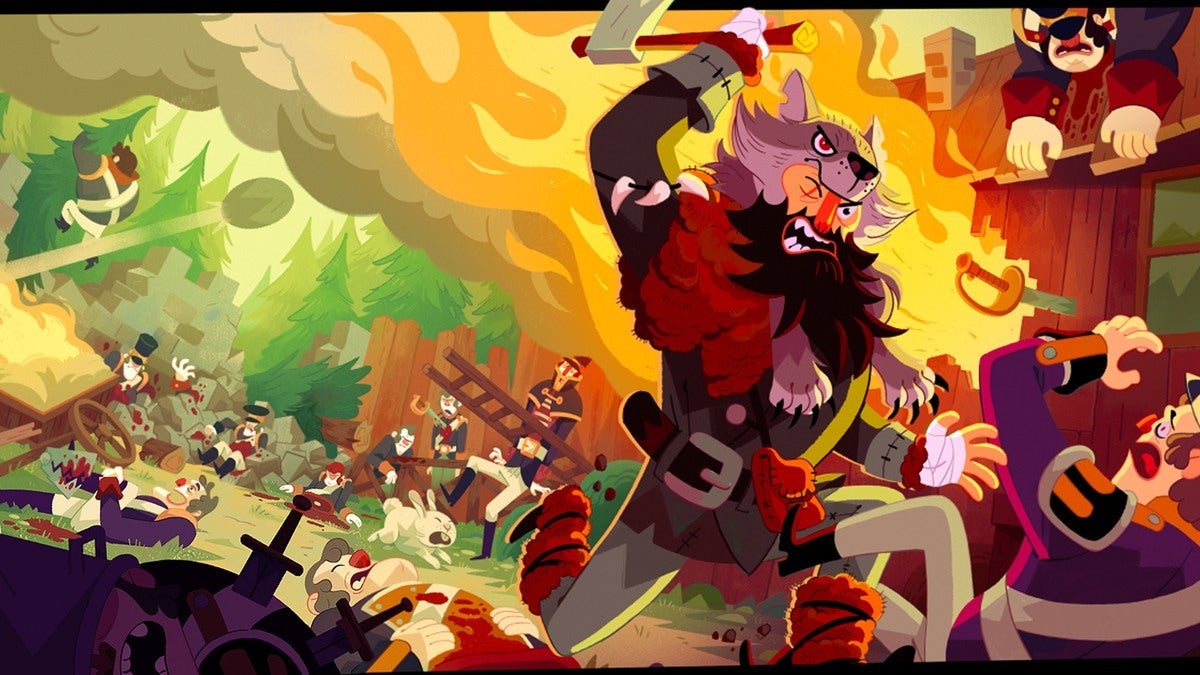 Bloodroots is almost exactly what you would want from a video game that looks and plays like an overhead view of a well-paced rapid-fire Genndy Tartakovsky-themed bloodbath. From the opening sequence to the end credits of its episodic story, Bloodroots‘ brief moments of silence are the only times in which your neurons will not be firing away attempting to react as fast as possible to its relentless action-centric gameplay–and that’s for the absolute best.

After being betrayed and left for dead, Mr. Wolf embarks on a journey of revenge to find his killer. Outnumbered and outgunned, it is your job to improvise your way through a dangerous land to discover why you were betrayed by your fellow members of The Blood Beasts gang. Without spoiling anything, the story and overall writing of Bloodroots is, unfortunately, the only missing link to fulfilling Genndy Tartakovsky’s brand name. While the story starts out interesting, it never truly evolves into anything significant or captivating for the player. The ultra-violent and somewhat comedic gameplay on top of Bloodroots’ bold visual style are the main reasons why you will be hooked for well over half a dozen hours.

In Bloodroots, the world is Mr. Wolf’s weapon–or at least the items that can all be utilized as tools for cutthroat action are. Quick improvisation is the key to success when tackling each tight situation you encounter as you Jackie Chan your way to victory. With a few exceptions, every weapon you pick up typically lasts between one and three kills. Once your weapon durability hits zero, the item will vaporize in your hand and leave Mr. Wolf’s enemies more than enough time to strike him down.

With only one life to spare, well-timed weapon exchanges and elevated positioning are the only ways to keep your kill count on the rise as you creatively think through each scenario. Weapon combos allow you to quickly navigate your way around each dense and compact zone, and every single stage is designed meticulously to allow players to potentially clear them within one combo if they are fast enough.

Bloodroots is a brutal test of endurance and thought.

The gameplay might be centered around a simple time attack-type goal, but it is consistently a test of endurance and inclination. Constant reconnaissance, practice, and level resetting is required to achieve the best possible timing, and the online leaderboards of Bloodroots only create a more rewarding payoff for those willing to go the extra mile with their planning.

Every time I watched someone else step into the action I found myself thinking, “Damn, how the hell did I never consider doing that?” In this way, the action simply becomes insatiable once you see how the best of the best tackle each act. Achieving high letter rankings and short clear times feels truly rewarding, and being able to compare how you did with friends and players around the world is all the more reason to fuel your hunt to become the champion.

The visuals of Bloodroots paired with the instant action is what makes every axe swing, cog throw, and flamingo strike breathtakingly more fulfilling than the last. Any fan of Genndy Tartakovsky’s work will easily spot how much shows like Samurai Jack, Clone Wars, and Primal impacted the game’s visual development. From the way characters swiftly run and are structurally designed to the cinematic finishing blows, Bloodroots never holds back from embracing its flashy and unique aesthetic inspiration that many other action games fail to replicate. Its style results in one of the most enjoyable indie games to watch others go nuts with as they compete to see who can slaughter thirty goons in a single act the fastest like Samurai Jack charging into Aku’s followers.

Besides some minor bugs that Paper Cult plans to address with a future patch, the one gripe players will have with Bloodroots is the promising hat collection feature. Mr. Wolf’s white wolf hat is interchangeable with a wide variety of cute and monstrous animals to don throughout your journey. Every hat you collect provides unique abilities, but there’s an oddly frustrating catch. With the exception of the fish “out of water” hat that reverses your controls, every other hat’s ability does not take effect until you finish the level you found it in. Completionists will surely have a blast messing around with this feature, but those who typically play through a game once will simply be missing out.

While this particular problem will be non-existent to PC and PlayStation 4 owners, there is one notable issue with the Nintendo Switch version. While the game runs perfectly fine in handheld and docked mode, its distant overhead view can sometimes make the action difficult to see when playing on the go. If you plan on playing Bloodroots entirely in handheld mode, the good news is that the game looks gorgeous and still plays as buttery smooth as docked mode. The bad news, however, is that sometimes character models can look like ants. This is only an issue for a small portion of the overall package, but it affects a few notable areas nonetheless; it can seem impossible to track enemies during some of the later levels of Acts 2 and 3, for example.

If you’re a fan of Genndy Tartakosky’s work and overhead action games, Bloodroots is perfect for you.

Independent developer Paper Cult has crafted one of the most unique arcade action games in recent years, but Bloodroots still feels like it’s only clawing at the surface of its potential. It’s a murderous good time with a ridiculous fun factor worth every penny. It’s a game that lends itself to being passed around by friends in attempts to achieve the lowest time limit scores on a Friday night. However, a fresh coat of ideas slathered on top of the already magnificent groundwork should become the primary focus going forward. Whether it’s multiplayer, an actual time attack mode, some sort of online, a new campaign, or even an entirely new entry, Paper Cult is going to have a future worth following if this is only their second project to date. Outside of lackluster storytelling, they practically nailed it all.

Bloodroots is available on the Nintendo Switch, PlayStation 4, and The Epic Game Store. For more information, you can visit Paper Cult’s official website right here.