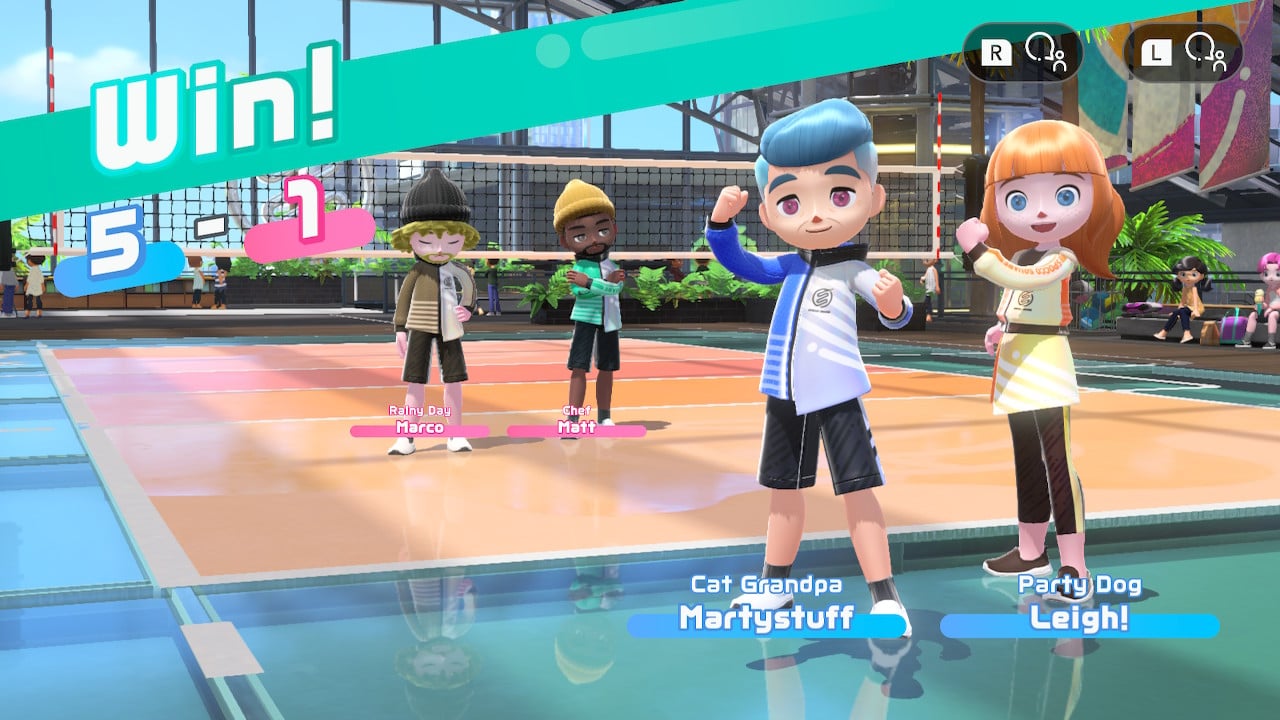 What are the best Switch Sports Games?

Nintendo Switch Sports has finally arrived in all of its Joy-con swinging glory. The long-awaited sequel to the cultural moment that was 2006’s Wii Sports (and its less well-remembered sequel, 2009’s Wii Sport Resort) brings six mini motion-controlled games to life in living rooms across the sports-loving land.

It’s been too long since we’ve scoffed at the notion of a wrist strap and then ducked as a controller flew by our heads. Thankfully, Nintendo has somehow rekindled much of the magic of the original Wii Sports with some welcome updates and polish in Switch Sports, building on old games, adding a few new ones, and adding a most-welcome online infrastructure that thus far works relatively well.

But which of Nintendo’s newest take on casual-cade is most likely to get Grandma back on her feet and ready to swing a virtual racket? Goomba Stomp is here to decide for you in our definitive and highly scientific take on:

”Which Switch Sports Games Are The Most Fun?”

Or ‘football’ to our frenemies across the pond, however you want to punt it, this new edition to the Switch Sports lineup is a bit of missed kick. On the one hand (or foot), it’s good to see Nintendo try to stretch a bit with the formula of their simple Sports series. Unfortunately, the result is hard not to note as No-Fun-Rocket-League (the game we were all clamoring for).

Clearly inspired by the aforementioned futuristic game of fast-paced soccer cars, in Soccer you are asked to kick an oversized semi-futuristic ball into an oversized semi-futuristic goal. It steps well outside the formula of other Switch Sports activities by simply giving you analog control of your character to move about the field, with swipes standing in for kicks, and the misguided intention of extra fun if you use your patented leg-strap.

Unfortunately, it just isn’t very fun. The motion controls feel ill-suited, the field is too big, and the stamina bar is too limiting. It’s a shame, as this could have been really entertaining if it held better to the ‘less-is-more’ philosophy of the games that hold up best.

Here we might hit some controversy, as Chambhara has many fans and defenders, and rightly so. Chambhara is another word for “sword-fighting,” and in it you match up with a foe and swing swords.

There’s an entertaining bit of strategy to this Switch Sports offering. As you are trying to push one another off of a platform, you’re essentially trying to predict their swing directions and blocks and counter them, gaining ground when you succeed. And if you want to get wild, you can even double-wield.

Chambhara swings best with two willing friends in a room together, but it suffers from its tendency toward flailing. In essence, the controls feel in many ways like the Wii-mote sword-play of the original Legend of Zelda: Skyward Sword. If you are in the wondrous minority who long for that Hyrulian-flail again, you’ll be in dueling heaven.

And for the rest, it’s still a good time, it just suffers from a limited long-term appeal.

Another new activity in the Switch Sports mix, Volleyball aims to transport you back to your most awkward and frustrating moments in a high school gym and largely succeeds.

Volleyball has something of a new feeling among the Switch Sports games, particularly in its pace, which will admittedly not be for everyone. In essence, you serve, bump, set up a spike, and on defense, you aim to bump back or block.

Tutorials are oddly missing from a few of the Switch Sports offerings, but Nintendo includes one here, and it’s necessary. The move-sets require a bit of practice, and what’s most striking is that it moves slower than any Sports game we’ve yet seen. But within that slowness, it is also quite responsive.

If you can get past your gym class nightmares, find the rhythm, and most importantly, have a chance to play with friends, it can become both strategic and fun and is a most welcome addition to the sport-o bunch.

While one has a birdie and the other a ball, it is tricky to rank Badminton against Tennis, as they have a very similar feel.

In fairness, while in essence, you are still hitting an object back and forth over a net, there are somewhat different strategies at hand with Badminton outside of just the racket size. In Badminton, your timing is more tuned to the arc of the birdie than the timing of the bounce and hit. Nonetheless, the decision to make a full 1/3 of your six featured sports extremely similar feels a touch odd.

All that said, Badminton manages to be different enough to be well worth a go and earns a strong nod as a new Sport in the Top 3.

Badminton is strong but not strong enough to dethrone the waggle queen that destroyed the hearts and televisions of a generation: good old Tennis.

Tennis feels largely like it always has, and if you’re here for that, then you’re here for a good time. The addition of the “ghost” partner in one-player can feel a touch off-putting, but in essence, your partner is just playing closer to the net, and there is no need to be afraid.

Tennis is interestingly as much about rhythm as it is about athletics. It is and always has been tuned to the timing of your returns (as opposed to the aforementioned arc in Badminton), and when you achieve the blissed-out state of Wii..ahem…that is, SWITCH Sports flow, defenders beware.

And truly, Tennis shines best with a partner, or best of all with two pairs of friends. You’ll feel like it’s 2006 all over again as you swing and curse your way across Spocco Square.

What’s better than bowling? Nothing, that’s what.

Many and more humble Wii Sports fans found their way into the halls of waggle through Tennis but then stayed forever as they found the magic of the ten-pin split.

Despite the lack of 100-pin mode and with a slightly tweaked feel, Bowling still manages to be the most fun mode in Switch Sports and fully conjures the joy of the original.

Arguably where the Joy-Con implementation shines brightest, the new and more subtle controls reward precision and honestly create a strong case for a bowling game all its own. We stand ready for Team Wario’s bowling jersey, Nintendo.

Here, too, online really shines, with challenging and fast-paced match-ups that will keep you coming back for more.

Bowling is and ever was the best, sill fun as heck to curse that missed spare any day of the week.

Special mention to the wall Tennis that can be played against the credits. Turns out it’s highly addictive to whack a ball at the alphabet.

And there you have it, sports fans. In the days to come, Nintendo has also promised us some Golf, and we’ll be sure to report on it when it drops.

The hope is that we’ll see still other new and old Sports pop into the Switch Sports catalogue, as while there is plenty of fun to be had in this little pile of sports, the one thing you’ll probably want is more sports. We’re looking at you, Archery, and we’re hoping for you, Undersea Chess.

But for now, what’s on hand, particularly at the relatively reduced price point, is well worth it for Sports enthusiasts of days gone by. Get ready, Grandma; it’s time to dominate the court again.