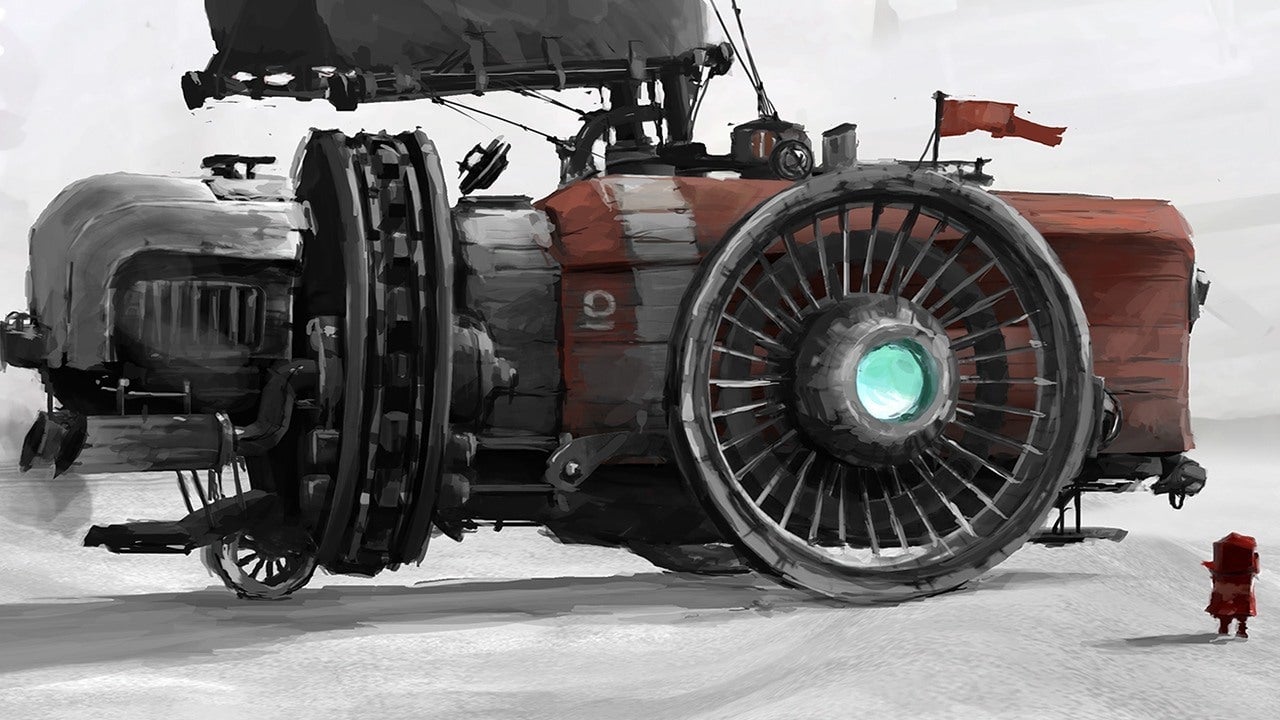 At first glance, FAR: Lone Sails might remind you of games like Inside and Limbo, and the comparison seems justified since the debut title from Swiss developer Okomotive resembles both the look and tone of Playdead’s indie darlings. Much like Inside, FAR: Lone Sails is a 2D side-scrolling adventure about an unnamed, ambiguous child who sets out on an unclear journey through a barren wasteland. And like Inside, it’s a slow, contemplative, and mysterious trek in which you are left to piece together subtle clues as to what has happened. After opening on a somber note with our unnamed avatar paying their respects at a grave, you set out on your adventure, traversing across a world that one can only assume was demolished by war.

The opening few minutes of FAR: Lone Sails feels all too familiar, but it doesn’t take long before the game sets itself apart when introducing your main mode of transport: a giant, jerry-built land yacht that’s driven by a massive engine and a collapsible sail. Climbing on board, you’re presented with the challenge of piloting the large contraption while also finding ways to fuel the machine in order to keep the engine running. What makes FAR: Lone Sails so unique is in how developer Okomotive centers the entire game on the method of travel itself. Said vehicle becomes your companion — a character of sorts — which is ever-growing, ever-changing and always in danger. In order to succeed, you’ll need to protect your vessel while controlling both your protagonist and the land yacht in order to get from point A to point B. Neither you nor the ship could make this journey alone.

“Its the not the Destination, It’s the journey.”

The journey itself is relentless but beautiful, harrowing but tender. It’s slow to unravel and just as slow to maneuver, but FAR: Lone Sails is also a game full of intrigue, since you never know what lies ahead as you travel across the desolate wasteland. The destination remains a mystery, and while it isn’t really important where you’re going, an overwhelming sense of curiosity fuels your desire to keep pushing forward.

There is no narration. There are no screen prompts. There are no cinematic cutscenes to be found. Whatever “story” there is, is left intentionally vague. You know you are alone — hopefully not the last person alive in this post-apocalyptic world — and your only hope in finding civilization is the vehicle you board.

Ultimately, the world outside of your ship doesn’t matter so much. What matters is survival, and lucky for you, the vehicle you steer is equipped with engines that can turn any solid matter into hydro energy. Along the way, you must collect wooden boxes, barrels, lanterns, and other objects littering the road that you shove into the compressor to fuel the ship; only these objects are few and far between, making each one extremely valuable. By holding down the ignition lever and releasing steam, you’ll be able to start the engine and drive the hulking machine across the dry ocean and abandoned desert settlements. There will be some time to reflect, but before you know it, you’re running out of fuel yet again, and scrambling to find ways to coax your ship onwards. And just when your craft is running smoothly, you’ll be brought to a halt by various obstacles standing in your way. With these roadblocks, FAR: Lone Sails presents various puzzles for players to solve, and while they’re generally not too challenging, they do serve to pick up the pace, add some suspense, and liven up the proceedings. More importantly, overcoming every obstacle feels like a hard-earned achievement.

Unlike Inside, there are no villains standing in your way. Instead, your one and only true enemy is Mother Nature, and over the course of your adventure, you’ll battle strong winds, heavy rain, and lightning that will strike your vehicle and set it on fire, requiring you to grab a hose and consume valuable hydro in order to extinguish the flames. Throughout the trip, wear and tear will also cause problems and it’s extremely important to upgrade your carrier, repair any damage, and use your sails whenever possible.

FAR: Lone Sails is a masterwork of quiet poetry. It culminates with one of the best endings in all indie games, and features stunning landscapes, a brilliant orchestral soundtrack, and just enough downtime to allow players to appreciate the beauty. Most welcome is how it allows you to zoom in and out of the default view in order to get a closer look of what surrounds the protagonist, and expand the view to gasp at a gorgeous and vivid art style which seems inspired by the likes of artists Theo Jansen and Tony Couch.

What at first appeared to be just another indie game riding on the heels of the success of Playdead Studios soon emerged with its own unique voice and identity. Where Inside weaves a dark, unsettling tale, FAR: Lone Sails is a far more peaceful journey. It might just be one of the most heartfelt end-of-the-world games yet made: bleak, but also stirring and beautiful and optimistic. Not bad for a game made by a development team that at the time, was comprised of university graduates.