Of all the various anime airing this season, Zombieland Saga is certainly one of the most unique. Its queer fusion of zombies and idols looks like a trainwreck on paper, yet works to such brilliant lengths in practice it seems like the most logical combination in the world. Each and every episode has been a blazing conga line of slapstick comedy that often leaves me gasping for air in between spurts of uncontrollable laughter.

That is… until one of the most recent episodes.

Episode six, “Because It’s Sentimental SAGA,” represented a tonal shift for the series. It took a step away from the blistering comedy to pull back the curtain a bit on the main story and, at first, that seems a bit jarring. As the episode went on, though, it became apparent that this whiplash was entirely intentional and posed some interesting questions about modern day net society as a result.

The primary conflict of the episode revolves around Junko’s refusal to take part in a fan meet-and-greet event. For the first half of the episode, her outburst comes across as unreasonable, childish even, considering that she is one of the two veteran idols in the group of the walking dead. It becomes easy to side with Ai’s part of the argument, that Junko is acting unprofessional and needs to get her act together. Zombieland Saga effortlessly lures the viewer into this line of thinking. 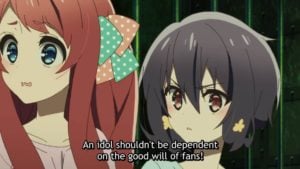 That’s when we’re reminded, though, that Junko lived in an era different from our own. The Showa period, specifically, which ran between 1926-1989, and it’s implied Junko’s fame and death was towards the latter end of that timeframe.

Junko came from a time well before the internet was even conceptualized. Newspapers, magazines, and television (or the “tube,” as she called it) were the only means she had to communicate with her fans. There was always a sort of barrier that separated her from the people that adored her, and because communication was so much more difficult at the time, that was acceptable.

Then the internet came around. More specifically, social media came around, and the entire ball game changed. Suddenly it became as simple as a few keystrokes and a button-click away for any single person to insert their thoughts and actions into other’s lives. 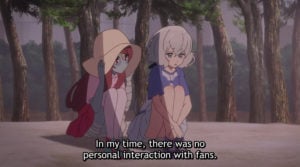 Popular groups and figures having a Twitter or Instagram is a given and expected, as shown by the magazine editor’s confusion at Franchouchou’s lack of one in the beginning of the episode. To get an edge on exposure, groups began to create events to interact with fans in person, and thus birthed the idol sphere of modern-day Japan.

To have that constant presence in her fans’ lives is something completely foreign and incomprehensible to Junko and, in her eyes, violates her privacy. Her visceral reaction highlights just how much the Japanese idol landscape has changed over the decades.

Now idol culture is a rabbit hole that we’re not going to dive into further, but here’s the thing: even if you know nothing about or don’t care for idols, Junko’s perspective can be applied to a wide variety of content creation.

There are countless self-sustained content creators who make their living purely off of their craft. To state the obvious, they can do so because they have fans willing to consume their content, and they will live or die by the hands of those same fans, much in the same vein as idols.

The impetus to promote their work is on these content creators alone, and word-of-mouth can only go so far. Do you have a favorite YouTuber? Perhaps a favorite cosplayer or artist? Chances are they have a Twitter, or an Instagram, or a Pinterest, etc. and chances are those accounts are very active. That’s because what better way to garner a fanbase than being able to talk and interact with them directly. It’s a way to stay competitive and viable in a market whose interests can shift by the hour. 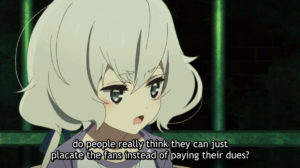 Now let’s circle this back around to Zombieland Saga and Junko. The way Junko would perceive this explosion of social media would almost undoubtedly be the same way she has the idol world.

We, the fans and consumers, have taken the presence of social media and its inseparable relationship with content creation as given fact, as something that is natural to (co)exist. Junko serves as a counter-force to that inertia and compels us to reevaluate our current situation.

When did this become the norm? Why is this the norm? These aren’t big name celebrities constantly in the limelight. These are simply motivated and passionate individuals who often create content from their own homes, yet are nonetheless expected to put their lives on display. The level of bewilderment Junko feels is the same as if a grocery clerk was suddenly told to keep an active Twitter account in order to keep their job. It feels absurd, regardless of the individual’s willingness to do so. 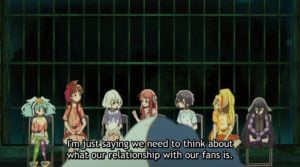 On one hand, this is emblematic of our globalized society as a whole. How we are more interconnected and dialed in than ever before. On the other hand, sometimes it’s important to take a step back and ask these questions. When an individual can receive something as disgusting as death threats for something as misplaced as a poor anime episode, then maybe the system isn’t as good as it could be.

Obviously, social media isn’t going anywhere fast, and it has done more good (probably) than it has bad. When one really stops to think about it though, the expectation the general public has of social media is strange at a conceptual level. The fact that Zombieland Saga, a slapstick comedy of all things, was able to slyly slide these ideas in without heavily detracting from its own nature is downright impressive. It triggered a whole cascade of thoughts and all it took was for one character to say, “Hey, this is weird! How can you not think this is weird?”

You can watch Zombieland Saga on Crunchyroll (subbed) and Funimation (dubbed).

‘FLCL Alternative’ is Different Where it Counts