15 years is a pretty long time, but that’s just how long The Venture Bros. has been around on Adult Swim. Outliving its early-2000s brothers-in-arms like Harvey Birdman and Sealab 2021, six seasons and a few TV specials later, it’s clear that the show is in a league of its own.

Drawing inspiration from bygone eras of cheesy action, adventure, sci-fi, and espionage — like those found on the pages of Tom Swift and early “Marvel” books, or in the on-screen adventures of Johnny Quest — Venture Bros. churns out a heavy blend of sometimes high-brow, sometimes low-brow satire and dark, emotional comedy.

This is accomplished with a range of revolving main and minor characters, like the titular “Venture” family, comprising of washed-up super scientist and once famous boy adventurer Dr. Venture, his would-be Hardy Boys twin sons, Hank and Dean, and their superspy — and at times unhinged — action hero bodyguard, Brock Samson. 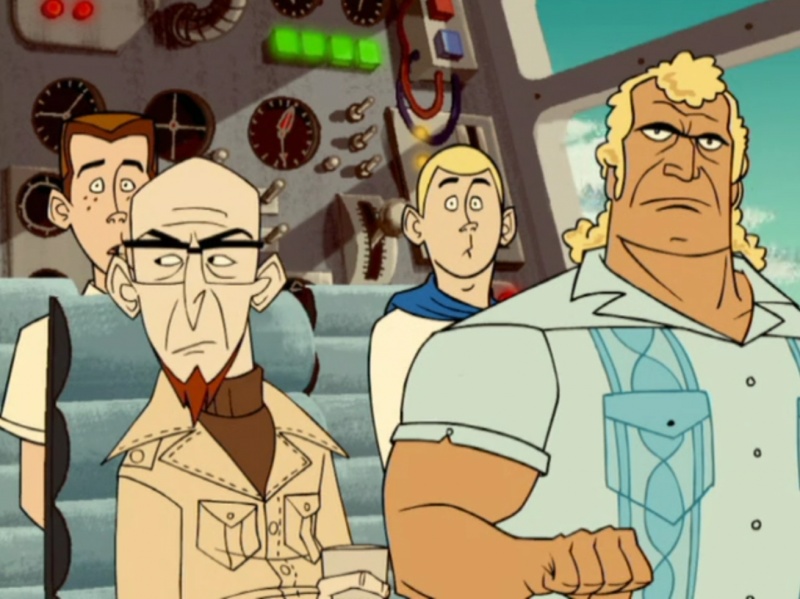 The Ventures and their bodyguard, Brock Samson, as seen in the Season 1 intro sequence.

Additionally, Dr. Venture’s self-proclaimed arch-nemesis, The Monarch, and a whole host of other supporting good guys and baddies join the ranks in exposing their own inner trials and tribulations.

The success of Venture Bros.‘ longevity could be perhaps attributed to its low number of episodes produced throughout the years — a focus on quality over quantity. But a truer analysis might yield something more: that the show’s success is in its unique approach and spirit, held higher in its production than most any other technical element.

The initial, conceptual premise of The Venture Bros. is based in a satirical celebration of retro sci-fi adventure novels, comics and TV, but it’s the spotlighting of a subversive, alternative pop culture mind-drip that gives the show its unique presence. 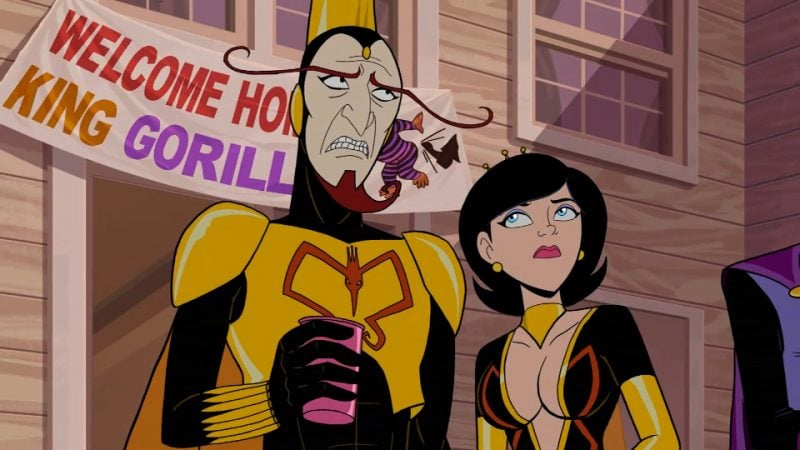 Referential humor can be a little difficult to accomplish if its sole purpose is a callback, and it’s not something The Venture Bros. is above. Instead, it’s that brand of humor’s utilization, especially in the show’s early years, which marks itself different — akin to raising a freak flag.

Personally speaking, when Venture Bros. first came around, there weren’t simply that many shows that would tap into my love for cheesy old adventure cartoons and comics, mixed in with off-handed remarks about whether Martin Gore is gay or not, or if someone is a poseur for calling Changesbowie their favorite David Bowie album, or if there really is such a thing as “retard strength” (the latter two being real conversations I had that I was surprised to see recreated within the show).

Going beyond just mentioning niche references, the manner of conversation between the show’s characters is what seals the deal, brilliantly written in tones ranging from unusually casual vulgarity to emotionally misplaced diatribes, and monologues not dissimilar to the two cops from the 1981 Hitchhiker’s Guide. The show’s brand of attention to detail to its non-mainstream references is more of an invite to inside jokes among friends with similar interest, and less like a calculated throwaway “bazinga.” 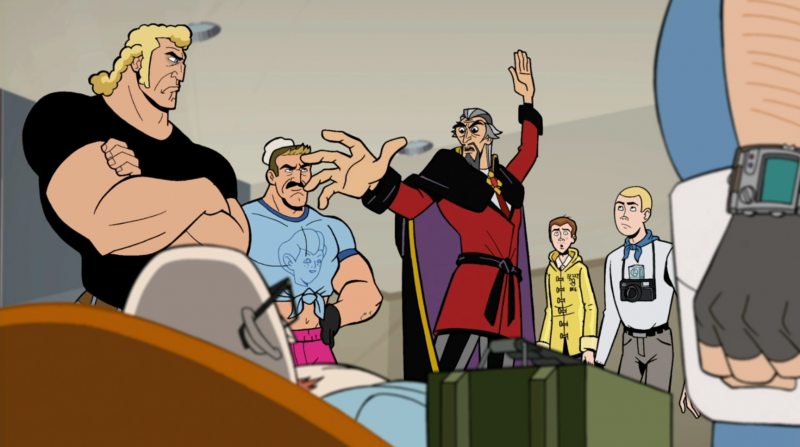 Dr. Orpheus and Shore Leave are two of the show’s most fan favorite recurring supporting characters. (“The Venture Bros”)

And that’s another thing — ‘geek’ and ‘alternative’ culture, having now grown into a corporate meme commodity, has changed quite a lot since 2003-4, and how the culture of Venture Bros. predates this era where you can buy something as confounded as a murdered, wrapped-in-plastic Laura Palmer Funko Pop is significant.

The Venture Bros. sensibilities have remained within the time-frame of the early 2000s, even after the show’s drastic shift in scope and animation quality, and that’s a great niche for it to fill. If the upcoming season will budge to today’s puritanical and speech-controlling movements remains to be seen, but the show’s track record helps in dispelling that worry.

There’s something very MySpace-esque about the lens through which I perceive Venture Bros., like a time capsule moving forward through — well, time. It’s the strength of the show that separates it from most everything before, during, since, and in the future.

As probable self-inserts of the show’s co-creators, Pete White and Billy Quizboy grew from minor characters into a major part of the show. (“The Venture Bros.”)

The “inside joke” analogy goes a bit deeper when looking into the language and world-building which makes up The Venture Bros.

A lot of the show’s identity comes from creators Jackson Publick and Doc Hammer’s friendship, the tangents into referential gags and as comedy bits — all based on shared interests — that they’d come up with in their art studio before Venture Bros. had become a fully-fledged idea.

Talking about these clubhouse years in the newly released Go Team Venture! The Art and Making of The Venture Bros. book (of which I’ve only read 20 pages so far but, mini-review: it’s incredible), both make it clear that it’s this joking around and syncing of their wavelengths that laid the foundation for what later became the show’s language.

It’s reminiscent of how The Mighty Boosh (a sister-show, at least according to me) co-creator Noel Fielding once jokingly described his and co-creator Julien Barret’s writing style as taking an aimless walk in the woods while improvising characters and plots, and then having a season’s worth of writing done by the end. 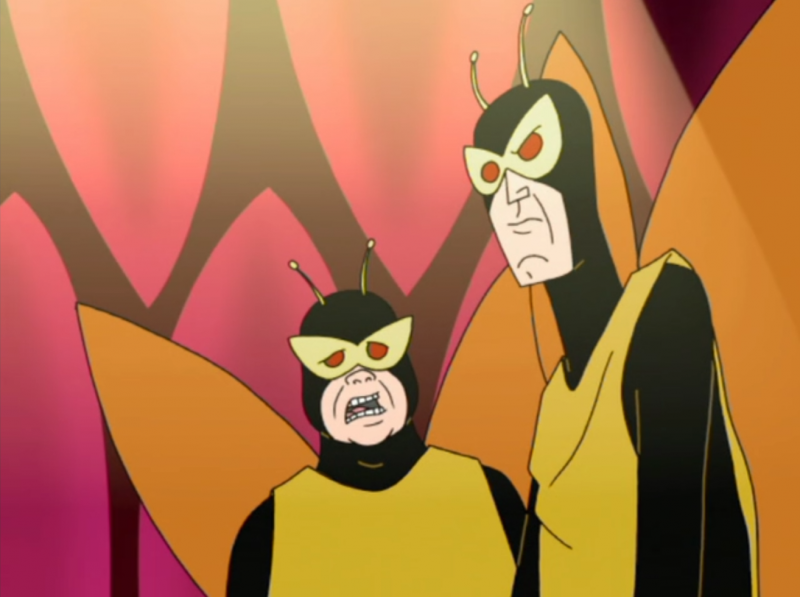 Henchman 21 and 24, two of The Monarch’s finest(?) hechmen, have become more prominent fixtures as the show has gone on. (“The Venture Bros”)

And like with Mighty Boosh, a draw for Venture Bros. is its information overload of a world, where hundreds of characters pop in and out at all times, where even the most minor characters are treated with the same kind of love and attention that would go into a major recurring character.

It’s a throwback to “G.I. Joe” toy lines, with their plethora of oddly named heroes and villains, part of a world where there are way too many secret government and evil spy organizations to count. It’s a totally understandable tendency to see this practice parodied within Venture Bros., as someone whose childhood involved imaging up imaginary action figures and super soldier stories.

Of course, the comedy and tragedy — often one and the same — of Venture Bros. comes from breaking down these action-figure archetypes into real people who do superheroing and villainy as a job; it’s an exploration into the kind of mentally messed up people who would even want to do something like don an elaborate butterfly costume to chase around a super scientist, or the kind of losers who would join up to become henchmen fodder, or whether these bad guys are unionized or not.

It’s this humorous, indulgent exploration of a kind of “behind the scenes” of Johnny Quest where the heart and soul(bot) of Venture Bros. lives. 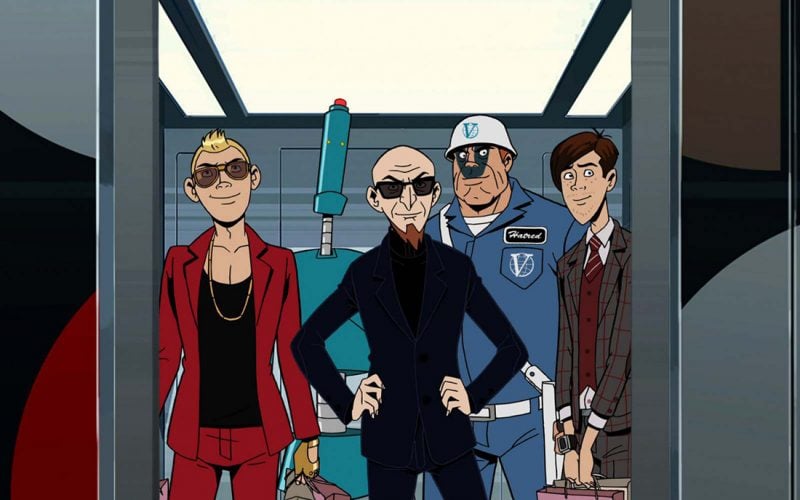 The Venture family by Season 6, alongside H.E.L.P.eR. and Sgt. Hatred/Vatred (“The Venture Bros.”)

At this point in 2018, with the premiere of Season 7 set for August 5th, Venture Bros remains still in its own slot (metaphorically speaking) in the television universe. Fifteen years later, The Venture Bros. has evolved into something other than a simple series of events serving as a parody to its influences — a world fully-realized and populated of its own doing.

What has remained true is its inception and purpose for existence, which seems to not have gone by the wayside for Jackson Publick and Doc Hammer — a rarity for a long-running show. The show’s art style could be changed to CGI, or have its cast replaced by sock puppets. It simply wouldn’t matter.

As long as the spirit of The Venture Bros. remains, the rest will always come together.

“…the show’s track record helps in distilling that worry.”

I assume you mean “dispelling” that worry.

Thanks for pointing out the typo.

The author has no idea about how these shows work. Especially on Adult Swim. They don’t survive on individual merit alone. You like the show, fine; but that’s not why it survived longer than space ghost. Do some research.

This opinion piece is about why I think it’s still a good show (in quality) after all these years, not why it didn’t get dropped by Adult Swim.