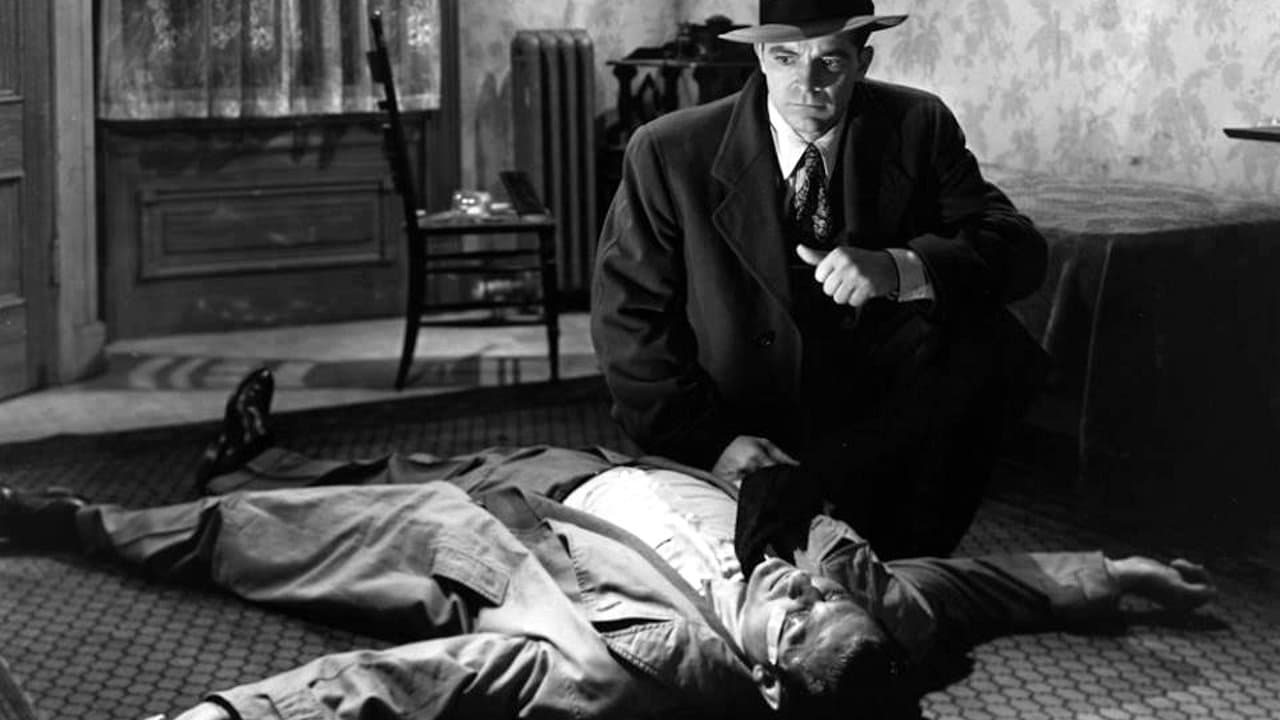 To those paying attention, film history teaches that groups of like-minded artists enjoy working together. The better the result of their initial project, the higher the likelihood the same team shall reconvene to produce one, two, or more films, hopefully of equal or superior quality. Some time ago in this column, Otto Preminger’s 1944 Laura was reviewed, a brilliant picture about a detective falling in love with a believed-to-be-deceased woman based on her stunning portrait, starring Dana Andrews and Gene Tierney as the lovers in question. Six years following said sumptuous collaboration, the same director-actors partnership brought audiences Where the Sidewalk Ends, an equally bittersweet tale of misguided love.

The set-up to Preminger’s 1950 film makes it come across as something of a spiritual precursor to Nicholas Ray’s On Dangerous Ground, which would come out two years later. Detective Sgt. Mark Dixon (Andrews) has it in for all the criminals that roam the streets and prey on the meek. His voracious attitude when hunting down outlaws has earned him severe warnings from his superiors more than once. Be that as it may, Mark is on a mission to squash crime like someone with something to prove. His latest case, involving the death of a rich gambler following a run-in with an enforcer, Ken Paine (Craig Stevens), spirals out of control when the accused, uncooperative in the face of Mark’s sternness, lunges at the cop. Mark defends himself as best he can, accidentally killing the man. Now Paine’s relatives, ex-wife Morgan (Tierney) and stepfather Jiggs (Tom Tully) find themselves involved in a murder case with two layers thanks to Mark’s unfortunate act. To top it off, Mark begins to have deep feelings for Morgan…

There is no shortage of films, of the classic noir period or any other, in which the protagonist is a cop enraged at the world’s criminal tendencies. They cannot stand for any unlawful activity, seeing criminals as parasitical social manifestations that must be dealt with swiftly and with unrepentant force. As stated, Nicholas Ray would make a film with a near-identical central figure only two years later. Different directors and different actors can, provided they are up to the task, extrapolate entirely different ideas, stories, and themes from that same premise. Andrews and Tierney, and director Preminger, had already collaborated for Laura, ensuring that a level of comfort existed upon embarking on this project. That comfort level is easily detectable watching this film, with both Andrews and Tierney putting in exceptional work as two characters completely different from those they played in Laura, yet once again drawn together with unmistakable chemistry under morally compromising circumstances.

Andrews is no Robert Ryan (no one ever was or will be, for that matter) yet he possesses a different sort of bite. There is undeniably a temper to his Dixon, one that simmers just underneath the surface. This is all the more impressive given that Andrews is also terrific at playing more level-headed, somewhat friendlier, and humanistic roles as well, such as in Elia Kazan’s Boomerang!. In Sidewalk, he projects a steeliness that might not unnerve just any crook, but the potential for an outburst is ever-present, making him all the more dangerous in that sense, for antagonists do not know exactly when he shall lash out. On the other hand, Tierney is magnificent even though she is predictably playing a part that does not ask much of her. Morgan is picking up the pieces of a failed marriage, oblivious to the fate of her late husband (Dixon covers up his fatalistic slip-up as long as possible in the hopes of pinning the blame on another slippery high-class crooner, Tommy Scalise, played by Gary Merrill). She evidently finds Dixon an interesting fellow, possibly an attractive one, yet claims she may want to demonstrate some solidarity for her former hubby if the charges against him stand. Their superbly acted back-and-forth exchanges hint at a love that could be were it not for certain expressed reservations on the part of Morgan and hidden feelings of guilt on the part of Dixon.

Preminger and screenwriter Ben Hecht get a lot of mileage out of the premise of a vicious cop having to cover up for a mess for which, due to his unstable past, he could easily be blamed. The initial shock of having killed Ken Paine quickly subsides in favour of an elaborate and increasingly stressful scheme to avoid detection from his partner and superior (Bert Freed and Karl Malden respectively, both in fine form). What is striking is how the filmmakers choose to have Dixon behave throughout his escapade. Beyond the fact that he incessantly claims that the infamous Scalise is to blame for Paine’s demise once the latter’s body is recovered from the river, there is the discomforting fact that Dixon is playing his part without much apparent concern for his wickedness, at least not at first. It is apparent that so long as he can somehow, somehow shake up a cocktail of evidence leading his peers to Scalise, all will be well, especially if it entails wooing the delightful Morgan. It is only in the latter stages, once Morgan’s father is believed to be the culprit, that a new reality sets itself in for Dixon, who faces a different sort of challenge towards his code of ethics. Even though the eventual revelation of Dixon’s father as a criminal who perished while trying to flee the authorities is somewhat clumsily handled, it does put the protagonist’s increasing sense of guilt into perspective. How much of his father’s ethos lives within him if he can try to outwit the police force for his own selfish good?

Preminger, much like in Laura, creates a delicious visual presentation style that refuses to call attention to itself even though seasoned viewers will recognize some of the brilliance on display. The director’s inclination is to have the camera turn or pan as much as it can in any given scene to communicate whatever information deemed necessary. This is exercised in favour of cutting from one camera to another whenever possible. That is not to argue that Sidewalk has fewer cuts than most other films, but paying attention to the cinematography and editing reveals that Preminger worships the tracking shot much more than chopping a scene in the editing room. It is a quietly effective technique given how said tracking shots are never elaborate or unashamedly fanciful. They simply help ease viewers into a given scene, using the camera’s lens of their eyes to the world of the movie. In a way, there is less artificiality about the final product, even though a director deliberately choosing to have a camera placed in a specific location on a set is itself an aspect to the artificiality of film. Restricting the cuts nevertheless means a viewer focuses on what they are looking at longer, the frame behaving much like a real person would when tilting their head or shifting their eyes whenever the object of attention moves within their field of vision.

Most would be inclined to compare Where the Sidewalk Ends to Laura, a natural predilection for movie buffs. It features the same director, same genre, same stars, similar awkwardness stemming from the romantic angle, and more. Each is different enough to stand on their own, which is what matters above all else. Where the Sidewalk Ends is an excellent piece of cinema exploring the mindset of a once-steadfast detective forced to reckon with suddenly conflicted emotions that will inevitably shape his career, his love life and his inner self for years to come. It serves as further proof of Dana Andrews’ and Gene Tierney’s capabilities as stars and Otto Preminger as one of the great storytellers of the era.