For every killer witty quip courtesy of talented writing, there’s a groan-inducing puddle of unfunny muck to contrast. Zombified bumbling humor (Black Panther’s “What are those?” meme reference lacking a single iota of inventiveness) manifests alongside laugh-out-loud pizzazz (Thor: Ragnarok’s bundles of charisma-infused gags) to create what we refer to as scripted comedy: a stupendous invention that misses as much as it hits. Certain screenwriters comprehend funniness in the same way that Theresa May comprehends how to effectively behave like a human, not letting on she’s actually a tyrannical space lizard from the moon. Just as said writers will continue to churn out insipid teenager High School narratives and The Big Bang Theory, Theresa May will one day reveal her true form, consuming Britain’s homeless and migrant population via her gaping lizard mouth, before fornicating with Donald Trump on live television. Amongst the aggressive bleeding of miscellaneous orifices and their wrinkly skin flapping about the place like slices of out-of-date ham, they will conceive the anti-christ and doom us all.

Pornographically peculiar political tangent aside, the point at hand is that certain comedy writers fail to deliver the goods due to lacking an understanding towards their subject of ridicule. Ignorant movie jokes only succeed if the audience shares in said ignorance. Spy Kids 3: Game Over portrays video games as a bizarre amalgamation of ridiculous challenges via grotesquely ugly computer imagery. Its creators evidently prioritized coughing up a scrap heap of a narrative as a vehicle to sell their tacky 3D glasses gimmickry, as opposed to creating an endearing family film that lovingly showcases video games via consistently informed representation of the art form. Of course, the third Spy Kids outing is one of many movies that haphazardly glues video games to its subject matter and explores the medium through mere assumptions and speculation as to how they truly operate, further cementing the argument that movies and video games don’t mesh. 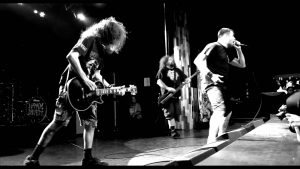 Napalm Death live. Many movies explore death metal with a loving understanding of its tropes, but ignorance will always lurk in the crags of popular culture.

Speaking of frequently misunderstood and often ridiculed subjects, perhaps there’re few better examples than dubstep, with Deadpool 2’s recent mishandling of it being the perfect example. Most people loathe dubstep with pugnacious passion, but I’d welcome it with an open embrace. Why? Because I’m one of the rare people that loves it!

From Rusko to Trolley Snatcha, and Doctor P to Zomboy, I’m a sincerely serious superfan. Propelling into mainstream popularity following the Skrillex boom of 2010-ish, songs including “Scary Monsters And Nice Sprites,” “First Of The Year (Equinox)”, and smash hit “Bangarang” sold society on savagely screechy ‘n’ wildly wonky sounds nestling atop a bed of pumped up sub-bass. Frequency modulation synthesis was all the rage, and the hipster-esque ex-emo Sonny Moore was the cool as hell dude to listen to. Unsurprisingly, dubstep’s lifespan in the public eye was limited, resulting in its re-submergence into the underground during the years after “Bangarang.” Those that once stuffed their iPods chock-full of the genre now scrambled to aggressively erase it, understanding that showing any semblance of appreciation for a non-currently trendy style of music is the social equivalent of proclaiming “Hitler was misunderstood,” before scooping out an orphan’s kneecaps with a spoon.

Dubstep: Once cool to listen to, now trendy to hate

So what’s the point? Where’s this going? Well, with Deadpool 2 being a kinda recent thing, and with instances of its humor linking to dubstep, let’s take a ganders at how specifically it tackles the divisive genre. Does it boast comprehensive knowledge of dubstep, smartly satirizing its musical properties via freshly unique means, or does it opt for the all too common cringe-inducing ‘Play “Bangarang” and cough up a couple of bumblingly benign quips’? 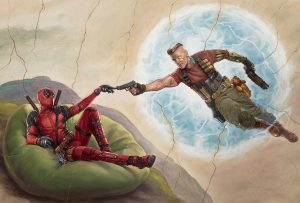 Deadpool 2: So what exactly is dubstep?

As Deadpool and Cable wail on one another, “Bangarang” rings out. The red-and-black clad protagonist spouts off as to why he loves dubstep, which would be a compliment if it wasn’t merely an uninspired gag for Deadpool 2 to flop on. Deadpool declaring “I love dubstep” is funny because loving dubstep is a joke, right? Who would actually love such a stupid style of music other than eccentric weirdos and social clowns like Wade Wilson? Dubstep, a genre that’s 140 to 150 beats-per-minute and boasting a half time drum groove, represented by “Bangarang,” a song of 110 beats-per-minute with a standard time drum groove — that’s right, the most popularly recognized dubstep song isn’t actually dubstep. (It’s Moombahcore, which is albeit inspired by modern dubstep sound design, but that’s irrelevant to the point at hand.)

So when Deadpool 2 twists up the banter dial and aligns its crosshairs with dubstep, churning out “Bangarang” as Deadpool and Cable trade remarks concerning the low-hanging fruit musical target feels akin to woefully uninspired spoofing. Perhaps the writers of a movie as monumentally humongous as Deadpool 2 could have performed even a slither of research into their subject of ridicule as opposed to diving in headfirst with a less than surface level knowledge of dubstep and the passionate fanbase surrounding it? Then again, why bother when 99.9% of your audience will share in your ignorance? 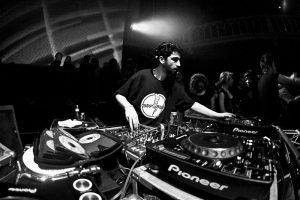 Many dubstep artists cite Doctor P as an influence on their sound. 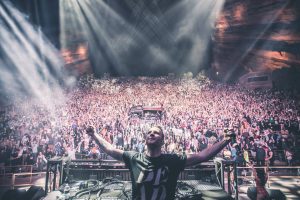 Thanks to artists such as Zomboy, dubstep’s not dead.

There’s nothing wrong with poking fun at musical genres, but it helps to know what you’re talking about. Why is This Is Spinal Tap such an acclaimed rockumentary? Because it fundamentally respects and understands its subject of satire, showing the trials and tribulations of touring mishaps, poor album reviews, and the subsequent rise in tension between bandmates. Why are Steel Panther such a successful parody of glam metal? Because they evidently adore and grasp said genre, indulging in the zany fashion and theatrics of it, whilst demonstrating legitimately competent musicianship to boot. David Brent: Life On The Road authentically portrays the hardships of a struggling touring musician, from empty venues to social isolation to technical mishaps. Metalocalypse flaunts an original soundtrack of death metal courtesy of creator Brendon Small, alongside a wealth of collaborations with esteemed musicians. Popstar: Never Stop Never Stopping confidently analyzes current aspects of the modern pop-stratosphere, hence its lampooning of them being top notch. 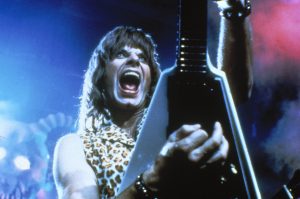 This Is Spinal Tap shows the highs and lows (mostly lows) of a dysfunctional rock band. 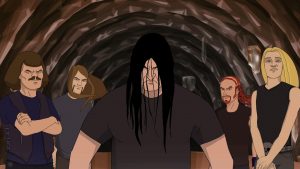 These aforementioned examples of stellar parody share a common characteristic: each one wholly understands the target of its humor, drumming up gags that are factually on point as a result. By contrast, time and time again dubstep has been curb stomped by lazy writers that hold only a wafer thin comprehension of its history and qualities. Key & Peele‘s example of dubstep is grossly produced noise exemplifying the most amateurish, outdated, and plain incorrect qualities of the genre, and too often is this people’s perception of dubstep. Just once I desire to hear a parody of dubstep that’s current, factually accurate, and professional sounding (not dipping into the ten-years-out-of-date wobble bass stylings of the aforementioned Key & Peele example). On that note, I’d argue that Key & Peele‘s iteration of dubstep isn’t music, since it bears no discernible qualities of effective songwriting, coming off rather as a cacophony of random noise over a garbled groove. Actual iterations of dubstep, flaunting dance-able drum patterns, memorable hooks, and smart structure, follow tried-and-tested conventions of songwriting, proving its legitimacy.

Back to Deadpool 2: the thought process of its writers likely played out as “What’s a hot bit o’ music to jab that teenagers will giggle at, whilst simultaneously being a tad bit stylishly niche?” Meanwhile, as audiences cackle at the bad-ness of dubstep, Deadpool 2‘s “Welcome To The Party,” flaunting vocals from child star misogynist himself, Lil Pump, is poured into their gooey ear holes. If a seventeen year-old septic bin bag of a human being rapping “Welcome to the trap, got my Grandma selling crack” is what’s valued as knockout music today, then perhaps I’ll ingest the plethora of drugs Lil Pump rambles about all too frequently and pray to every deity imaginable that I overdose violently.

My own subjective taste in music aside, Deadpool 2 mocking one genre whilst holding another on a pedestal tells the audience “This is the music you should love, and this is the music you should laugh at.” Fueling social bias towards specific genres, this type of comedy tells the audience what to think, as opposed to letting them draw their own conclusions. An example of wonderful writing that encourages audiences to consider multiple perspectives and draw their own conclusions on a divisive subject is The Simpsons’ 1997 episode “The Cartridge Family,” which showcases both sides to the gun ownership argument, a controversial topic still hotly debated over twenty years later.

Maybe death is the sole viable escape to mindlessly braindead dubstep parodies and arrogantly grating rap that flies in the face of the politically charged passion once displayed by N.W.A and Rage Against The Machine, tour de forces that pioneered a medium of skilful wordplay and eloquent lyrical flow. Perhaps one day societies’ attitude regarding dubstep will soften, opening the door to thoughtful humor on the topic. Alternatively, perhaps we’ll die painfully as the gargantuan glowing Sun engulfs our pathetically pitiful Earth. As our eyeballs melt into a pale jelly in their sockets by the searing temperature, we’ll tweet that James Corden’s final carpool karaoke, featuring Death himself as a guest, is “breaking the internet,” whilst remarking that Kylie Jenner’s brand-spanking new range of foreskin cream is “super lit.” Facing our agonizing demise, we’ll expend the dregs of our energy striving to be up to date, irrespective of the horrendous circumstances. Those who are partial to dubstep will spend the sun apocalypse socially isolated, neglected by the popular culture that once loved them. The Chainsmokers will unveil their latest single, a cockily flavourless mickey taking of dubstep, jam-packed with the comedic charisma of a limbless child attempting to flee a tsunami by climbing a step ladder.

With any luck, comedy writers will one day abandon their ignorance towards specific subjects of ridicule, and instead apply a dosage of intelligence to their satire. Everything can — and should — be mocked, but only if said mocking isn’t clutching at straws, picking the lowest hanging fruit via a wishy-washy knowledge of the subject at hand. Perhaps Deadpool 3 will up its satire standard, educating its audiences about its niche topics of ridicule via factually accurate jesting, whilst simultaneously drumming up a hearty laugh that isn’t exploitative of the audience’s ignorance.

Popular dubstep artist FuntCase also had something to say.

Alternatively, perhaps satire will die miserably. The sun doomsday will commence, and humankind will be scorched to a charred crisp still believing that “Bangarang” is a dubstep song.

NYAFF 2018: ‘Respeto’ Battles Against a World of Violence