People say you shouldn’t bring your personal problems into work with you. Well, I’ve just sat and watched my beloved Tottenham Hotspur lose the North London Derby, so I feel like bringing all the pent-up rage inside me into this article – you know, just to keep it consistent with every other week. All I need is a once-revered developer unceremoniously fucking up a beloved gaming property to take my anger out on. Oh, wait…

That Just Ain’t My Bag, Bethesda

Last week I passed on the news that the game sold about as well as cream cakes at a bulimia convention, reviewed about as well as Mein Kampf (outside of 1940s Germany) and was more broken than…well, I was going to say Fallout 4, but considering a bunch of the broken code was directly copied and pasted from there straight into 76 (meaning the games have the exact same bug in them, because Bethesda don’t fix anything), let’s just say it’s as broken as Fallout 4. This week, you might as well renew your tickets for the Bethesda hate train, because things just keep going from bad to worse.

I mean, this isn’t funny, but it’s almost so ridiculous and despicable that it’s funny. You get me?

Anyone rightly pissed off that they bought a broken, buggy, boring video game for $60 and saw it reduced to $40 almost immediately was outdone this week, as it was revealed that the contents of the $200 Power Armour Edition of the game were being falsely advertised as good when they were, in fact, shite. A post on Reddit compared the picture of the advertised canvas bag to the veritable garbage bag received instead.

Worse still, the customer service rep from the Bethesda Gear Helpdesk – when asked why a drastically worse product than advertised was received and what was going to be done about it – responded by saying that “the bag shown in the prototype was too expensive to make,” and that Bethesda “aren’t planning to do anything about this.” If you think you’re hearing a ripping sound, don’t worry – it’s just that bellend’s contract being torn up. 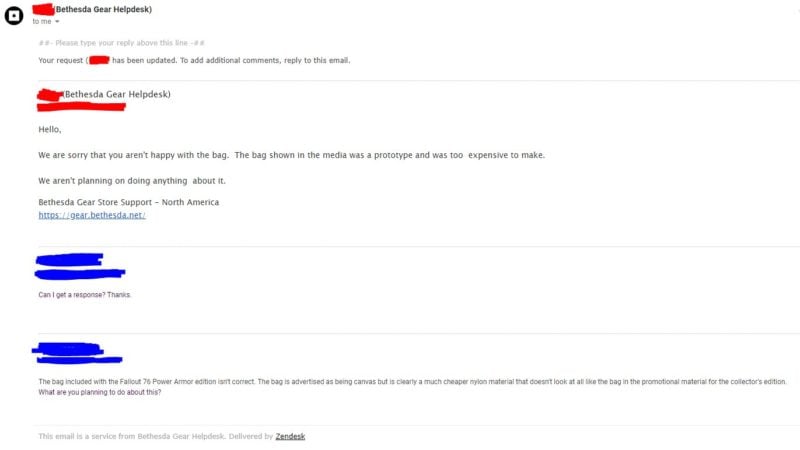 Ladies and gentlemen, I present to you the next big meme: we aren’t planning to do anything about this.

Clearly this response is disgraceful and it enraged everyone in the world, so Bethesda needed to distance themselves from it and act quickly with an impressive gesture of goodwill to satiate, let’s be honest, the biggest fans who were willing to spend the most amount of money possible on arguably the developer’s worst ever game. I’ve kept you in suspense long enough, it’s time to reveal what that incredible gesture of goodwill was. Tie some string around the top of your socks, because they’re about to be blown off…

We understand and respect that there is disappointment with the bag in the Power Armor Edition. We are sorry. Please contact Bethesda Support to provide proof of your CE purchase. They will assist in granting your account 500 Atoms.

Oh wait, that’s right. 500 Atoms is a fucking piss-take. Of course! To those poor souls who are left saddled with a crappy bin bag as a result of an expensive lie from Bethesda, their recompense is $5 worth of in-game money. Which, of course, costs Bethesda absolutely nothing to give out. I’d find it funny that the in-game canvas bag that the real one was supposed to be modelled on costs 700 Atoms to buy, if it wasn’t so bloody tragic. Ok, maybe I do find it a little bit funny. What does 500 Atoms get you then? Apparently, a door and some flowers. Score one for the good guys!

Collective jaws dropped this week, as Nintendo actually did something smart with regards to the internet. Granted, it’s come after years of their bullshit, but we can finally rejoice at the death of the Nintendo Creators Program. Hooray; Nintendo hates its own fans a little bit less!

The scam of the century is thankfully to be taken out the back and shot, and its grave can be danced on by anyone wanting to make a living out of discussing, analysing, playing and celebrating Nintendo games on YouTube. I don’t want to give Nintendo any credit whatsoever, because killing something so egregious doesn’t excuse its previous existence, but it’s a pretty smart – or, at least, obvious – move to get rid of such a restrictive policy at a time when the world and his dog is going to want to stream the Switch’s biggest game of the year – Super Smash Bros. Ultimate.

For a brief historical recap (thanks to Eurogamer), here’s a chronological list detailing the pertinent points of the shitshow that was the NCP: 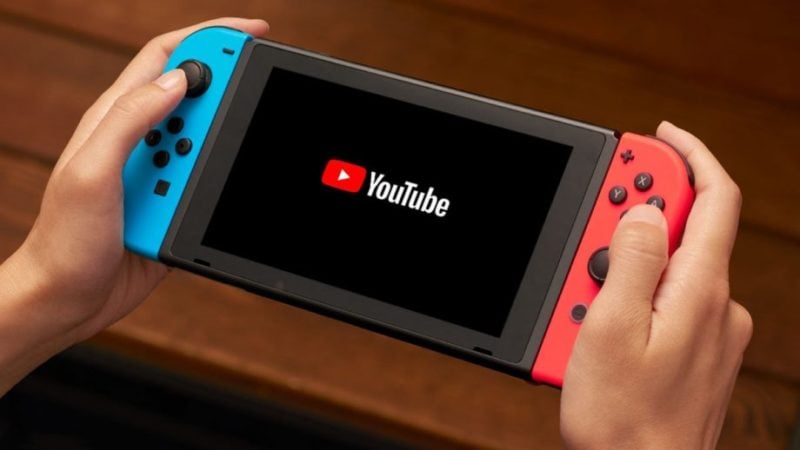 The closure of the NPC comes right after the YouTube app appeared on Switch. Coincidence? Doubtful.

Nintendo’s official statement on the NCP’s closure is that it aims “to make it easier for content creators to make and monetize videos that contain Nintendo game content,” and that they “will no longer ask creators to submit their videos to the NCP.” The NCP is set to close at the end of this month, and is hopefully a sign of Nintendo getting with the times and accepting that the free marketing of people playing your games on YouTube is better than them all calling you out for being greedy bastards and/or refusing to cover your games at all.

Switch Gives a Lot of Thanks

From one bit of positive news for Nintendo fans and YouTubers to a hugely positive bit of news for Nintendo themselves. The Thanksgiving weekend and all that Black Friday hubbub did them an absolute solid, with the console smashing records left and right.

According to their official statement (via Gamespot), the Switch “became the best-selling Nintendo console in US history,” for that specific holiday period and also had its “best-selling week ever in the US.” They noted that it was “the best seller for [all] video games during the full Black Friday to Cyber Monday time period.” 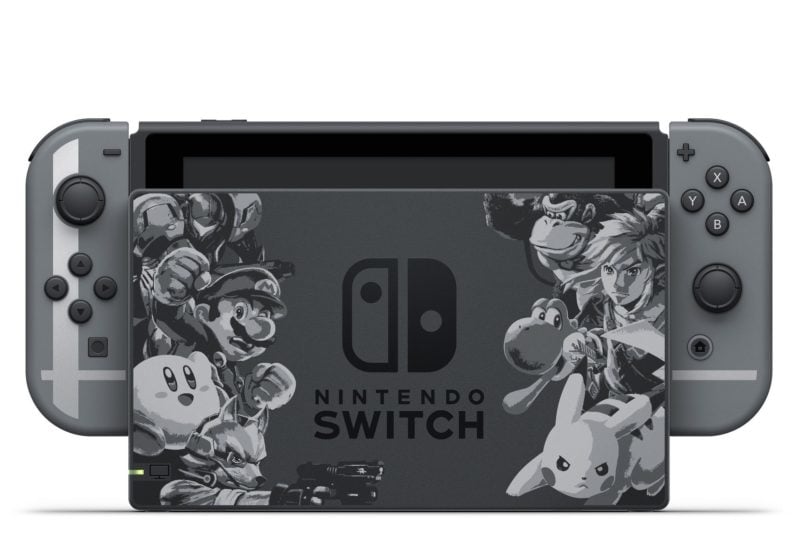 Black Friday came a little too early for this bad boy, otherwise I might’ve been tempted to switch Switches.

Obviously, this kind of thing is to be expected during a holiday period that also features heavy discounts from all around the retail world, but considering the dry year the console has had in terms of truly must-have releases, it’s an impressive feat. It ensures the Switch picks up some much-needed steam in between the releases of Pokémon Let’s Go and Super Smash Bros. Ultimate. Clever boys, eh?

Has there ever been a good Superman video game? In fact, name me one Superman video game that isn’t Superman 64 and you’re a…well, not better man than me, but you know more about terrible video games than I do anyway. For months now, it seemed that ol’ Kal-El would finally get some redemption in the video games medium, as Batman-saviours Rocksteady Games were strongly rumoured to be working on a title for the Caped Crusader.

Turns out they weren’t. Game Director and co-founder of Rocksteady Games Sefton Hill threw kryptonite all over those rumours with the below tweet.

Looking forward to #TheGameAwards this year! We’re still hard at work in our development bunker so don’t expect an announcement from @Rocksteadygames. When it’s ready to show, you’ll be the first to know. Spoiler: it’s not Superman ?

The consensus – or the straw-clutching refusal to give up hope – of DC fans is that, while Rocksteady’s new game won’t be a Superman title, it will still incorporate Clark Kent without the glasses as a full Justice League game. While that would still be undeniably cool, the video games medium is one that is all too ready to remind its audience that if you want something enough, you’ll probably be strung along only to eventually have your hopes dashed. Expect that Aquaman movie tie-in to be announced on Friday 7th December then.

Give ‘Em the Boot Boxes

A few weeks ago, a BBC report revealed that the UK government’s Gambling Commission had found in a survey that “the number of children classed as having a gambling problem has quadrupled…in the last two years.” That survey also “raised concerns that close to a million young people had been exposed to gambling through loot boxes in video games or on smartphone apps.”

What could be seen as something of a throwaway add-on to the survey may have done more than first thought, as now the US and Australian governments are paying attention too. This week, US Senator Maggie Hassan implored Federal Trade Commission Chairman Joe Simmons to investigate loot boxes. She believes that “given the seriousness of this issue…it is time for the FTC to investigate these mechanisms to ensure children are being adequately protected.” Good on her!

Loot boxes are a blight on modern gaming, and represent nothing but exploitation and corporate greed – we all know that. It’s frankly baffling how long the nefarious practice has been allowed to go on already, but of course, when any industry regulates itself, it doesn’t always do that much regulating. The ESRB clearly couldn’t give two tugs of a tiny tortoise todger if games rated 3+ have gambling mechanics in them, so it’s up to governments to think of the children. At long last, they might be about to do it. Even if they don’t do it for the children, loot boxes are terrible and we all hate them, so let’s just hope there are some disgruntled gamers in the FTC.

Right, I’m off to sulk about soccer for a bit longer (whilst calling it football). I hope all your sports teams win/won this weekend (unless that team is Arsenal or the Arizona Cardinals) and I’ll see you in seven.