This Week in Gaming News: I’m Not Talking About Bowsette

We’re well underway with the holiday gaming schedule, as this week saw the release of several big games – most notably Forza Horizon 4 and Mega Man 11. I’ve got them both, like them both, and highly recommend them both. With Black Ops 4, Soul Calibur 6 and Red Dead Redemption 2 still to come this month, you better think about getting your backlog dealt with (or just ignore it). With that in mind, I think we’ll start with some news about a certain rootin’ tootin’ adventure that we’re all rather excited about.

The Waiting is the Hardest Part

Rockstar, those teasing minxes, released the second gameplay trailer for Red Dead Redemption 2 this week and it reaffirms just how special this game promises to be. We all knew that Rockstar’s first ‘proper’ release in 5 years was going to be a humdinger, but RDR2 looks gorgeous, revolutionary, exhilarating, engaging and ridiculously fun.

True to form, the new trailer is not skimping on the details. The Giant Bombcast also featured some revelations from a hands-on session and I can list some of the more pertinent features I’ve gleaned for you lovely folks right now:

Just on general observation, the game looks brutally violent, and the sound design is visceral and noisy. This is going to be equal parts cinematic and gritty, and it’s tonally perfect. What’s more, everything looks so dynamic and fluid, and I’m hoping that these moments are repeated as little as possible – I don’t want to see the sausage being made after several hours. Provided the game is packed full of new and inventive ways to engage the player, labelling this as potentially the greatest game of this generation isn’t sticking my neck out all that much.

Nintendo Planning to Switch to a New Design

An article in the Wall Street Journal has reported that “suppliers and others with direct knowledge of the plan,” have unveiled Nintendo’s intention to release a new Switch model in the latter half of 2019. I think we all saw this coming, didn’t we? It wouldn’t be a piece of Nintendo hardware if early adopters weren’t shafted by the relatively quick release of the version we should’ve had all along.

The move is said to be in part to improve the quality of the machine, but also to boost slowing sales. I guess that’s what happens when you don’t release any first party games worth owning until right at the end of the year. The Big N are apparently weighing up what to include in the new model in terms of hardware and software, and the most likely improvements would be the battery life and quality of screen. The report suggests that the screen will be updated with LCD technologies that mirror those of current smartphone hardware, and that “updating the display with these technologies would make it brighter, thinner and more energy-efficient.” 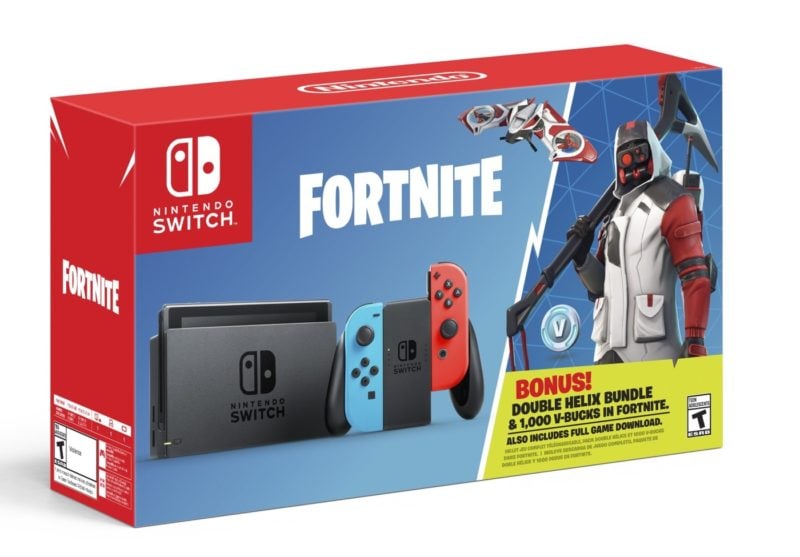 This is the next Switch to be released, but it’s obviously not the updated version. It’s not even a new color!

There’s no mention of upgrades to firmware or additional features in any newer models, so those with pitchforks at the ready expecting a voice chat-enabled, 4G-capable device complete with streaming service apps are likely to be reassured that they’re not missing out. Or disappointed that they still are missing out – whatever’s easier to complain about. The sources aren’t named by the WSJ and a Nintendo spokesperson declined to comment, so this could all be bullshit, but if the Switch went through its entire lifecycle without some form of ‘version 2’ hardware release, most of us would have a belly full of hats.

Unsurprisingly, the bad news coming out of Telltale’s closure rumbled on this week, as the previously-stated “skeleton staff” of 25 people kept on to finish up some projects lasted less than a week before they were all booted out the door (with no severance pay, remember) as well. Was there ever really any doubt?

Rachel Noel, a former narrative designer has been breaking the news on Twitter this week, with her first tweet stating:

Heeeeyyyy remember how there was going to be a skeleton crew staying on for a while and I was part of it? Nah, jk, we all just got laid off, too.

She later clarified that not everyone remaining at Telltale had been laid off, but that not many were left and her entire team was done. She had no information on what the remaining few staff were working on, but the understanding was that it is very unlikely to be The Walking Dead’s final season. However, just yesterday Skybound Games – the video game arm of Walking Dead creator Robert Kirkman’s Skybound Entertainment – announced that they had reached a deal with Telltale to complete the final season themselves.

The news was broken by Kirkman himself to a panel at New York Comic Con with the following quote via Variety:

“We’ve successfully negotiated with Telltale Games for our company Skybound to come in and see Season 4 of the Telltale game to completion. We can’t lose Andrew Lincoln and Clementine in the same year.”

We’re SO happy to announce that we’ve reached a deal with @telltalegames that will allow Skybound to continue #TheWalkingDead: The Final Season! Let’s wrap up Clem’s story right! More details to come soon. pic.twitter.com/ShyREw65iq

This is excellent news for everyone but the poor schmucks who’ve been laid off by Telltale, as those who have purchased the season pass for the game will get what they paid for. The Variety report suggests it will be in-house developers at Skybound who will be working alongside some of the Telltale stragglers to finish it off, and hopefully this won’t mean a drop-off in the already-low quality Telltale had been putting out recently in terms of the game’s performance. At this stage, though, it really is (unlike Mighty Number 9) better than nothing.

Something Wizardy This Way Comes

You probably won’t be able to find it anymore, but there was leaked footage of a reported open-world Harry Potter game doing the rounds online this week. Personally, I couldn’t give less of a shit about it, but it’s my understanding that the franchise is sort of a big deal, so I’ll try and break down what’s known about it so far. See how good I am to you lot? 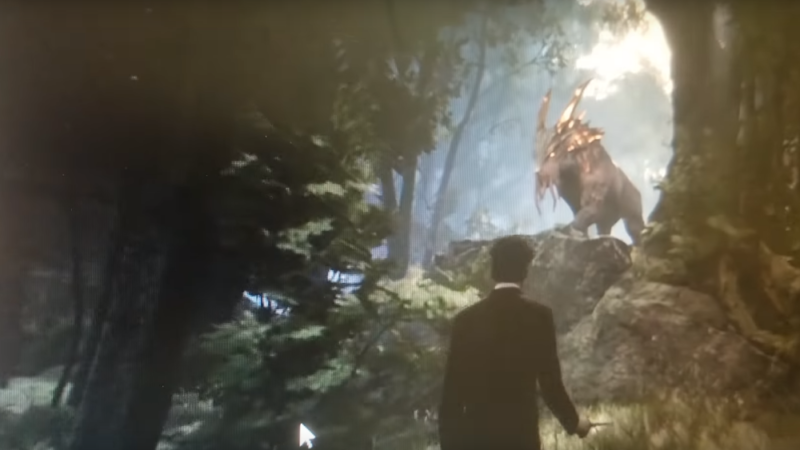 Here’s a…wizard of some description approaching a…thing in the distance.

Reddit user VapeThisBro was the man with the leaky fingers who dropped the video for the world to squint at, but it’s since been removed from YouTube by Warner Bros. Interactive. Now, they wouldn’t remove something that was fake, would they? Anyway, he claimed that he was shown the video as part of some market research. According to a Gamespot, it showed off “character creation, spell casting, and open-world environments set in and around familiar Harry Potter locations,” while Eurogamer added that it had “sweeping vistas of Hogwarts…third-person combat mechanics and large set pieces.” 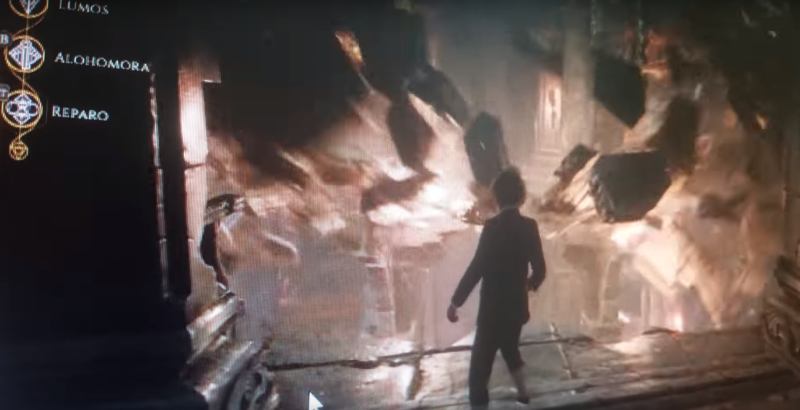 I think there’s some spells in the corner and those other things are definitely rocks. Or they might be boulders.

Eurogamer added that “sources with knowledge of the project” (which itself has become the go-to phrase for this week’s news) have confirmed to them that the video is legit, the game is real and that it’s likely in development at Warner Bros-owned Avalanche Studios. As I already mentioned, I’m no Potter fan, but this seems like the perfect type of game for those that are. A proper RPG with a new story, created characters, and the choice to be good or evil – all of this sounds too good to be true, but luckily it isn’t…too good. Because it’s true. Unfortunately, I can’t show you the video, so these shitty screen grabs from Variety will have to do.

What a week for ol’ Mega Man, eh? A brand-new game, another killer article by me on Mega Man 3, and now a live-action movie. You might say he’s on a Roll. Actually, that’s kind of gross.

“The feature film, tentatively titled MEGA MAN, will be written and directed by Henry Joost and Ariel Schulman, and is scheduled to be distributed by 20th Century Fox. Chernin Entertainment, responsible for the Planet of the Apes series, will be producing it with Masi Oka, of Heroes fame… Capcom aims to appeal to a diverse audience… with an adaptation that maintains the world of the Mega Man games, while incorporating the grand production and entertainment value that Hollywood movies are known for.”

It does seem like video game adaptations are announced and forgotten all the time, and those that aren’t forgotten are usually a pile of arse, but that never stops initial hopes from being…well, hopeful. I’m not entirely sure that Mega Man has a universe rich and exciting enough to fill a 90-minute movie of serious action, but if it tries to play to a Scott Pilgrim vibe, then it may be enjoyable enough. 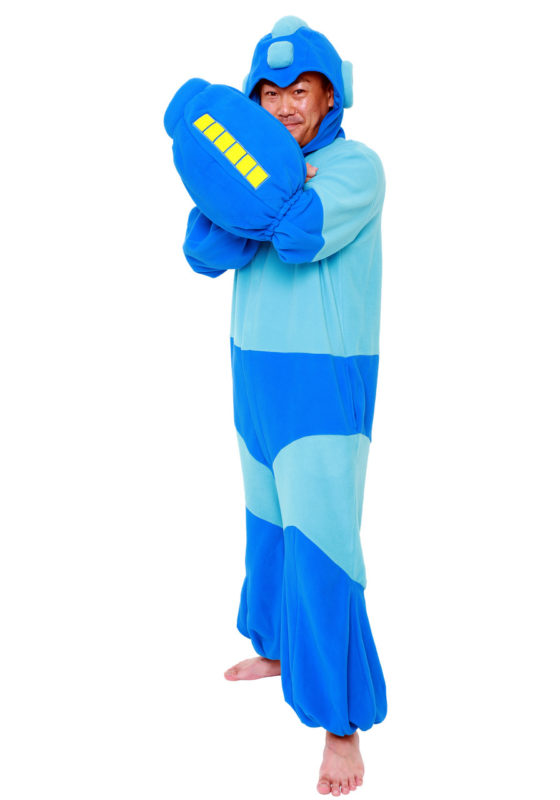 Capcom is going pretty hardcore on the movie front at the moment, with the Monster Hunter movie beginning production a couple days ago. I think we’re all better off expecting some silly fun from these projects in place of life-affirming masterpieces, but kudos to Capcom for giving it a go, and fingers crossed that either of the films is better than all those terrible Resident Evil ones.

That’s your lot this week, kiddos. Go play some Forza Horizon 4 or Mega Man 11, or read their reviews by clicking on either name, and I’ll see you either on this week’s Not Red E Podcast, or in seven for more of the news that counts (to me).

Resident Evil Village Gets Not One, But Two...

Blizzard’s “From the Vault” Collection Is Celebrating The...

The Use of Catholic Themes in ‘Outlast 2’