Well, would you look at that? Last week I was away from the gaming sphere as I took in the Edinburgh Festival and didn’t have enough time to collate the week’s news. Turns out it wasn’t that much of a loss, as there was little of note to discuss. Then, just like magic, when the big dog’s back in town, the world of gaming news pulls its finger out and delivers easily the most blockbuster week of information and controversy since I started writing this column. You best put seatbelts on your eyes, folks, because I’m about to take them for a hell of a ride.

Despite the glorious abundance of positive video game news I have to talk about this week, there really is nowhere else to start than with the sensational story of Filip Miucin. Readers familiar with this column are not going to win any prizes for guessing what the tone of this section is going to be, as I am, needless to say, utterly disgusted with this fucking piece of work.

To briefly fill you all in, Filip Miucin is the now-former Nintendo Editor of IGN, who hit the news thanks to an absolutely astonishing high school-level act of plagiarism. Put bluntly, he stole the Dead Cells review of a small YouTube channel called Boomstick Gaming, changed the wording ever so slightly, and uploaded it to the biggest gaming website in the world expecting not to get caught.

Naturally, because news and scandal in games media travels faster than a blue hedgehog, he got caught in no time at all. IGN first of all took down ‘his’ review pending an investigation, and subsequently fired him the next day. The website’s official statement cited “substantial similarities between a review posted weeks earlier and our review that could not be justified.”

In the aftermath of his firing, Miucin took his shit-eating grin to YouTube to try and claim that his blatant plagiarism was “not at all intentional.” Deciding this wasn’t enough shithousery for one video, he also had the gall to call out Kotaku news editor Jason Schreier for trying to “get as many clicks off [his] name right now as possible,” in response to the Kotaku man calling him out for also plagiarising a FIFA 18 review from Nintendo Life written by the talented Scotsman Chris Scullion. Scullion responded to this with a video that, once again, contained near-irrefutable evidence implicating Miucin as a lying work thief.

For some reason, Miucin felt like dying on his sword, and also implored Kotaku to “keep looking… and please let me know if you find anything.” Needless to say, Kotaku did keep looking and they did find more. Miucin had also written a review of Metroid: Samus Returns that had a striking similarity to the one written by Engadget. Ask and you shall receive, eh?

It’s easy to deride and condemn Filip Miucin (fun, too), but the bottom line, as far as I’m concerned, is this: as a person who has harboured the dream of making a living from writing about games for well over ten years, I have tirelessly worked at my craft and have barely ever made more than a couple of quid. You may not like my work, but despite it serving as little more than a hobby for over a decade, I have always tried to maintain my integrity and write to the best of my ability. Not once would plagiarism even cross my mind, and I’m in a position where taking the easy way out would be far more arbitrary than if I worked for IGN.

Filip Miucin is a man who had landed a job thousands of people can only dream about, and he has conducted himself with zero integrity, zero humility, zero professionalism, and now with zero accountability. Luckily his name will forever be mud in the games industry and he’ll never work for another site again, but his brazen excuse-making and bravado in the wake of his crime is perhaps the most despicable facet of the whole episode. He has to live with killing his own career and stealing from honest journalists for his own gain, and one can only hope he eventually does so with a little more remorse than he’s currently displaying.

With the controversy out of the way, we can focus on the more exciting of this week’s gaming news. Rockstar released a brilliantly informative and lengthy gameplay trailer for Red Dead Redemption 2 and, my word, the game looks outstanding. The video’s YouTube description boasts that everything in it was “captured entirely from in-game footage,” and, as well as displaying just how visually astounding the game is, gave us an in-depth look at the type of activities available to protagonist Arthur Morgan once we take control of him on October 26th.

Showcased in this, the first part of a larger reveal, were: numerous vistas and landscapes, fist-fighting, gunplay – including the return of the Deadeye system, settlements, dialogue options that can escalate or diffuse violent situations, a world that evolves based on player choices (I’m planning to be an absolute scoundrel in my playthrough), horse riding, and hunting the game world’s vibrant ecosystem. It’s a lot to chew on, and it’s probably better to just watch the video yourself.

I absolutely cannot wait to play Red Dead Redemption 2, and it’s still amazing to me that it marks Rockstar’s first real foray into the current generation of hardware, in terms of an original release anyway. You can really see the developer’s talent exploding onto 4k and the gameplay looks brilliantly refined for a complete experience. If you want to read more Goomba Stomp-sanctioned opinion on RDR2, hit up Billy Givens’ reaction piece here.

I’m going to be straight with y’all; I was incredibly sceptical about the point of this week’s Smash Bros. Direct. In fact, to give you a peek behind the Goomba Stomp curtain, here’s what I posted on our Workplace after the Nintendo Direct was first announced:

“It’s only about Smash anyway. How much detail can you go into on this game? Surely we all know if we like/want it by now, especially after E3.”

Well, how wrong was I, huh? This week’s Smash Direct absolutely obliterated the weaksauce E3 presentation with a tour de force of pacing, reveals and useful information. It gave me a sense of excitement I thought was impossible for a game that is such a no-brainer insta-buy, that I’d get it even if it said “Alex is a prick” on the back cover.

Where to even start with this one? Simon and Richter Belmont character reveals? 103 stages? An 800-song soundtrack? New items and modes? The mystery mode not yet revealed? Dark Samus? King K. Rool?! My word, this was fantastic. It’s difficult to come out of watching a video with those new characters and not cite them as the clear and obvious highlight, especially when all their movesets are so on-point and they are both iconic and community-desired in equal measure.

At this stage, Masahiro Sakurai is one of gaming’s biggest legends, and his team continue to pour every ounce of their energy and Nintendo knowledge into each subsequent title, further surprising me with each iteration in ways I simply couldn’t expect. Hats off, lads. Hats off.

Oof. I said to a pal of mine – after the news two weeks ago about Nintendo suing a couple of ROM sites – that at least it wasn’t our beloved EmuParadise that was under the spotlight. Turns out those running the site don’t even need the spotlight on them to force their hand, as Eurogamer reports that EmuParadise is to effectively shut itself down out of fear of legal action from the Big N and other publishers.

The site is to keep its emulators available, but the ROMs of games – of which it used to house basically everything ever – are gone. Yes, emulation is illegal if you don’t own the games, and it’s even more illegal to distribute them for free to the world. You could obviously take the stance of “well, fuck those publishers because these games are decades old,” and that’s not an entirely ludicrous opinion. The bigger issue, of course, is that the gaming industry is relatively dreadful at preserving its own historic library on a platform that makes it available for the public to access. 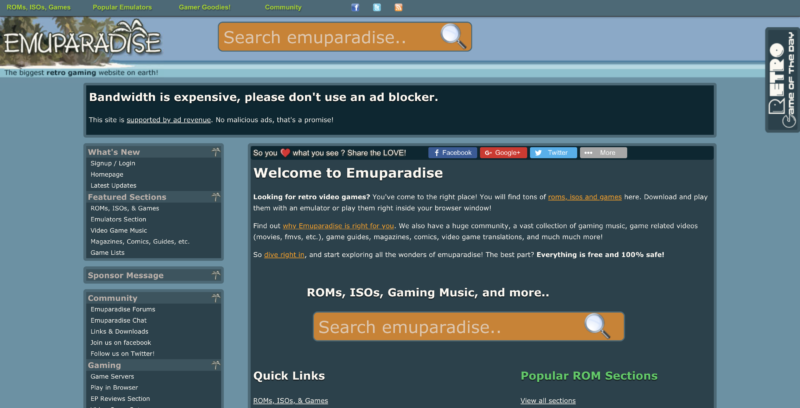 To be in 2018 without every games publisher hosting its own streaming, subscription-based service (and attacking ROM sites instead) is a very sorry state of affairs. If I can legally watch movies from the 1920s on Netflix, then why can’t I legally play 80% of the SNES library from the 1990s without paying hundreds of pounds to eBay sellers, hooking up 20 consoles at once, and suffering latency and image stretching on modern HD TVs?

It’s unlikely this issue has the answer we want in store any time soon, so make sure you back up all those law-abiding ROMs you downloaded, because you might have a struggle on your hands if you ever want to get hold of them again. Unless these ROM sites just pop up under a different name in the future. They’ll probably do that, actually…

‘Fallout 76’ Had An ‘Asshole Session’ For Your Benefit

Todd Howard took to a Q&A session at QuakeCon this week to allay fears that potential players may have about shitheel trolls ruining their experience in online-only Fallout 76 later this year. Fear not, because thanks to the assholes at Bethesda, the developer will be implementing a number of features to the game to keep us all safe(er).

“Now there’re no griefers left, I can finally start working on that novel”

As per PCGamesN, there are four key features to Fallout 76 that will help players avoid and/or deal with griefers:

I’m still unsure about Fallout 76, and I’m a big fan of the FPS-era of the series, but this has definitely given me hope that Bethesda aren’t just experimenting on a whim for larks, and they’re putting a lot of thought into making the game as appealing and inclusive as possible.

Well, that’s the end of an exhausting week of video game news. Enjoy the next seven days and I’ll be back with you once again.

This Week in Gaming News: The REAL Gamescom 2018 Awards

Everything you Need to Know about the Latest ‘Super Smash Bros. Ultimate’ Direct