Welcome, friends, to another week of happenings in the video game world. This week in gaming news has involved a lot of talking, speculating and rumor-mongering, but that’s fine. If there’s one thing that separates this article from the rest, it’s that I call a spade a spade, a rumor a rumor, and a hamster in a spherical mech a stupid idea for an Overwatch hero.

Well, well, well. It seems that PUBG Corp. have realised that sour grapes does not maketh a very viable lawsuit. At the time of writing, it’s not entirely clear why the trial of Jealous Crybabies vs Better and More Popular Game has been withdrawn, or whether any type of settlement has been reached, but the black and white of it is that PUBG Corp. has dropped its lawsuit against Epic Games and Fortnite.

For a quick refresh, the lawsuit revolved around PUBG Corp. claiming that Epic Games ripped off their formula for Player Unknown’s Battlegrounds and used it for the game Fortnite. If you want that summary in a more cynical sentence; PUBG Corp. tried to claim that their Unity Engine asset-filled bugfest of a battle royale game (a genre they did not invent) that runs on Epic Games’ Unreal Engine was ripped off by Epic Games when Epic made a unique-looking battle royale game that has bespoke mechanics and more robust gameplay, and is more popular than PUBG Corp’s own game.

For any neutral, it was incredibly obvious to see that Fortnite blatantly ripped off PUBG’s building and crafting, shopping carts, pinatas, jump pads, Jon Wick skins and Thanos event. For the smarter people among us, it was pretty obvious to see that the things I just listed were actually exclusive to Fortnite and went a long way to skyrocketing the popularity of the game ahead of the generic-looking and stale PUBG. Jim Sterling pointed out in his video that Epic Games apparently worked with PUBG Corp. while the game was being built on the former’s game engine, and that the latter was claiming that inside knowledge was used to steal PUBG’s ideas.

This could easily be true, but merely noticing an idea and reinventing it in a drastically better and more unique game within the same genre has absolutely no precedent for a viable lawsuit. The mere concept of video game genres wouldn’t exist if developers never took the ideas of others and adapted, improved and twisted them for their own creations. How the fuck do you think music evolves?

OBJECTION! And you didn’t invent frying pans as weapons either!

PUBG Corp. and developer Bluehole went about their boohoo-ing and Epic Games carried on adapting and improving the biggest game in the world because, you know, they’re a real publisher with decades of experience. Both games, I can confirm, are still popular and making tons of money, so perhaps in the end PUBG Corp. just decided to go back to counting their money and stop being jealous pricks. For now, anyway.

I effing love the Nintendo GameCube. It’s a beautiful little console that looks like a lunchbox, uses adorable little discs, and has the greatest controller ever made. It sold like shit. Maybe its poor, Wii-inspiring, commercial performance is the reason why Nintendo has basically shunned the console and every game that was ever on it – but it remains a beloved machine full of truly excellent games that a vast number of people are desperate to see ported to… well, anything.

Fear not (maybe) because, as per a report by website Japanese Nintendo, this week Nintendo “filed three new GameCube trademarks in Japan for video game purposes including video game program and video game machine.” The website featured the trademark application in full and also translated that it was specifically not for general merchandising purposes. We already know that Ninty will soon be releasing yet more officially-licensed GameCube controllers for the Nintendo Switch, but let’s all keep our collective fingers crossed that these trademarks are to be used to bring some beloved titles to Nintendo’s current console. 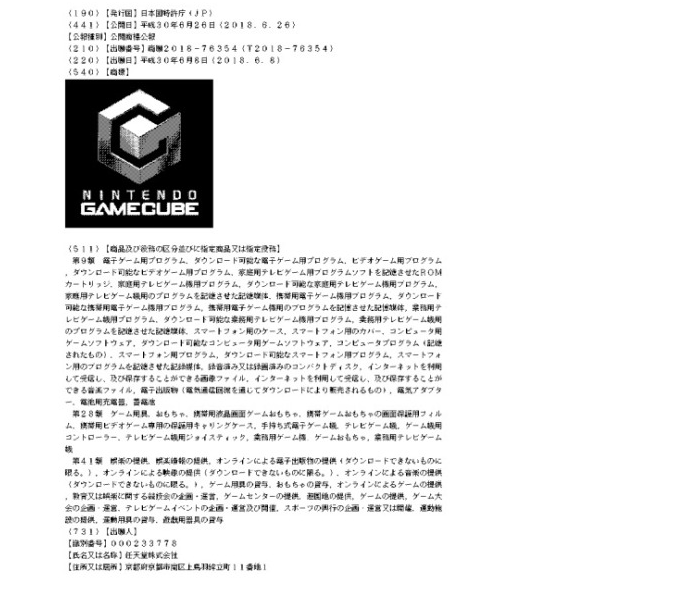 A trademark document is really not very exciting. But I’m still making you look at it. Oooooh, GameCube logo!

An HD port of Super Mario Sunshine has long been rumored to be on the horizon – as far back as the Wii U days – but there are several titles that could find a very comfortable new home on Switch. With Nintendo seemingly indifferent about making a new F-Zero title, who wouldn’t want a port of F-Zero GX? How about a version of Donkey Konga that can actually be played on an HD TV (try your old version on a new TV and feel the latency pain)? Zelda Four Swords Adventures playable with online capabilities instead of the requirement of knowing three people who want to come to your house and all bring their GBAs and link cables? Just ruddy well do it, Nintendo!

Nintendo Switch May Be Getting its Own ‘Monster Hunter’ Exclusive

Weeks ago I had a little fap over the announcement that Monster Hunter Generations Ultimate was coming to Nintendo Switch in the west on August 28th, and if I wasn’t already foaming at the mouth over that, Capcom has let slip in a recent Q&A that the console may well get another, exclusive, Monster Hunter title.

According to Siliconera, the Japanese publisher hinted at the new game as it responded to a question at its 39th shareholders meeting regarding the possibility of Monster Hunter World appearing on Nintendo’s latest console. While the answer shut down any chance of that happening, stating that it’s simply not possible to port the PS4/Xbox One title to Nintendo’s less-powerful console, the disappointment was satiated with the potential of a totally new game post-Generations Ultimate. 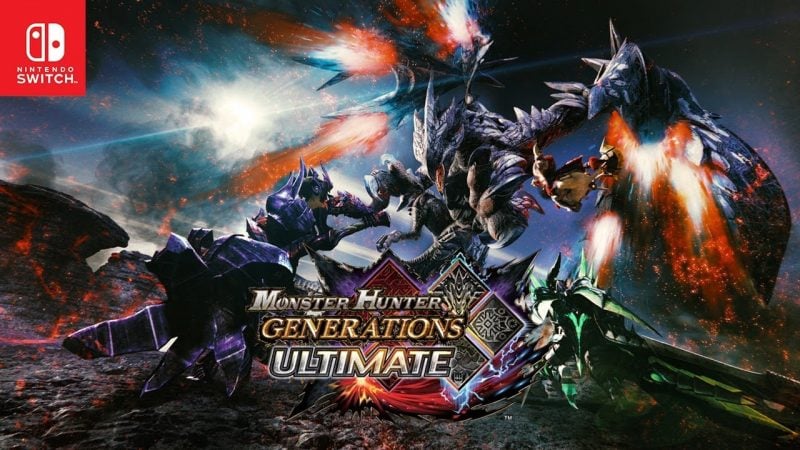 This would be a really nice precedent to see developers start adhering to. If you can’t get your AAA games on the Switch with parity to versions made for competing consoles and PC, then at least let the 18-odd million user base have their own sweet little something. Perhaps Generations Ultimate is the litmus test for whether this exclusive follow up will see the light of day, so Switch owners better make sure they act with their wallets if they want to see continued Monster Hunter on Switch.

Ever wanted to live out your fantasy of being an anthropomorphic duck aiming to become a boxing champion in a video game that looks and plays like a cross between Punch-Out!! and Madworld? If you never had that fantasy, then you’re definitely not as weird as the people who did, but either way it will become a reality on July 9th when Mexican indie developer Bromio releases Pato Box on Nintendo Switch.

The game, already released on Steam, was Kickstarted back in 2017 and sees players take control of the eponymous Pato in both 3D adventure levels featuring puzzles and mini-games, and Punch-Out!! style 2D boxing matches against boss characters. I’ve seen the game referred to as rhythm action as well, and the product listing makes mention of the soundtrack apparently being bangin’. There’s also an arcade mode and Switch-exclusive motion controls (which may well be shite), so you’re getting plenty of duck for your buck. Fifteen bucks to be precise, unless you pre-order it and get a 10% discount.

Punch-Out!! is a franchise Nintendo has actually given some love to in recent-ish years – more so than F-Zero anyway – with the brilliant Wii version released in 2009, but two consoles have been around since then with little more than a sniff of anything new. Pato Box looks as if it not only apes the NES classic in all the right ways, but also adds a decent helping of originality to its noir comic-book visuals, producing an impressive package. Basically, it looks awesome. I’m in.

Hey Dad, I Don’t Think I’m Going to do Hamster Style Any More

That’s nice, but Overwatch is. The game’s 28th hero was announced this week to be Wrecking Ball – a hamster in a mech, The super-intelligent hamster is another creation of Harold Winston, the scientist who mentored talking gorilla hero Winston. Hammond escaped the Horizon Lunar Colony when all the other hyper-intelligent animal experiments killed all the scientists and buggered off.

A tank hero, Wrecking Ball is equipped with some weak-looking machine guns, a grappling hook for swinging around the battlefield (which actually looks pretty rad) that can be combined with a slam attack to drop down on enemies, an ability to boost his own shields, and an ultimate that drops a bunch of proximity mines. He looks… pretty fucking ridiculous actually, but I’m definitely up for swinging and rolling about the battlefield for a totally different play style.

Overwatch Central have had a chance to play the character on the PTR and struggled to see when he would be a useful hero right now, but these things always get buffed and nerfed on the reg, so he’ll have his day in the sun at some point. He currently looks like a mix between Doomfist and D.Va in that he’s pretty mobile. has a slam attack, and also boasts some relatively weak arm cannons on his mech. Still, more tanks is a good thing. I am the type of scumbag that plays Overwatch on PS4 so I can’t tell you if he’s any good or not until he gets his console release, but PC players can let me know in the comments if he sucks or not.

Actual gameplay footage of Hammond. Yeah, I know that’s not a hamster. Shut up.

Right, that’s your lot for this week; I’m off to watch the World Cup. See you in seven.

Crazy Taxi on GameCube was my jam in high school. So many good memories with that system. Also, little sad that Wrecking Ball doesn’t have a solid fit in with the rest of the Overwatch heros yet, but he’s still fun to play. His grappling system is weird because it’s like a pole, and the pole just goes right thru objects, so physics-wise it doesn’t make any sense. It should act more like a cable, imo.

I completely forgot Crazy Taxi was ported to PS2 and GameCube! It’s such a great console.
Yeah I couldn’t really tell what the Overwatch Central dude was actually hooking on to, and I’m not expecting a Spider-Man beater, but he does look fun to play. His guns did look weak though, but that could be a spread issue – how did you find them?

I thought his guns were a little week too, but not so different from D.Va.