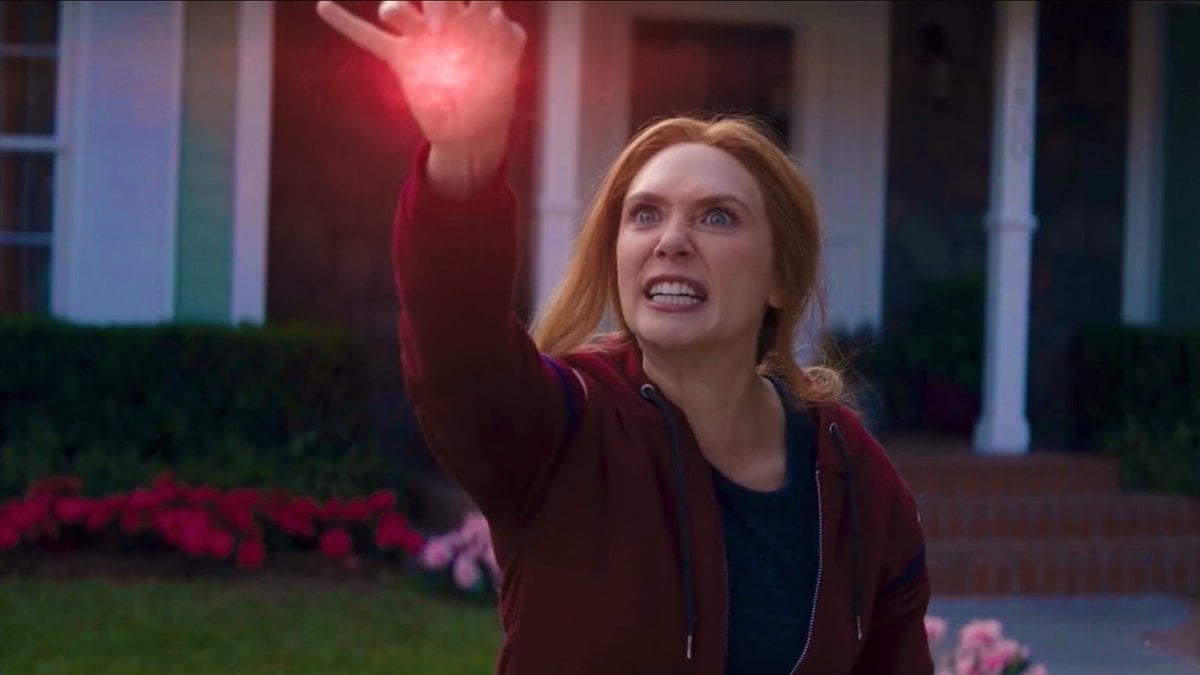 With only two weeks left until its grand finale, WandaVision had a portion of its audience worried over what direction it would take on the way to concluding its possibly endangered story. Would the series end up being predictable or would it go absolutely nuts with lore and mystery in its last three episodes of insanity? Luckily- and let’s be honest it’s completely unsurprising at this point- the show has not fallen from greatness as it ingeniously hints at an even larger overarching narrative for the Maximoff family. Like Westview’s fictional barrier, episode seven of the Marvel Cinematic Universe’s premiere Disney+ show continues to expand its big enigma in brilliant ways. However, what WandaVision mistakingly does during its arguably most climactic point is slightly slip a bit in terms of pacing.

“Breaking the Fourth Wall” continues directly after Wanda’s Halloween conundrum as the Avenger suffers from a power-induced hangover in a Modern Family homage-littered episode. In need of a peaceful session to ease her mind, Wanda conveniently calls upon her neighbor Agnes to watch over Tommy and Billy while her husband and Pietro remain missing. Meanwhile all the way across town, the Vision makes a new ally as he formally meets Darcy Lewis who is now trapped in Westview but is able to remember her past from his previously discovered power. Outside of all the chaos though, Monica and Hayward both make different steps into infiltrating New Jersey’s hotspot as those loyal to the agents of S.W.O.R.D. make their allegiances clear in helping solve the crisis at hand.

Right off the bat, WandaVision’s seventh installment makes one thing known to its audience: the titular feminine lead is of course closer to collapse than ever before as she is being guilted into coming to terms with reality. As the cognitive world around her continues to change due to her powers, it is quite obvious that Westview will not be able to hold up for much longer. Fans of Scarlet Witch already know this, but Marvel Studios seems to be really pulling more from the roots of its comic book source material with each episode that passes. WandaVision is heavily focused on telling the story of how Wanda Maximoff is on the verge of a psychotic breakdown- or rather is already in one, but there is clearly an overarching villain making their way into the last three episodes that she will have to confront to save the world (or multiverse). That villain may or may not be the witch Agnes- or rather Agatha Harkness as viewers discovered in this episode.

Her theme may imply that “it was Agatha all along” but any Marvel comic book fanatic knows that a colossal-sized twist is brewing behind the scenes; preparing to scare audiences right around the corner. To those wanting to keep its possible mystery a secret, let this be your warning at potential spoilers for the series lying ahead, but if you have been on social media in the last few hours then you probably know the theories. In the Marvel comics, Agatha Harkness is a witch created by Mephisto, an extra-dimensional demon who is intended to reflect the human conception of the devil. Later becoming a massive threat to the X-Men and Avengers, Mephisto first appeared as a mere fly to the heroes he surrounded- yes, the same fly that appeared in this episode for a split three seconds is likely the main villain pulling the strings.

In the comics, Wanda’s twins along with Agatha are creations of the demon, however, the former actually has a body and history that is affected by Scarlet Witch’s imagination which would explain how Vision was able to see a different side of her. No one obviously knows what will happen with Agatha, but the insect’s appearance clearly indicates that Mephisto is at work again as he reemerges from obscurity to the spotlight in the comic book empire’s most popular format. With Doctor Strange and The Multiverse of Madness set to feature Wanda Maximoff, there is a strong possibility that Mephisto could also be a critical player in Marvel’s next phase of movies and streaming shows. Whether or not the villain will meet his downfall in WandaVision– or even an appearance in the physical form- is completely unknown, but based on the mention of the Nexus, Mephisto’s rise to power is a likely probability for the show’s final episode.

Despite all the talk of a wonderful setup for its penultimate event and aftermath, episode seven still suffers through one major fault: its pacing. The one thing WandaVision never had trouble with before becomes quite messy as it suddenly stumbles when it comes to making its way toward a well-earned payoff. While the last third of its runtime is purely brilliant, those first two parts struggle with keeping things together in a speedwell matter. The beginning and middle of “Breaking the Fourth Wall” feel like a slow burn to its last ten minutes as it sets the stage for a massive reveal and potential battle. That is not to say everything going on with Vision or S.W.O.R.D. is boring by any means as it all remains intriguing, but it is edited in a matter that feels off-putting and slow. Whereas the other episodes gradually flowed to the ending, episode seven never feels as if it is quite getting there due to its chronology.

Nonetheless, while “Breaking the Fourth Wall” may have a rather haphazard pacing and buildup to its excellent closing moments, WandaVision has laid the groundwork for a genius ending as it swivels around unveiling all of its secrets. The show has continually expanded upon its purpose as it dives into the psychology of the psychokinetic Avenger with grace and enjoyment. As the Maximoff family’s ultimate nightmare begins to come to fruition, there is no telling how Marvel may string all of WandaVision’s events together. There is a marvelous reason as to why audiences love the show; the mystery and characters are simply fantastic as it barrels through multiple eras of television all harnessing their unique quirks and traditions. I do not know how many times I will say it each week and I am sure readers feel the same, but the anticipation for the next episode continues to escalate.