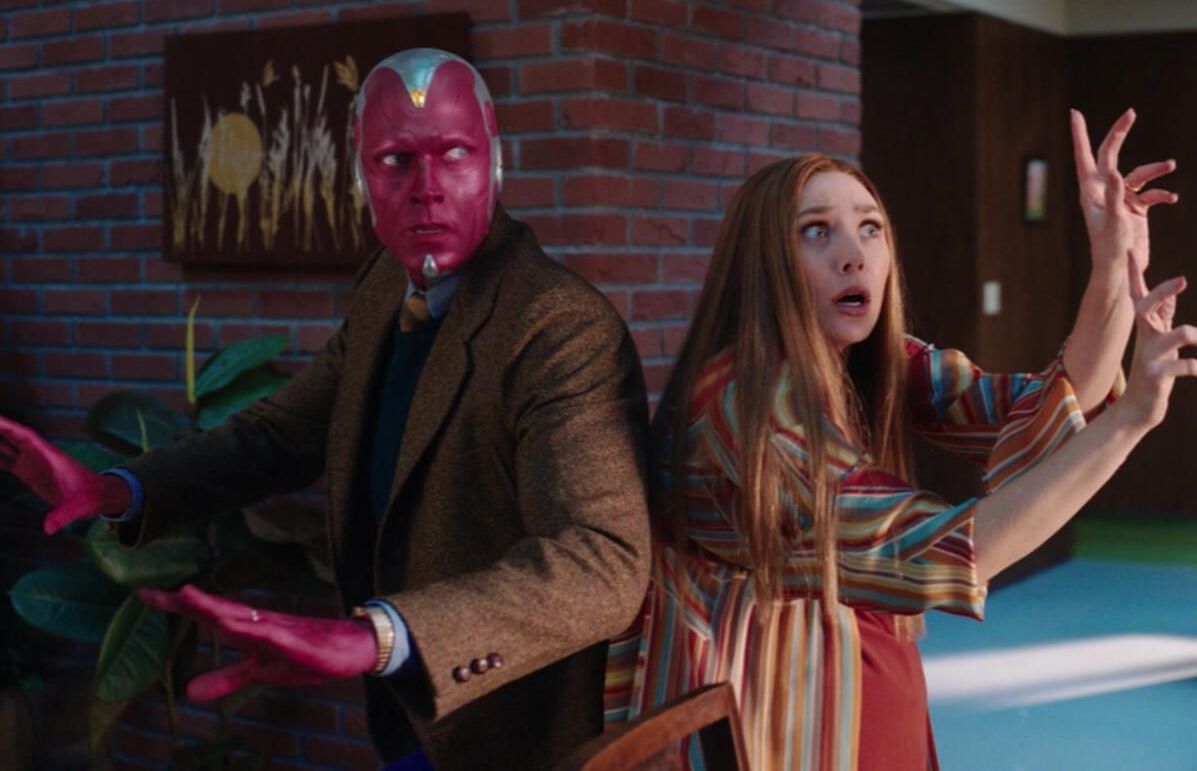 In its premiere back-to-back bundle of insanity, WandaVision was welcomed to Disney+ with high-spirits as the half sitcom half mystery series embraced a new era for the Marvel Cinematic Universe. After hampering the medium of television for the last decade with several misfires and decent successes across ABC and Netflix, the age-defining studio has finally put its own foot in the ground to get their iconic comic book characters made right on the small screen. While its first two episodes perhaps took a self-centered focus in introducing the town of Westview to audiences, three fully embraces the potential overarching plan WandaVision has in store. Its continual stance of lunacy and spearheading a sinister mystery is yet to fail as episode three heads forward in unraveling viewer questions with more breadcrumbs and some hefty cannon fire that opens the door to more questions.

Episode three picks up a mere twelve hours after where Wanda and Vision last left off as the former now sits four months pregnant in a matter of one nightfall. Now proudly entering the age of color entertainment and ready to begin facing the existential crisis at hand, WandaVision’s latest 70s inspired installment makes a daring move at bringing the characters back to the real world as multiple parties attempt to storm Westview’s alarming reality. When Maximoff and the second coming of Jarvis become strikingly close to delivering their first child as the minutes go by, several of their friends begin to tamper into their privacy that may not actually be so secretive to them. In the same comedic fashion as the first two chapters, Wanda and Vision are forced to confront those around them as they attempt to lay low beneath the fact that they are likely to have a baby in the coming hours: a significant problem considering her last few public appearances in town showed that she was far from going into labor.

Outside of course the apparent attempts to take a stab at the show’s entire enigma- which we will get to soon- what WandaVision does so excellently once again is delivering a great sense of thematically appropriate humor. Elizabeth Olsen and Paul Bettany are giving it their all as the two get to play sides of their stern characters who never get to tackle the comedic roles like Robert Downey Jr. or Chris Hemsworth always have in this universe. The writing however is what really helps the two pull through to create something memorable as the show skips around from era to era. As episode three takes a focus on birth, the comedy brings both ludicrous and natural ideas to the spotlight around the subject. From living storks and breaking water rainfalls to fruit baby-size comparisons double downing as coverups, the show’s writing constantly delivers humor that feels so in line with its current tone and situation. While once again there are a lot of expected punchlines, nothing ever hits eye-rolling or unbearably grotesque territory as everything delivers perfectly.

Speaking of delivery, episode three is by far the series’ most notable attempt yet at tackling reality as the leads and minors confront the suspicious events going on in their home town. WandaVision this week finally makes some rather bold implications as to what might be going on in the titular character’s delusional fantasy as entities around the heroes tug back on the curtain repeatedly to draw out some truth. There may only be three players in unraveling the mystery outside of Wanda and Vision during this thirty-minute block, but Geraldine, Agnes, and Herb present our heroes with a dose of realism as all of these recurring townsfolk clearly know that something terribly wrong is going on in their neighborhood- and they are completely in on the secret too. It was apparent from the premiere that Agnes and Geraldine were attempting to distract Wanda from remembering the present, but now Herb’s interactions with Vision further support this as the man-made machine is evidently being duped by his friends too.

After her newborn twins lay in their cradle, Wanda proceeds to mention to Geraldine that she once had a twin named Pietro- the ill-fated Quicksilver who met his demise during the action-packed ending of Avengers: Age of Ultron where Vision and the gifted children of Magneto first ever appeared on the big screen. In a moment of sudden sadness for the remaining Maximoff twin, Geraldine slips when helping Wanda as she asks if she is referring to her very same brother who was killed by Ultron during the battle for Sokovia. After questioning who Geraldine really is, when Vision returns from his hair-raising confrontation with Herb and Agnes, Wanda creepily smiles to the thought of thrusting Geraldine from their existence. Rather than Wanda being controlled by a force around her, the character’s way of facing the perplexing agent of S.W.O.R.D. shows that perhaps she may just have a full grasp of the fake world that resides around her- however, the aftermath for Geraldine may show otherwise.

While the beekeeper from the last episode was a sign of impending forces to arrive in Westview, Geraldine’s ending signifies a race to infiltrate and save Wanda from living her greatest lie yet. Whether or not Wanda is being forced into her own fantasy is yet to be determined, but if episode three tells us anything it is that she will certainly have a burdensome time destroying this world both she and viewers have come to quickly love. As the next episode will presumably face the threat of the 80s, there is no doubt that the rise of terrorism against Westview will come to bite Wanda. As WandaVision begins to rapidly close in on tackling the present, the show’s hopefully genius by the end of it all plan will come to fruition. WandaVision has established a great foundation, but like its fantastic array of comedic quips, it is going to need one great punchline to pull everything together. With a skeleton built for A.I.M. and S.W.O.R.D.’s introductions, the wait for more WandaVision only becomes harder each week.