‘Upgrade Soul’ – A Thoughtful Take on Identity and Change

Publisher Lionforge’s Upgrade Soul is a touching, but slightly flawed, story examining concepts such as immortality and identity. Imagine living forever. The consequences of old age will no longer be issues. Those aches and pains that come from brittle bones, sore joints, and memory loss will simply just disappear. Unlike supernatural sources, such as those ingrained in magical and omnipotent beings, Upgrade Soul uses hard science, and technology to guarantee unlimited amounts of lifetimes. This company stores the mind and memories in a brand new host made of flesh and blood. With this new technology you can see the world, go on adventures that the new body can handle, and ultimately have no regrets. Upgrade Soul discusses themes of the self, identity, and change, asking it’s audience how closely tied the self is to the body. Ezra Clayton Daniels, the writer and artist, introduces these themes in the winner of the 2017 Dwayne McDuffie Award for Diversity in Comics.

Cloning and AI have been two important topics when it comes to the concept of identity. When transferring a mind to a new host, is the new host the same being or a continuation of the former life branching off into someone new? Upgrade Soul attempts to answer these questions. Hank and Molly Nonnar decide to celebrate their 45th anniversary submitting themselves to this experimental rejuvenation procedure. If the procedure is a success, their memories will be transferred into new youthful bodies, augmented and clear of injuries and other maladies. Of course, like many science fiction stories, steps don’t go according to plan. Their new bodies are stronger and more intelligent but are severely deformed. The Nonnars are not only having a hard time accepting their potato-like appearance, but they also discover that the original bodies are still alive, retaining the memories. Once both sets of bodies recover and regain their composure, they are faced with the moral quandary. Do the new beings have a responsibility to their old selves, or are they allowed to live their new lives any way they please? 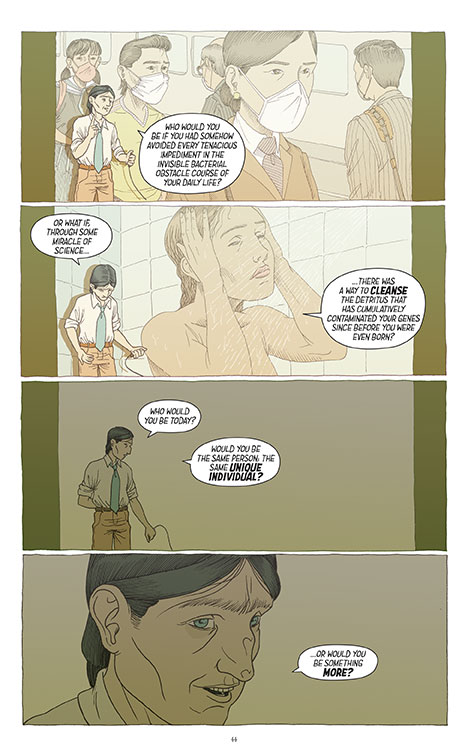 Will a new body change the self?

With a unique concept and a gorgeous visual style, Upgrade Soul is a wonderful right from the start. Molly, a scientist, and her husband, Hank, a science fiction/fantasy writer, are perfect for one another. They are full-heartedly in love and wish for nothing more than to continue their romance for ages to come. Though they are reluctant to go on with the procedure, they are excited to engage in this new endeavor. By the time the procedure is perfected, they may not be alive, or have the finances, but they dive head first. Thankfully, unlike some stories, no time is wasted, and within the first chapter they undergo the procedure. The story uses flashbacks to give the audience better insight into the Nonnars, and the sources for their decisions. Without missing a beat, the truth is revealed quite quickly, and the two versions meet face to face. They instantly bicker, trade philosophies, and find a need to be with one another. Though they do go into details and get deeper into the concept of identity, it wades away. That’s when Upgrade Soul loses a little focus.

As fast as the story dives into the experiment, it expands into new territories of romance, and illegal black market sciences. The main story detracts, and suddenly new characters are introduced bringing in drama and pull away from the main core values. Initially, these new pieces seem to support the themes. A shrinking violet with a facial deformity and a close connection to the company wants to fit in to the world. Is she able to live a normal life, even though she doesn’t look like most people? Can this new experiment be able to help her? Then when it’s discovered that the company cut corners it brings into question the ethics of getting results. What’s more important, ensuring that results are achieved quickly with imperfections, or getting biding time until they can get the perfect result? Though these new ideas are intriguing, they change into soap opera drama. The new characters’ developments are suddenly rushed, and lose a little credibility. They lightly touch upon the core ethics and distract what should be the focus of the story, the will of the Nonnars, the originals and the upgrades.

The story dives into other issues, using race and gender as a vehicle to discuss the idea of evolution and change. Ideas change along with individuals.  Hank took over his father’s science fiction series, that deals with the parables of slavery and racism. Molly is a famous geneticist, who may not see the end of her work. By bringing together both the science and the arts, Upgrade Soul is able to cover all the bases of ethics and the duty to the self. Daniels’ writing is superb, and he really grasps the two main characters personalities perfectly. He finds their unique and individual voices and ensures that they are never acting too far out of character. As mentioned, though a little out of place, the subplots are still written with heart and soul. If those sub-plots were better integrated, then other key scenes wouldn’t have felt rushed. Most importantly, Daniels doesn’t treat the audience with condescension. The reader is able to piece together the allegory, without having too many blanket statements or lazy clichés thrown in. 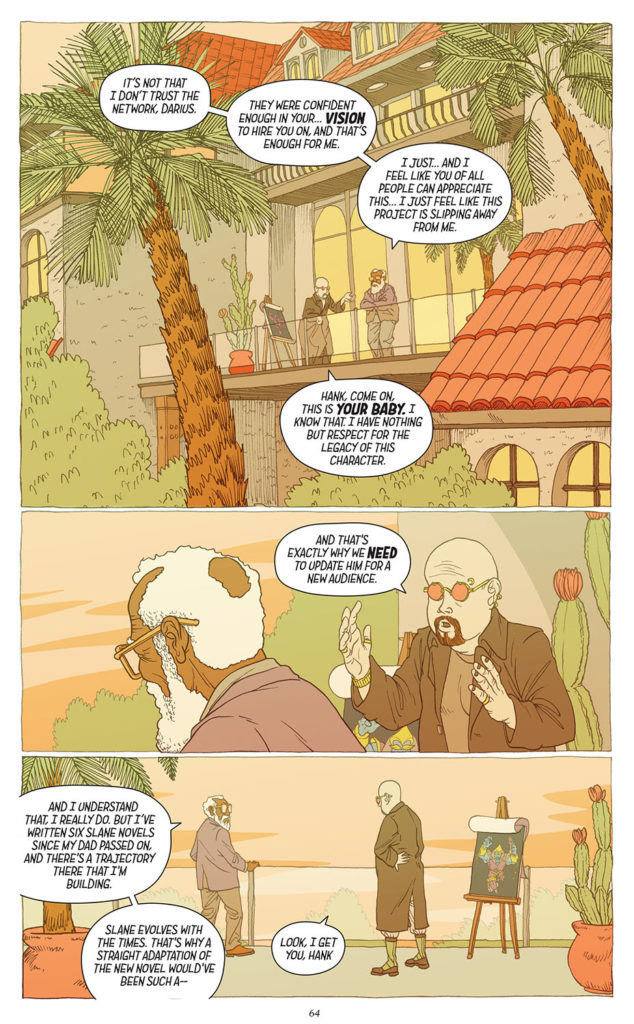 Hank’s concerns on adapting his characters for the movies

Daniels artistic talent is superb. Though some characters accidentally fall into the terrain of the uncanny valley every once in a while, their expressions are on point. Each character has their own unique look. It’s easy to tell when they are smiling to be polite, or displaying tremendous amounts of childish glee. Even the malformed new clones, with their lacks of cheeks, eyebrows, and lips, are gratifyingly expressive. Though humanoid they have odd proportions and colours, not to mention a lack of hair and ears, every movement they make seems human.

Upgrade Soul is a thought-provoking read. The questions about the self and identity are fascinating and Daniels introduces them through four wonderfully written characters. This colourful book with its distinctive look is close to being perfect. The story only loses focus with those minor storylines, that shouldn’t be removed entirely; they just need to be edited a little better. This could have led to more time spent to expand the main characters and lead to a comforting conclusion, but, it falls short with a rushed ending.

Ghosts and More in this Year’s Hellboy Winter Special

A Cataclysmic Event: ‘No Man’s Land’ is The Double-Edged Sword of The Batman Mythos