Toynk Toys has come a long way since its humble inception in 2001 when it was operating from a small apartment in Chicago, Illinois. According to their website, the company now boasts a 125,000 square foot facility which is home to their offices, retail store, and warehouse – not to mention they regularly visit Comic-Cons around the world and now staff up to fifty employees. To be honest, I’ve never ordered anything from the company and so this would be the very first time I have ever received a package from Toynk, and while I am still on the fence about many of their products, I have to admit I’m more than satisfied with the Fallout LookSee box I received.

Back in June, I attended E3 and if you’ve read my article, you’ll know that I wasn’t at all a fan of my trip to the world’s most important gaming convention. Of the many things I complained about in that article, what I did not mention was my sheer lack of disappointment from the physical loot boxes I purchased on the show floor. There were several choices I could have made when buying a loot box but being the host the NXpress Nintendo Podcast, I thought it only made sense I purchase the Nintendo-related mystery boxes, hoping that I would discover something cool inside and thus have something interesting to talk about on the show. Unfortunately, the most interesting item I received in those mystery boxes was a gigantic Pikachu coffee mug, and while I’m sure many Pokemon fans would love to have one, it just wasn’t enough to justify the steep price tag.

For the unfamiliar, the advertisements for these mystery boxes stated that each box contained $100 worth of merchandise yet only cost $40 USD ($43.70 in total with tax). Obviously, anyone with half a brain would know that there is no way a company can continue to exist and make a profit if they are losing roughly $60 on every mystery box they sell. I wasn’t expecting to walk away with a $100 worth of cool merch, but I was expecting something more than a tacky pair of Legend of Zelda socks and some air fresheners for my car. The entire package was so disappointing, I ended up throwing everything in the trash except for the Pikachu coffee mug. Luckily this time around I am more than pleased with the Fallout mystery box I received from Toynk. 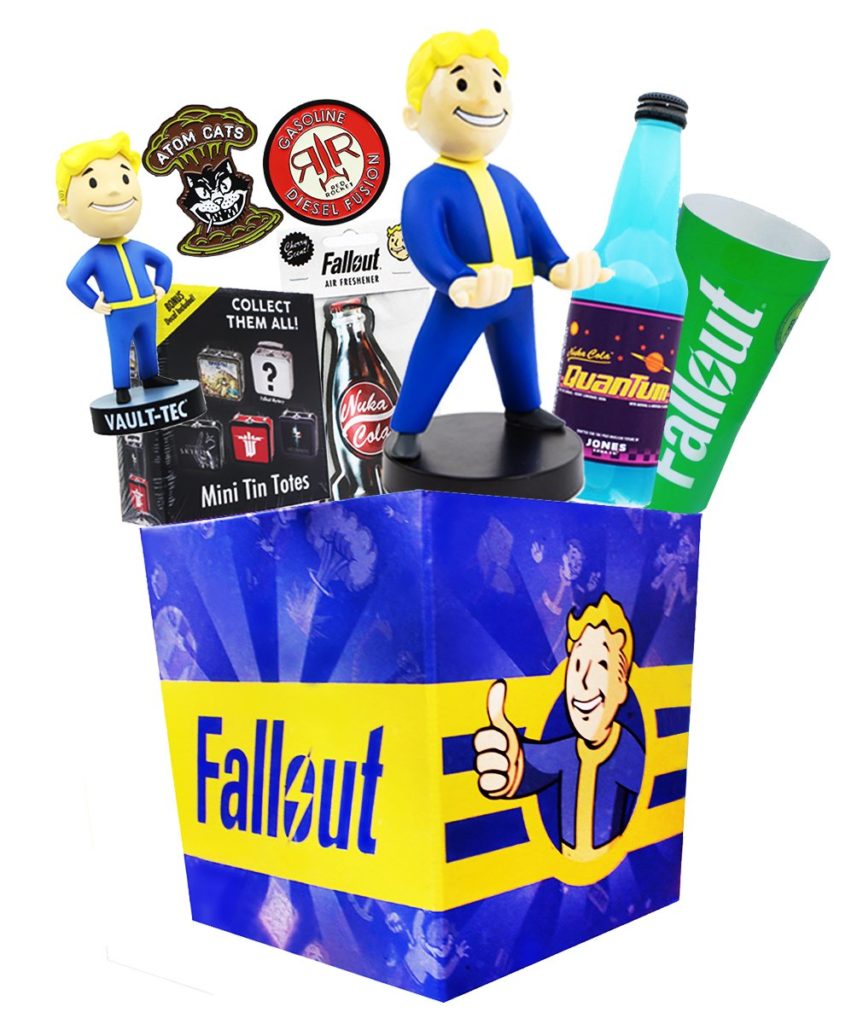 Much like the mystery boxes I purchased at E3, the Fallout Gift Box is also advertised as having a value-price of $100 worth of cool Fallout collectibles – and while I have no idea if this is at all accurate (although, I highly doubt it), I can say that I at least like each and every item included in the set.

Here’s what I got.

As with the physical loot boxes I bought at E3, this mystery box came conveniently packaged in a gift box that was decorated to match Bethesda’s famous property and featured the iconic Vault Boy on the front cover. Inside was an 8-inch tall Vault Boy cell phone holder, a mystery mini tote, a Vault Boy bobblehead, a Fallout pin set (which was only previously sold at San Diego ComicCon), a four leaf clover 16oz plastic cup, a bottle of Nuka Cola, and yes, an air freshener.

While I don’t really care much for the air freshener, this might be the coolest looking air freshener I’ve ever seen. I know that sounds ridiculous but seriously, this air freshener is pretty dope! Meanwhile, the bobblehead figure looks fantastic and is a welcome addition to my already overcrowded collection of video game figurines, most of which consists of Nintendo’s amiibo. As someone who collects pins, I was more than happy to receive the SDCC collectible set which includes artwork for Gasoline Diesel Fusion and Atom Cats, two items found in the Fallout series. And while the plastic cup is nothing more than a plastic cup, at least it comes in useful on hot summer days. 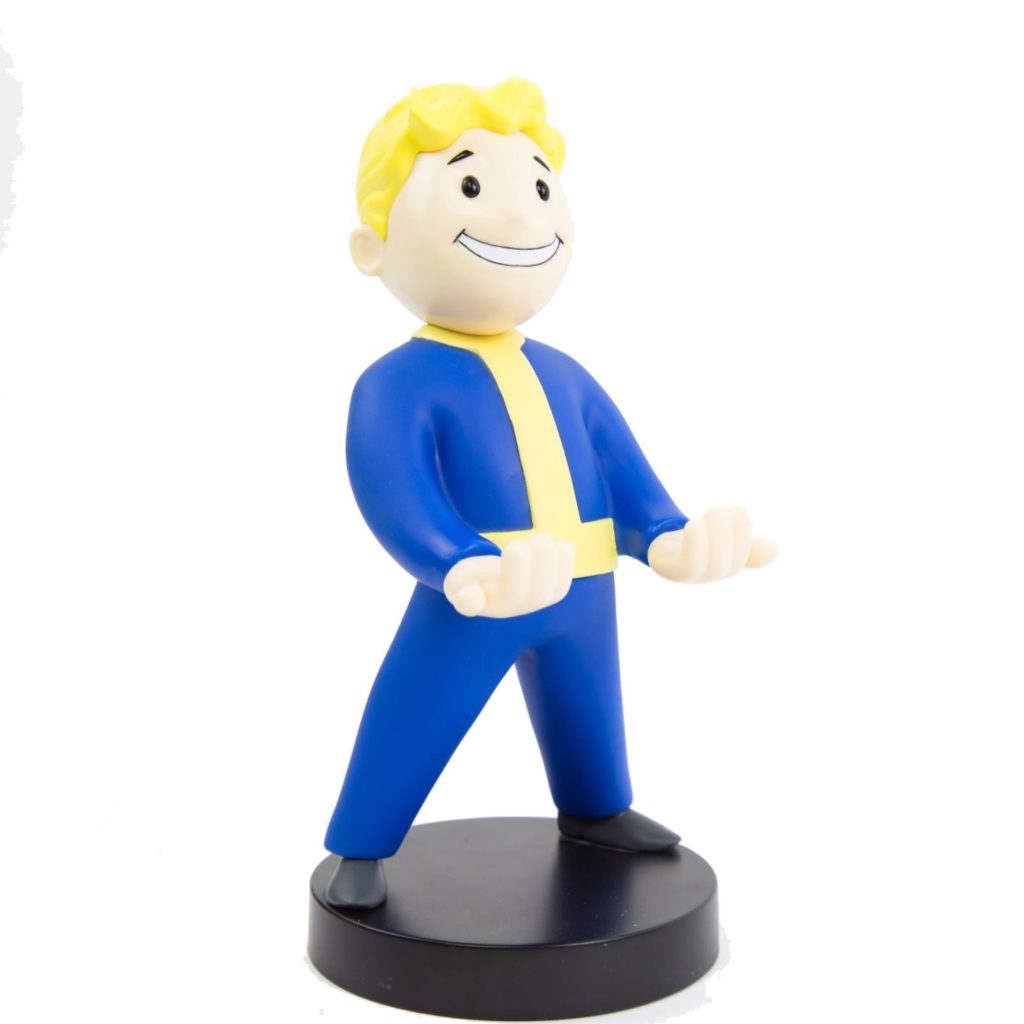 Of all the items, however, my favourite of the bunch would have to be the cell phone holder which also doubles as a game controller holder and includes a micro USB charging cable. Unfortunately, instead of receiving the Fallout version of the mini tin tote, they packaged the Skyrim edition instead. For the unfamiliar, each tin tote comes with a matching sticker, measures 14 x 11.9 x 5.1 cm, is made of metal and features designs from Bethesda’s most famous IPs. I guess if you have kids, it would make for one heck of a cool lunch box, although given the size, you wouldn’t be able to cram much food inside. Still, I was hoping to get the Fallout tin box, if only because I was told it is the hardest to find.

Last but not least, the strangest and maybe coolest item I received is an actual bottle of Nuka Cola. Obviously, I’m not going to drink it (although I’m tempted to taste it) but I have to admit, I love the packaging and I intend on adding it to my mini bar.

While I may not actually make use of some of these items, after doing some quick research online, it seems that the Fallout LookSee Box is actually sold at a fair price given that the Vault Boy phone/controller holder retails at Walmart for $57 and the bobblehead figures are each sold for $15 on the Bethesda website. Of course, one could maybe save money and individually purchase the items that only interest them but that would also mean they would be losing out on what is actually a great package for any fan of the Fallout series.

In short, the Fallout LookSee Box from Toynk is well worth the price and given how satisfied I am with the delivery and the products, I will most likely order something from them again.