Twenty Years Later: ‘A Simple Plan’ is a Perfect Time Capsule of the Mid-Budget Thriller

We live in a world of extremes today — political, social, economic — so it’s only natural that our film industry is polarized too. Movies are either made on a shoestring budget (think Blumhouse’s $5 million model) or cost more than the GDPs of small countries (how much did Infinity War cost again?). This disparity began in the ‘90s when the indie boom (led by Quentin Tarantino, Kevin Smith and the like) came up against the obscene ballooning of blockbuster budgets (Independence Day, Armageddon). The dichotomy was clear: a great story didn’t need millions, but blowing up the world was consistently getting more and more expensive.

Enter Sam Raimi. Before Spider-Man, Raimi was a master of mixing comedy with the horror genre. He blew on the scene with Evil Dead and Evil Dead 2, flirted with the superhero genre in Darkman, and took a small left turn with The Quick and the Dead. By all measures, A Simple Plan was his first time as a “serious” director, as gone was any semblance of camp or winking to the audience. Rather than condescending through meta-commentary, it was unabashed in its embrace of thriller tropes — a moral dilemma instigated by money, friends growing paranoid of each other, good men forced to do bad things, and a claustrophobic location that traps the characters. 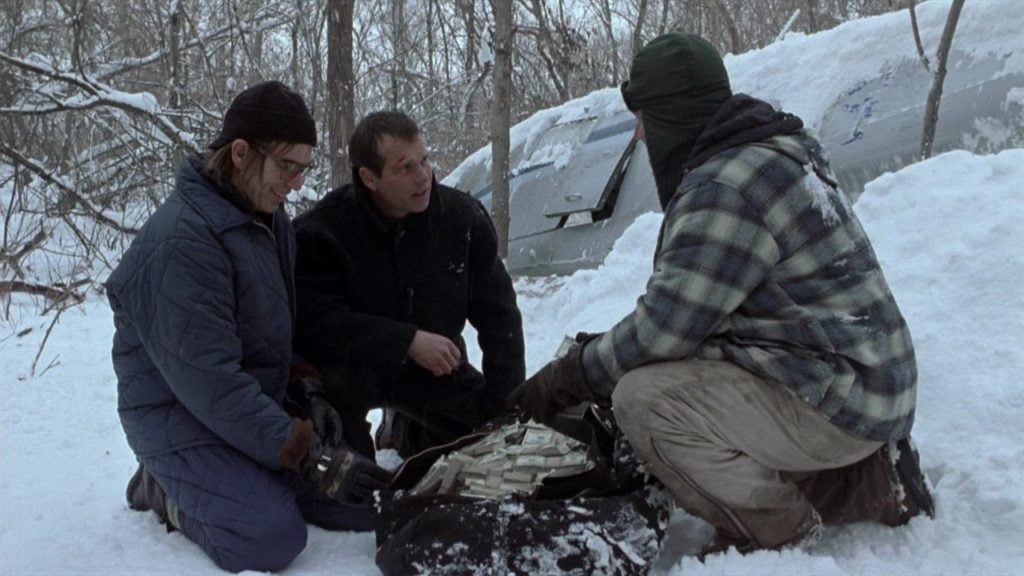 The snowy noir never quite caught on (rain and blistering heat exude more sex appeal), but it’s the prime isolating milieu for Hank Mitchell (Bill Paxton), his simple brother, Jacob (Billy Bob Thornton), and dimwitted friend Lou (Brent Briscoe), who all stumble upon a downed plane and a few million in cash. Hank insists on calling the police, but is persuaded into hiding the cash until spring, then splitting the dough if no one comes to claim it. It’s a tantalizing proposition — a potential life changer literally dropped from the heavens.

Location is key to A Simple Plan‘s bait and switch. “The snow covers all” is the cliche, but here it blankets a taut thriller premise in respectability. Moral dilemmas are exposed like open wounds in the wintertime, as chases and races against time are slower. What is sexy in the simmering heat is now languorous and ripe to withhold a climax of any kind. The audience is forced to be patient, and that’s a huge gamble when your film is largely about economic anxiety. One could imagine this story being told today with more cell phones, and expanded for a world inundated with social media but bereft of privacy — an ever dawning drawback to our great evolving technology is that our crime movie plots will have to get cleverer and cleverer in the coming years.

If wintry noir gives you echoes of the Coen Brothers’ Fargo, that may be because Raimi and the brothers have long been colleagues. There’s no doubt that Fargo informed a few frames of this picture, though the Coens’ brand of sly dark humor is almost violently absent here. This is a film about the “sins of the father” — not in the Biblical sense, but in the sense of familial failings. Hank has inherited his father’s quiet and mundane life, which is enough to keep a roof over his head for his wife (Bridget Fonda) and unborn baby, but Jacob is a born loser, having few job prospects and resigned to his status as the town’s least eligible bachelor.

It’s their relationship that elevates A Simple Plan above simple thriller status and more into the realm of Shakespearean tragedy. Perhaps it’s why the thriller genre is dead. What few mid-budget movies are left are almost required to thrill. In this case, “thrill” implies to mindlessly or gratuitously entertain, which is not a huge cinematic crime. Disposability is the greater sin of genre cinema; there’s got to be just a little more. More emotional depth. A clearer arc or thesis. Something beyond the mystery or resolution. 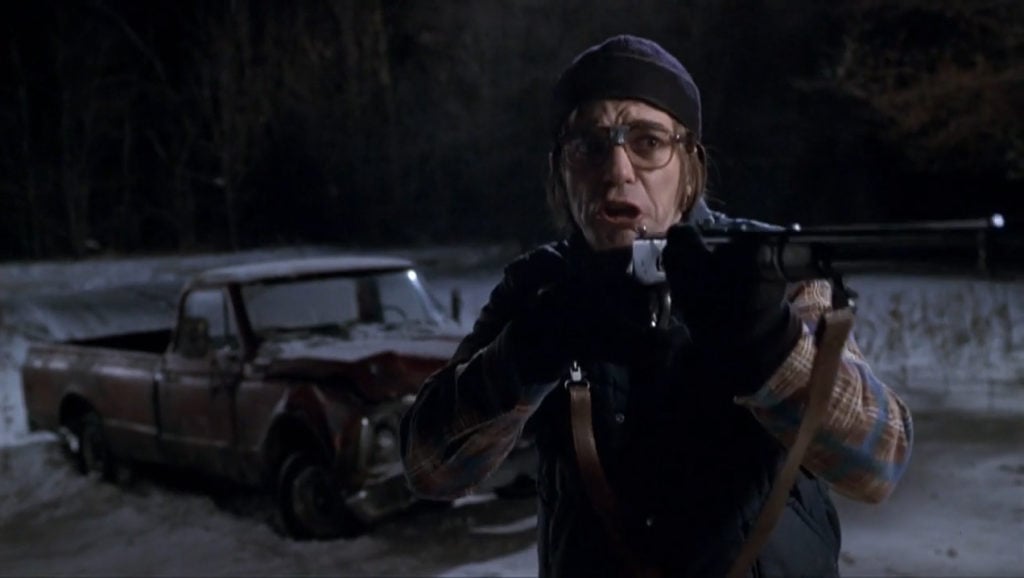 This 1998 film has a few antecedents. Recently, Hell or High Water took the fraught political climate and channeled it into a western caper. Scott Frank’s The Lookout was another wintry heist outing that told a story about redemption. However, those two are very much in the vein of pulp. A Simple Plan is sparse to its core, only thrilling in its moral quandaries and suspense. It is somber, and ultimately deeply sad. Bill Paxton’s Hank Mitchell is one of cinema’s great “good” men forced to do bad things (though ‘forced’ is a funny word when summarizing a thriller on morality — enticed or tempted are more appropriate).

It’s worth taking a few words to praise the late Bill Paxton. Billy Bob Thornton may have garnered all the accolades (including a Best Supporting Actor Oscar nomination), but Paxton is the glue of the entire endeavor. As a performer, he was so efficient and economical that his talent and range was mightily overlooked. He excelled at the high-concept genre fare (Aliens, Weird Science), but had a down-home sincerity that afforded him the malleability to play a range of different bits of intelligence and statuses. He could be the clean-cut astronaut (Apollo 13), the rich asshole (Vertical Limit), the seasoned storm chaser (Twister) and even the evangelical serial killer (Frailty), but was the type of giant of screen acting who could fit in anywhere.

Yet, A Simple Plan‘s Hank is his crowning achievement. He’s a man who maybe couldn’t make it to Harvard, but had enough smarts to attend and finish college. He is a humble man who isn’t destined for great things, but can attain the minimum — a loving wife, a home, and a child. Paxton plays him calm, measured, and rational — a fox among rabbits. We buy that murder is his last resort, and that no killing comes easy. It’s Paxton’s relaxed cadence that sells it, along with his polite smiles and weary eyes. It’s how he reasons and condescends and strategizes everything from the minutiae of his life to the intricacies of his schemes that makes his perfomrance a brilliant exercise in economy of character.

Likewise, Thornton plays Jacob as a dim bulb for sure, but one capable of moments of tremendous clarity. A dinner table conversation between the brothers illustrates how to effectively reverse character roles through contradictions. Hank — ever the sure-footed, firm thinker — is still wrapped up in his father’s legend, blinded by his inability to recognize the man’s failings. It’s Jacob who lays it out for him: their father committed suicide to fulfill a life insurance policy for the family. “What did you think?” he tells a stunned Hank. It’s the most important scene in the film, as the moral lines between brothers are clearly delineated. Hank believes so strongly in his and his family’s goodness that he can’t comprehend the limits of their desperation. Jacob may be a goofball, but he never whiteouts the truth. 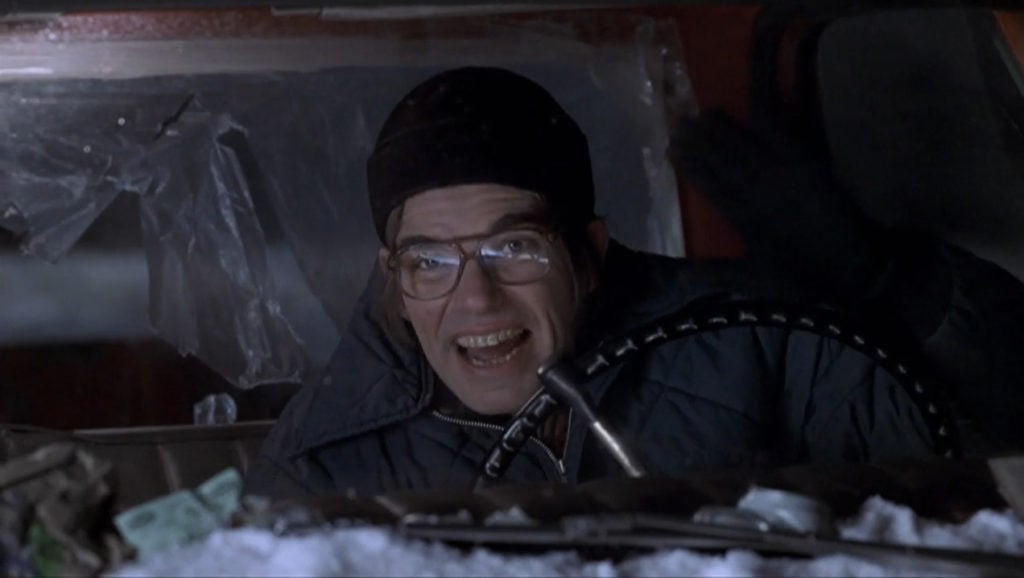 It’s rare for thrillers to contain this much empathy, but Sam Raimi clearly respects both brothers as two sides of the oft-disregarded flyover country — that’s how the film pulls off an ending reminiscent of Of Mice and Men, where one brother is ‘sacrificed’ for the other to live. The ‘owner’ of the lost millions is an extortionist (Gary Cole in a chilling bit part) posing as an FBI agent out to claim the money, but Hank gets the drop on him but now has multiple dead bodies to explain. Beaten down by life and guilt, Jacob gives Hank his alibi by asking him to “make it look like the bad guy did it.” Hank obliges with a bullet to the back. Jacob is more of a character than Of Mice and Men’s Lenny ever was (who, let’s face it, became a paragon for prop-disabled characters, and has provided cover for countless movie stereotypes).

A Simple Plan has endured for twenty years because it rejects all the tropes that mired thrillers in their heyday. It’s simple for a filmmaker to punish his characters for stepping out of societal and moral bounds. However, it takes a steady hand to say something about an entire genre while doing it. Hank escapes with his life, but the money has already hexed his family. We eventually learn that the random bills have been marked by the FBI, so he’s forced to burn them. No comfy life. No buying back the farm. Just a string of murders for a slim chance at prosperity. The American dream is worth a lot, but even murder isn’t high enough a price for the downtrodden. Unlike the forgotten middle class, the mid-budget thriller got squeezed out for its faults. A Simple Plan remains a survivor.

Shane Ramirez is a professional actor and videographer, as well as a budding filmmaker and novelist residing in San Marcos, TX. A life-long film enthusiast, Shane has written for everyonesacritic.net and examiner.com, and has produced his own short films. He is versed in the arts of cinematography, photography, and editing. His favorite directors are Andrei Tarkovsky, Terrence Malick, Christopher Nolan, Michelangelo Antonioni and Krzysztof Kieslowski. Contact Shane at [email protected]

‘River’s Edge’ is an Important Look Into Neglect, Sexuality, And Mental Illness