Written by one-of-a-kind Quentin Tarantino (Reservoir Dogs, Pulp Fiction) and directed by Tony Scott (Top Gun, Hunger, Crimson Tide), True Romance is if anything — consistently entertaining. The outlaw-lovers-on-the-run flick became an instant cult classic – an energetic, gruesome and gleefully amoral prototypical road movie that recycles a number of elements of films from the past as far back as Fritz Lang’s You Only Live Once and Nicholas Ray’s They Live by Night. And while those and other more obvious inspirations such as Bonnie and Clyde and Terrence Malick’s Badlands (of which actually borrows its score) are noticeable, it still packs enough verve and gusto to create something entirely fresh and influential in its own right. Dominated by the machismo of Quentin Tarantino and Scott’s slick-polished style (a style he acquired from making music videos and commercials), this wacky, turbulent crime pic is about as good as contemporary Hollywood “dick flicks” get – and all centered around a love story no less. 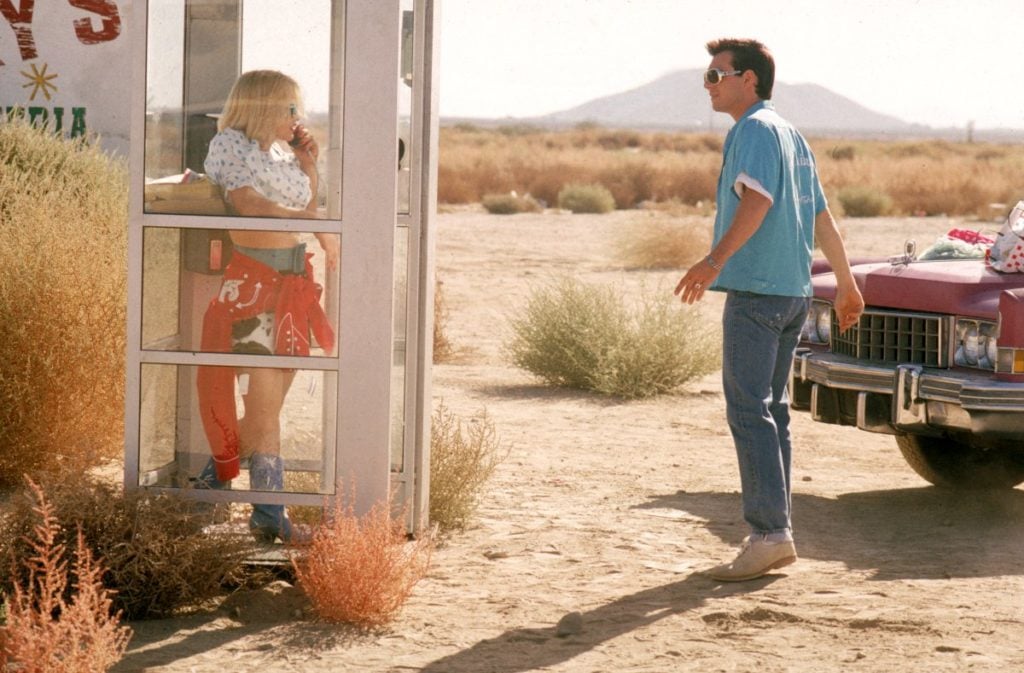 Despite an odd choice, Tony Scott proved an excellent candidate for directing; polishing the rougher edges of Tarantino’s script while keeping the bulk pretty much intact. For a director who seems to have only two gears, extreme close-ups or rapid-fire cuts, Scott managed to punctuate every scene with an exclamation point, both in action and dialogue. Meanwhile, cinematographer, Jeffrey Kimball filters every shot through Detroit in a veil of neon smoke while opening up in the latter half of the film to the sunny side of California. Hans Zimmer’s original music jingles throughout, underscoring a sense that this film is a mad fairy tale, and the abundance of familiar pop songs playing in the background juxtaposes well with the bloodshed.

As a romance, it’s sick and twisted; as an action flick it’s stylish and exciting and as a road movie it’s constantly in motion.

Like Reservoir Dogs, True Romance is filled with an explosive mix of razor-sharp witty dialogue, knifelike macabre humour, grisly action, and gratuitous violence. The filmmakers demonstrate a obsession for pop culture that gives everything a comic strip sensibility. Not only is it self-referential, Tarantino’s script is loaded with energy and brimming with plenty of memorable dialogue, compelling characters, and a labyrinth plot. As a romance, it’s sick and twisted; as an action flick it’s stylish and exciting and as a road movie it’s constantly in motion. And yet through the colorful dialogue, dry and cynical humour and Mexican stand-offs, True Romance features some genuinely touching moments – most notably James Gandolfini’s bloody, protracted motel-room assault on Patricia Arquette’s Alabama (a scene originally trimmed for theatrical release, and later restored for video). The movie’s best scene, bar none; is the un-PC scene in which Clarence’s dad (Dennis Hopper) faces off against Vincent Coccotti (Christopher Walken), the right-hand man of Blue Lou Boyle. Walken has never been more menacing and never have racial slurs been used so well. This critic would argue that this is Tarantino’s second-best monologue (the first heard in the opening of Inglourious Basterds), and Scott’s most skilled direction.

This postmodern love story is a quintessential 1990’s film.

The film is cluttered with a who’s who of Hollywood celebs: Supporting actor Brad Pitt plays a comically disconnected stoner – a barely glimpsed Val Kilmer appears as an imaginary Elvis mentor, a conscience, schizophrenic hallucination to Christian Slater’s Clarence – Gary Oldman steals every scene as Drexel Spivey, a slimy, vicious white pimp who thinks he’s black – and finally Samuel L. Jackson turns up for a remarkable cameo as a drug dealer whose foul mouth gets in the way of his judgment.

True Romance was a pioneer action movie in many respects and remains one of the best-written genre films ever made. Placing an equal importance on dialogue, characters, and action, this postmodern love story is a quintessential 1990’s film.

“Not since Bonnie and Clyde have two people been so good at being bad”.