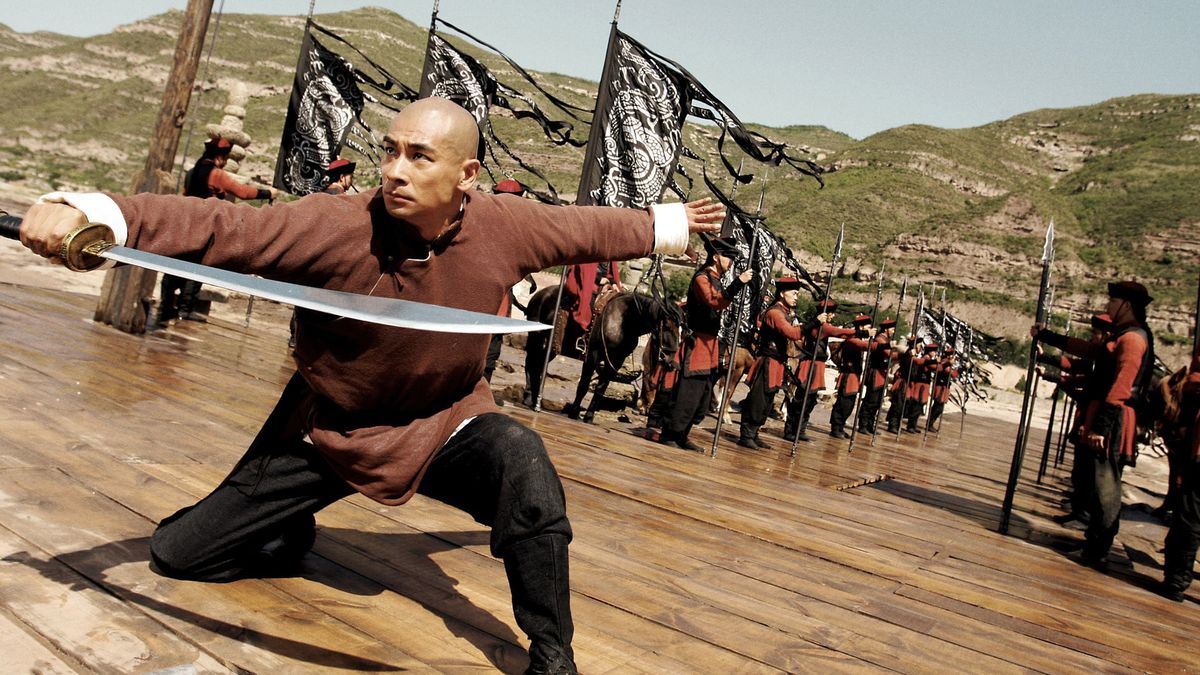 Beggar Su is the old man who trains Wong-Fei Hung (Jackie Chan) in the drunken fist style in the first Drunken Master, not coincidentally also directed by Woo-ping Yuen, so this film acts as a prequel to the Drunken Master films, explaining how Beggar Su came to be a drunk.

The film starts with Su Qi-Er as a successful and respected general alongside his two best friends Ma (Xiaodong Guo) and his blood-brother Yuan Lie (Andy On). After a thrilling rescue of a kidnapped Imperial prince, Yu is offered a position as governor and advised to send the erratic Yuan into exile. Instead, Yu gives his sword to Ma, retires from the army and ensures that Yuan gets the post as governor.

Yu Qi-Er’s problem is that True Legend is not just a prequel to Drunken Master, it is hinted that it is a sequel to Chang Cheh’s Five Deadly Venoms. Yu Qi-Er’s father Su Wan-Kun (Ka-Yan Leung) killed the inventor of the Five Venom style and adopted Yuan Lie and Yuan Ying (Xun Zhou), the venom master’s son and daughter, into his household.

Yu Qi-Er’s hope is that by retiring from the army and allowing Yuan Lie to become governor, he will satiate Yuan’s ambitions, while Su can satisfy his more modest dream of marrying Ying, opening a martial arts school and raising a family. When Yu and Ying’s son is five, the Governor comes to visit and reveals that now that he has mastered his real father’s Five Venom’s style, he has come to claim his revenge and take his sister and nephew away. (It is implied that he has incestuous feelings for his sister.)

The older Yu is killed, the younger Su has his right arm broken and barely gets away with Ying, but the married couple is forced to leave their son behind with his insane uncle.

This is all perfectly conventional down to the reveal that Yuan Lie has created a “perfect” defense to protect himself from Yu’s Kung-Fu, even if the manner of that defense is a little odd: Yuan has had steel plates stitched into his skin!

The normal way that this story goes is that the beaten and injured martial artist retreats, heals up and invents a new technique that will allow him to defeat the “perfect” defense.

This is where True Legend gets a little weird.

While healing his broken arm in a mountain retreat belonging to Doctor Yu (Michelle Yeoh!), Su begins drinking the wine that his wife brews for Doctor Su to earn their keep. His wife finally snaps and tells the drunken Su that he has what he always wanted, two unbeatable opponents, Yuan and Yu himself. While wandering the mountains, Su finds himself two trainers: an old sage and an invincible martial artist who calls himself the God of Wushu.

Ying is at first delighted that Yu has refound his purpose until she realizes that the old sage and the God of Wushu only exist in Yu’s head and that her husband has gone crazy.

What makes True Legend a step above most forgettable Kung-Fu films is the way that legendary director and martial arts choreographer Woo-Ping Yuen seems to be reflecting on the history of martial arts movies and asking whether Kung-Fu is worth the generational cycle of violence that it creates when all that it seems to do is create dead bodies, monsters, and lunatics.

It’s a shame that having reached his epiphany about the corroding danger of Kung-Fu that Woo-Ping Yuen chickens out. The natural narrative ending for True Legend is the final confrontation between Yu and Yuan, between two Kung-Fu masters – both crazy and both poisoning themselves to become even stronger.

Instead, the film continues for another 20 minutes with an ending that feels like it was cobbled together out of leftover material from the Jet Li film Hero. Yu, now firmly a drunken beggar, runs into his old army buddy Ma and the two men confront an evil Russian death match promoter named Anton (David Carradine in his last role!) and Anton’s crew of murderous Russian martial artists.

This is the traditional Kung-Fu ending – to finish with the hero triumphant and to declare the supremacy of Chinese Kung-Fu over all other forms of martial arts. It’s certainly more comfortable for the director and his audience to end the film this way and paper over the uncomfortable duality between the venomously evil Yuan and the crazily drunken Yu. But it’s not the right ending.