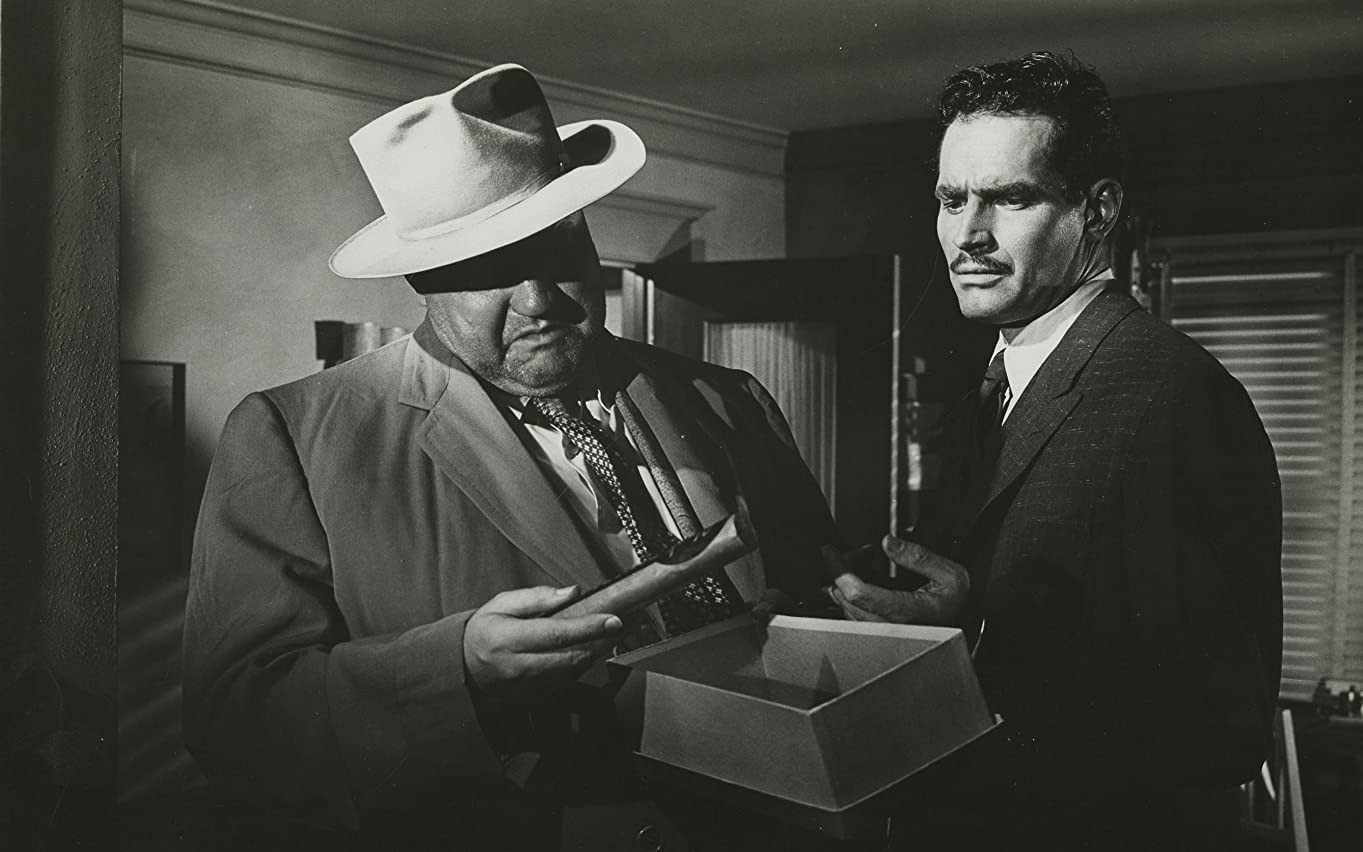 Touted as one of the greatest films of all time, let alone one of the greatest American films of all time, Touch of Evil has had the misfortune of being bastardized by the studio system, in this case, Universal Studios. The studio was far from content with the original cut the director Welles showed them. Certain scenes were re-shot, re-edited, re-whatever you can think of. Welles was most displeased with the fruit of the studio’s efforts and went as far as to write a lengthy memo that included a series of demands. The current article shan’t delve too much into these events given the amount of literature already available on the topic but suffice to say that there are today three different versions of Touch of Evil.

The review shall concentrate its efforts on the1998 restored version which was Universal’s best attempt at respecting the demands made by Orson Welles 30 years earlier (for the record, there is a widely available 2-disc DVD set which offers all 3 versions of the film and the 58-page memo. Sadly), Touch of Evil quickly establishes that the viewer is in the hands of a pro director. The opening 5 minutes or so consist of a single tracking shot which wonderfully sets up all that shall follow. It is visually arresting for all the information it conveys, a real coup de grace of choreography. To put it succinctly, the viewer witnesses a successful assassination attempt on an American couple leaving a Mexican border town. A package of dynamite was hidden in their vehicle and as they drive through the town of Los Robles, the viewer also meets the film’s main protagonists, Miguel Vargas (Charlton Heston) and his wife Susan Vargas (Janet Leigh), as they walk towards the border. The vehicle explodes and Vargas, a federal narcotics detective, is thrust into action. Soon afterward he is partnered with the infamous detective and police captain Hank Quinlan (Orson Welles). Their personalities don’t match at all, with Vargas being the more honourable, trustworthy, and sophisticated of the two, whereas Quinlan is boastful, brash, and doesn’t hide his contempt for a lot of things and people, most notably Mexicans, alas. But the audience learns that while both are highly respected within their jurisdictions, they use mutually exclusive detection methods. Vargas suspects, with reason, that the young Mexican arrested for the assassination was framed by none other than Quinlan and his team of detectives. This begins a dastardly misadventure in which Vargas will try to uncover the truth about Quinlan, as the latter will aim to spoil the former’s reputation and political aspirations with the help of a local Mexican mobster who himself has some interest in seeing Vargas go down in flames.

Where to being with Touch of Evil? For one, it is an excellent piece of filmmaking. There is a host of things fans of this movie and fans of film, in general, can dissect with glee. First and foremost is the story, which by the end feels like a twisted morality tale. Characters, good and bad, either choose or are forced in some way to commit acts and adopt certain strategies that might go against what they stand for and believe in, even though they know full well that those very strategies will assist them in obtaining what they want or, more importantly, doing what is right. The ends justifying the means, so to speak. This pressure is felt most by none other than Vargas, who it is safe to presume is a straightforward and, for the most part, honest man. His demeanour, both while on the job and when spending time with his wife, suggests this. When push comes to shove, and when a possibly innocent young man’s freedom hangs in the balance, even a man such as Vargas is willing to go against the grain, as well as his better instincts. For someone such as Inspector Quinlan, the mindset is entirely different, for he has a reputation that must be preserved, regardless of the methods. A very selfish goal that is justified by any means possible. In fact, it is strongly suggested that the man’s entire reputation rests on dubious standards. Not much of the character’s history is revealed, but we do know that he has a team of colleagues who willingly follow his lead and that he’s one of the most significant and respected law enforcers in the United States. Why he has not been caught up until this point is anybody’s guess, although one may assume he has always hit back at his accusers before proof of wrongdoing was ever found, just as Quinlan is trying to do here against Vargas, but the essential element in all of this is that the story pits these two people, Vargas and Quinlan, against one another. Two personalities, two intellects, and two philosophies on life and work which are diametrically opposed and which cannot co-exist under any conditions.

Another one of the standout elements of the picture is the dialogue. Much like how the film has two very different personalities against one another, Touch of Evil melds two dialogue styles which in the end make it a fascinating experience to say the very least. On the one hand, the tempo feels especially realistic, with various characters talking over one another. There are even a few exchanges that are somewhat difficult to decipher upon initial viewing due to the cacophony of sounds and voices. Other times, the dialogue is mumbled more than anything else, the guilty party being Quinlin, who sounds as if he drunk from start to finish. That being said, many of the lines have a stylish zest to them, very much in the mold of old school film noir, some of the best examples being the retorts Janet Leigh has for some Mexican gangsters early in the story.

In any event, the style added another dimension to the performances, many of which are very good. Orson Welles owns almost any scene he is in, playing a detective whose persona and reputation not only precede him but encourages him in his nasty behaviour and habits. Welles wasn’t merely a great director, the man was a great actor too. Obviously he was a significant physical presence when stepping into the room (both for his personality and physically) and with that comes an imposing attitude. A stare, a sneer, a barked order, a mischievous chuckle, the character of Hank Quinlan is a formidable opponent for the straight man Vargas. That is not to say Heston fails to present an adequate counterweight to Welles. Heston plays the part well, blending nobility and strength of character for his determination, but Welles’ villain is a far more fascinating creation and thus more memorable actor of the two. Of particular note is his reaction when facing accusations of having framed the young construction worker blamed for the murder. The audience knows perfectly well this is true, but Quinlan reacts with remarkable believability. The impression is given that perhaps inspector Quinlan now believes in his own mythology. He knows that he and his close colleagues avoid playing by the rules, but provided that the wrong people do not discover this and bring the information to light, then the myth can live on. It is authentic for enough people for Hank Quinlan to take it seriously, and therefore an attack on his credentials is a genuine insult. If enough people see it as a legitimate attack on a stellar career of detective work, then by golly he’ll act like it is a legitimate attack.

Janet Leigh is particularly strong here as the American wife Susan. Vargas. From very early goings she is unwillingly thrust into a whole mess of an affair with a Mexican mob that has a beef with her husband. She possesses a real tough attitude when faced with danger and doesn’t scare easily unless vastly outnumbered. Leigh’s versatility as an actress is what impresses above all else. Her character is put through a lot in Touch of Evil and Leigh rises to the occasion. It is all too easy to forget the female performance in films such as this one where the two male leads are such important figures in cinema history (in addition to actually giving good performances themselves), but Janet Leigh is unmistakably charismatic in her performance.

If the Friday Film Noir column could be turned into a book, an entire chapter would be dedicated to Touch of Evil. The current review has already touched on the phenomenal opening scene, the psychology of its two main characters and how that influences the story, as well as the performances yet the cinematography and editing have not even been mentioned up until now. They both are adventurous and truly help set the tone with some terrific dutch angles and a sublime mastery of how to get the most out of light and shadow during nighttime scenes. The film is a masterclass of the noir genre.