The familiar elements of the superhero genre were codified through Superman in 1938’s Action Comics #1, and owing to the state of American and Russian relations after World War II, Russian characters in American comic books were usually villainous caricatures, like the Red Ghost and the Abomination, or didn’t even get a name as they were punched out by lantern-jawed American superheroes. Many of the Marvel Comics of the 1960s read like anti-Communist propaganda, with the Fantastic Four initially getting powers when they tried to “beat the reds into space,” and Iron Man dealing with a multitude of “red” saboteur plots in his early stories. Even the teenage hero Spider-Man ran into the Soviet-backed villains Rhino, Chameleon, and Kraven the Hunter while protecting Queens, going to high school, and figuring which attractive woman to date.

However, despite a large number of villains from Russia and countries that were previously part of the Soviet Union, Marvel and DC Comics, along with some independent companies, have also created a variety of Russian superheroes that are beloved by fans around the world, some of whom have even received their own solo comics.

In order of first appearance from most recent to oldest, here are the ten most interesting Russian superheroes that have appeared in comic books, live-action film, and animation.

The first superhero on this list is Black Lightning. He’s not the DC Comics hero who recently booked a show on the CW, but an original creation of Russian filmmakers Alexandr Voitinsky and Dimitry Kseliov, as well as Kazakhstani film producer Timbur Bekmambetov, who directed the comic book film Wanted, Abraham Lincoln: Vampire Hunter, and the 2016 Ben Hur remake.

The story of Black Lightning is like if Peter Parker lived in Moscow instead of Queens and got an old car from a father figure instead of getting bit by a spider. It follows the life and adventures of an ordinary college student named Dima Maykov, a guy whose main goal in life is to date his pretty, blonde classmate Nastya. While delivering flowers, he finds out that his dad’s old clunker can fly, having been part of a top secret Soviet research and development project. Having a flying car means that Dima can make more money on his deliveries as well as impress girls, but he ignores his father getting stabbed in a similar manner to Spider-Man not stopping the robber that killed his Uncle Ben. This guilt leads to him being a superhero named Black Lightning (based on the speed and color of his car), and he ends up in a battle royale against the mad scientist Viktor Kuptsov, who has souped up his Mercedes in a similar manner to Dima’s Volga.

Black Lightning indulges in all manner of superhero tropes, including ingenious supervillain plans, secret lairs, big romantic kisses, and a final battle outside of Earth’s atmosphere. It shows that the selflessness and over-the-top nature of superheroes can appeal to movie viewers all over the world. Another Russian superhero film named Guardians that features a giant buff bear was released in February 2017, and the genre shows no sign of dying in that country. 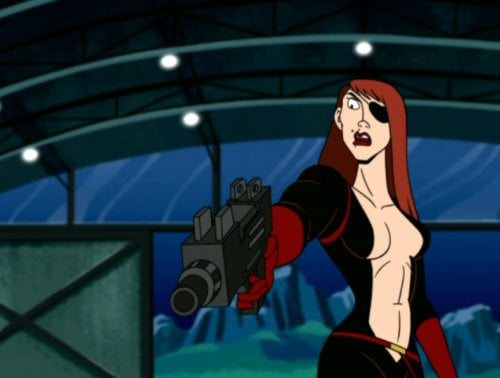 Along with the classic Hanna Barbera cartoon Jonny Quest, superhero comics are one of the biggest influences on the popular, long-running Adult Swim cartoon The Venture Bros. One of the show’s supporting characters is Molotov Cocktease, a Russian assassin and longtime enemy/love interest of Brock Samson, who is the bodyguard of its protagonist, Dr. Venture. Molotov Cocktease is like if the Marvel comics antiheroes Black Widow and Silver Sable had a deranged love child who wore a chastity belt.

Molotov Cocktease and Brock Samson have a love/hate relationship that goes all the way back to their time as young agents in the Cold War, when Brock killed her father while undercover during the 1986 Goodwill Games. They even once saw a Led Zeppelin laser show in Akron, Ohio. In later seasons, Molotov Cocktease has a more antagonistic relationship towards Brock, and creates a mercenary team called the Black Hearts Mercenary Group to urge Brock to kill his OSI teammates and leave the group (except she was working for OSI all along to root out moles in the organization in deep cover, much like her inspiration Black Widow has done in various Marvel Comics).

Molotov Cocktease is a hilarious parody of Cold War femme fatale spies, and she also has quite the twisting and turning arc in The Venture Bros. She’s also a big fan of sweatpants when she’s not killing men with her bare hands in dresses that plunge down to her navel. 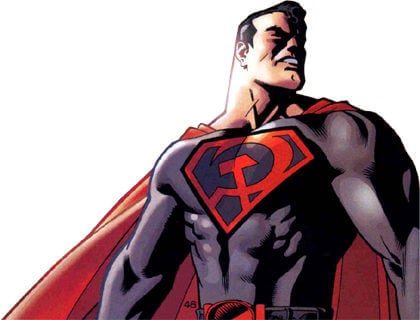 What if Superman’s spaceship had landed in Soviet Russia instead of the United States? The 2003 Elseworlds miniseries Superman: Red Son by Mark Millar and Dave Johnson sought to answer this question in epic, decades-spanning fashion, with guest appearances from all of DC Comics’ biggest stars. The story follows Superman’s rise to power from a young boy living on a Ukrainian collective farm to being a propaganda symbol for Joseph Stalin’s regime, and later becoming a dictator in his own right after Pyotr Roslov (Earth 30’s version of Superman’s childhood friend Pete Ross) assassinates Stalin. By 2000 the Soviet Union has taken control of the world and ended disease and war through the use of a special brain surgery to make humans compliant to Superman’s rule.

There is always resistance, however, as the scientist (and later president of the United States) Lex Luthor constantly tries to topple Superman’s regime by creating a clone of him named Bizarro who sacrifices himself. There is also Brainiac, a Deep Blue-type program that uses its high-powered computing system to find a way to beat the Comrade of Steel that leads to even more collateral damage, like injuries to Superman’s ally Wonder Woman, and the shrinking of Stalingrad (in a nod to the Bottle City of Kandor). Brainiac keeps switching sides and being used as an instant disaster starter until Superman finally detonates him in space.

Millar and Johnson show that even though Superman has been indoctrinated into an authoritarian regime, there is still some good in him, as he stops invading the United States when Lois Lane-Luthor leaves him a letter asking “Why don’t you put the entire world in a bottle…?” Towards the end of Red Son he just decides to pull a Dr. Manhattan and chill out in space, returning 2,000 years later for the funeral of Lex Luthor, who has set up his own world dictatorship while also curing all diseases and setting up colonies on other planets.

After all the violence and brainwashing of the Earth-30 Superman, it is hard to see him as a traditionally heroic figure, but nevertheless, Superman: Red Son is a thought-provoking alternate history comic. There is also a lot of him in Henry Cavill’s take on Superman in Man of Steel and Batman v Superman (Red Son is one of the actor’s favorite comics), and also in the tyrant Superman of the Injustice video games, who even has less of a conscience. 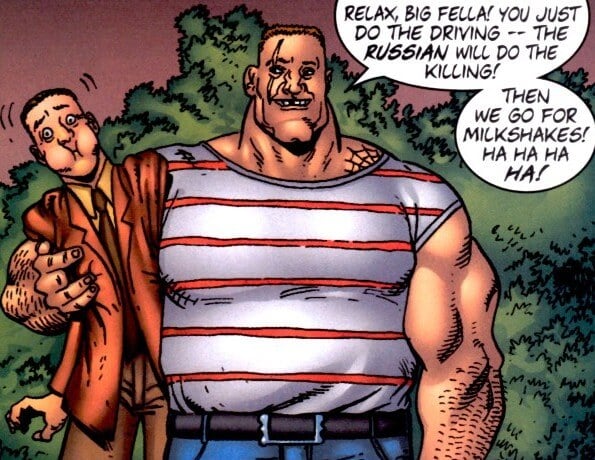 The Russian isn’t a superhero in any shape or form, but he’s on this list because of sheer badassery, and the fact that he is the only memorable part of the 2004 Punisher film starring Thomas Jane. Also, the existence of his character makes me crack up. He is 7’2″ and weighs a whopping 572 pounds; the Russian once ate a man in Belfast, Northern Ireland on a dare, and can literally kill you with hugs. In his first appearance, he is hired by crime boss Ma Gnucci to ice The Punisher, who has been a real pain in the ass for her, taking out basically all her lieutenants and soldiers throughout The Punisher series.

Over the course of an entire comic book issue, The Russian beats the crap out of Frank Castle while blabbing non-stop about how he loves American superheroes like Daredevil, Spider-Man, the X-Men, and Thor, and wants to spend his entire bounty on Levi jeans and CDs. Garth Ennis (Preacher) is known for his hatred of superheroes, so The Russian is the summation of everything he finds annoying in one humongous henchman-sized package. The Punisher finally defeats him in an extremely creative way, burning him with pizza hot out of the oven of his slovenly neighbor Bumpo (although the Russian comes back as a three hearted cyborg in the next Punisher volume, and it takes a whole hydrogen bomb to take him out).

The Russian is one of multiple over-the-top characters created by roguish Irish comics writer Ennis that includes Arseface, Sixpack, and Dogwelder (from DC Comics’ Hitman), and the various parodies of superheroes in his darkly comedic Dynamite series The Boys. The late artist Steve Dillon uses The Russian’s larger than life stature and his propensity for violence to create some darkly hilarious moments. The humor got lost in an overly serious adaptation with former WWE star Kevin Nash’s The Russian in The Punisher film just being a big lump, but it’s nice to see the undersized (for once) Jane also take him out with something hot (nothing is funnier than getting killed with pizza, though). 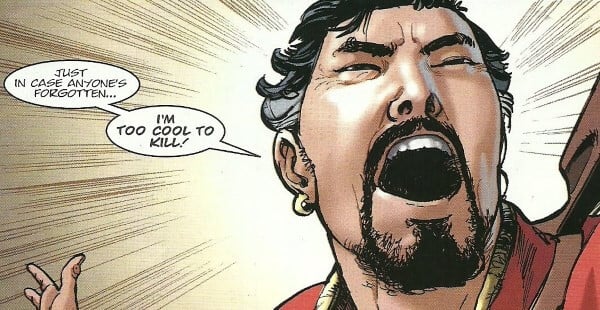 Along with Judge Dredd, Rogue Trooper, Johnny Alpha, and a host of others, the con-man turned superpowered adventurer Nikolai Dante was one of the great characters who starred in the long-running British sci-fi comics magazine 2000 AD.  Writer Robbie Morrison (Twelfth Doctor) and artist Simon Fraser (Judge Dredd) gave him the catchphrase “I’m too cool to kill,” and he lived up to this boast as he flipped and flopped allegiances between the various ruling houses of 27th century Russia (the Romanovs are still a thing) while also working as a pirate and thief.

Nikolai Dante has a dark origin, growing up the son of the pirate queen Katarina Dante, who was raped by Dmitri Romanov, a rival to the current leader of Russia, Vladimir Makarov. His Romanov heritage allowed him to use a Romanov weapon crest, a piece of special tech that gave him a bit of a healing factor and special “bio-blades” to hack his enemies to pieces. In a Russian sci-fi version of Romeo and Juliet, Nikolai ends up falling for Jena Makarov, the daughter of Vladimir, and he helps her depose her tyrannical father before being caught up in yet another war against Dmitri, who has possessed the body of his son Arkady.

In his travels and struggles, Nikolai Dante never really finds peace (he even misses his wedding to Jena when he gets caught up in a game of Russian Roulette with Vladimir in the final installment of the series in 2012). But there’s a lot of sex, violence, and general epic-ness along the way, as Nikolai Dante is definitely the coolest Russian comic book character, and was rewarded with the 2002 Eagle Award (British Eisner) for Best Character. Hopefully, he’ll return soon, or at least get picked up for a TV show or film.