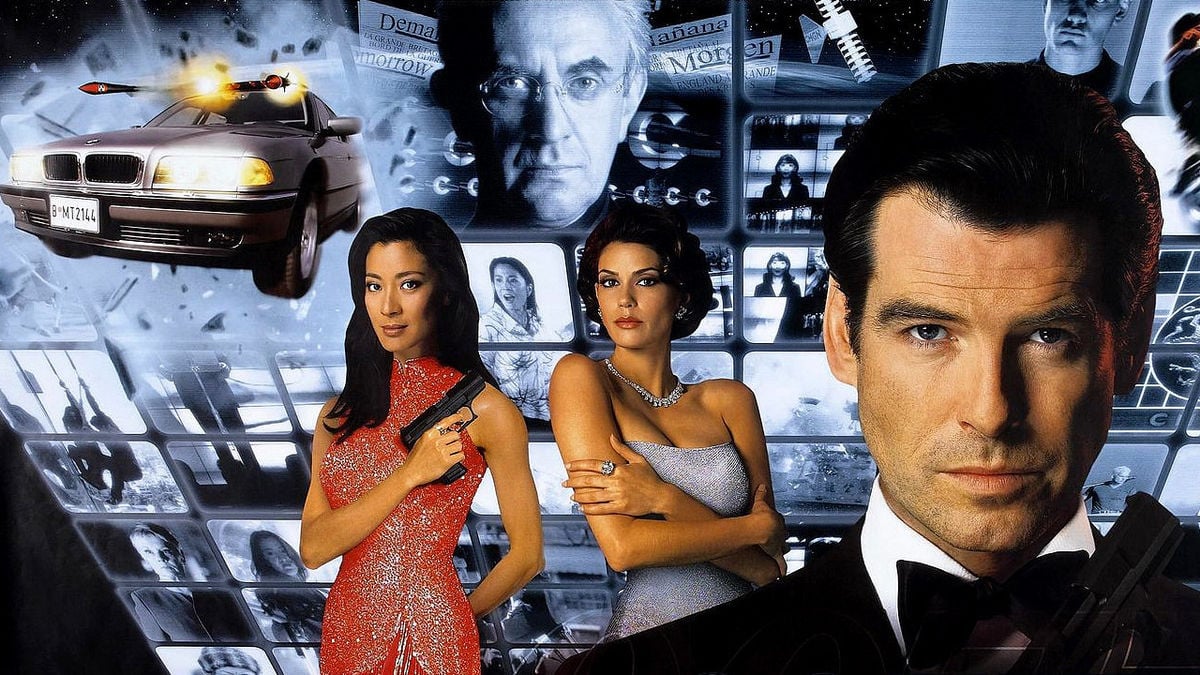 Goldeneye may have been the first Bond made in the ’90s, but Tomorrow Never Dies is the first ’90s Bond. Finally liberated from the remnants of the Cold War, the Bond era entered the global media age where moguls are the madmen and manipulation is more powerful than money. In many ways, it’s an era that the character and the world have been unable to deny in this modern age, but one in which the series has adapted admirably.

The second outing for Pierce Brosnan’s 007 finds him ensnared by a former flame, Terri Hatcher’s Paris Carver; the trophy wife to Elliot Carver, Jonathan Pryce’s arrogant, Rupert Murdoch like-tycoon. Brosnan drops the inner turmoil of Goldeneye and makes his 007 lighter than air, a walking suit who has fun with his gadgets and more fun with the ladies, but who never loses sight of his mission. As for his ladies, TV actress Hatcher is unable to equip herself against the big bright lights of Hollywood and comes off as nothing more than flavour of the month casting. It’s Michelle Yeoh, as Chinese agent Wei Lin, who is her opposite in every way: capable, vibrant, and unpredictable.

The ever-expanding global social sphere has made Bond not just more international over the years but more internationally friendly. The addition of the stoic and graceful Yeoh against Brosnan’s devil may care 007 creates an equilibrium between the film’s timely yet pulpy offerings. Wei is better than Brosnan at the punches and kicks, though not as skilled at the aggressive wordplay. In the film’s most exhilarating set-piece, the two end up handcuffed together and must escape their pursuers via some strategic placement on a motorbike. The action in the 18th Bond is quick cut but nimble, providing the requisite jolt for a blockbuster of high caliber efficiency.

Director Roger Spottiswoode brings a workmanlike if handsome feel to the picture, never straying far from the modern Bond formula. Before Casino Royale, Bond was always a franchise built and often strengthened by tradition. There is a comforting sense of predictability in the way that the Brosnan Bonds, most notably this one, set up the set pieces to knock them down. Each plot twist, wry quip, and blaring horn on the soundtrack is merely a means to an end: uncovering the plot, foiling it, and getting the girl. Along the way are the goodies, and this film seems to take particular delight in winking at its technological tie-ins, notably a car that can be controlled via remote control (in the backseat, no less) and the omnipotence of the global information age (which means, really big TV screens).

This also marks the first film for composer David Arnold, who, much like Brosnan, finds the archetypal beats of the character and the franchise. His jazzy strings and big cues match the film’s scale like a well-tailored suit. It’s a post-modern Bond update with roots in John Barry’s glory days and provides one of the most memorable climactic suites of the series.

The plot (or rather the set-piece engine) may be the least compelling aspect of Tomorrow Never Dies, though its components are no less amusing. Carver snivels his way through a scheme to secure his global media empire by acquiring broadcasting rights in China, where a renegade general is his conspirator. In order to do this, he must gen up World War III between Britain and China. Quoting William Randolph Hearst (“You provide the pictures, I’ll provide the war”), Pryce proves Carver’s consistently cunning hand, even if he is no physical match for Bond. That comes in the form of Stamper, a hulking blond piece of Eurotrash who carries out Carver’s dirty work. Together, these two make up the double whammy for our hero: a villain with a brain, and a villain with brawn. It’s the double-sided threat that is always the greatest challenge for any super-spy and Tomorrow Never Dies relishes in both climactic confrontations, which take place on a satellite submarine, because this being a Bond picture, it can only end on a big piece of machinery.

Though it is not a thinking man’s action film, Brosnan is a thinking man’s Bond. He creeps around corners with a sense of objective and a lethal efficiency–almost entitlement–to what he is doing. Bond is supposed to win and Brosnan relishes this, providing ever-so-knowing poses and grins for the camera. He is an actor being watched by an audience just as he is a character being watched by a global tycoon hellbent on world domination. The man might as well look good doing it.

Licence to Kill Remains in the Top Tier of Bond Movies

Shane Ramirez is a professional actor and videographer, as well as a budding filmmaker and novelist residing in San Marcos, TX. A life-long film enthusiast, Shane has written for everyonesacritic.net and examiner.com, and has produced his own short films. He is versed in the arts of cinematography, photography, and editing. His favorite directors are Andrei Tarkovsky, Terrence Malick, Christopher Nolan, Michelangelo Antonioni and Krzysztof Kieslowski. Contact Shane at ramirezs316@gmail.com.