They say that success breeds imitation, and you’d be hard-pressed to find a film series more successful – and imitated – than Star Wars. After the smash success of George Lucas’ epic space opera in 1977, producers were all too eager to jump on the bandwagon and start churning out swashbuckling space adventures in an effort to ride on Star Wars’ coattails. The results weren’t always pretty, but they were frequently fun, in an extensively kitschy way. Given that it’s Space Opera month here at Goombastomp, Tom Watches Movies is devoting the month of April to a look back at some of the many, many off-brand Star Wars-alikes in a series we’ll be calling

These Aren’t the Films You’re Looking For

Imagine a movie where Han Solo lands on Earth circa the post-apocalyptic nightmare of Mad Max. Now crank the budget down a bit (or actually a lot) and fill it with semi-recognizable actors; the picture you have in your head probably isn’t too far off from Spacehunter: Adventures in the Forbidden Zone, a 1983 sci-fi adventure movie that may not be a direct ripoff of Star Wars, but definitely borrows some familiar notes.

Peter Strauss stars as Wolff, a Han Solo-style space adventurer on a mission to rescue three women stranded on a hostile planet after their space cruise ship goes down. The three eventually fall into the clutches of the villainous Overdog, a brutal dictator who looks like Lon Chaney as the Phantom of the Opera, but with giant metal claws. To rescue them, Wolff teams up with Niki, a local scavenger, and Washington, his old military buddy.

Spacehunter has a lot more in common with post-apocalyptic barbarian movies than space operas if we’re being honest, but it gets a pass for being about as fun as B-grade sci-fi from this era can be. Not that it’s an entirely devoid of name recognition, mind you; the film was produced by Ivan Reitman, just a year before he would direct Ghostbusters, and if you’re a fan of that classic, look forward to some familiar faces. Ernie Hudson, as charming as ever, appears as Washington, and Harold Ramis makes a voice cameo early in the film. Meanwhile, Molly Ringwald, a year away from Sixteen Candles, plays Niki, and Michael Ironside gets squeezed into the metal harness of Overdog. Colin Mochrie also has a blink-and-you’ll-miss-it appearance as a guard. Ghostbusters composer Elmer Bernstein provides the soundtrack, and you may recognize the odd theremin note here and there in between rousing classical themes.

In many ways, however, the real star is the art direction. Though the film is mostly in gritty, grimy, cobbled-together Road Warrior mode, there’s little hints of what the more polished side of this particular universe looks like. The space cruise liner from the opening scene, as well as some other incidental costumes and sets, have a very striking style that hints at a certain Frank Frazetta or Moebious aesthetic. There are also lots of sweeping, flowing designs that look less like they were built and more like they were moulded. Unfortunately, we only see sparing glimpses of this look, since the majority of the movie takes place in the grittier end of things.

That isn’t to say there aren’t a lot of fun visuals in the film’s majority aesthetic; one of the first things Wolff encounters on his adventure is a wind-driven ship on rails under attack by hang glider bandits, which is as gloriously goofy and spectacular a visual as it sounds. Overall, Spacehunter probably had a higher budget than you’d expect, boasting some rather large sets and quite a few pyrotechnic effects. (with very lax safety requirements, by the looks of things – if one or two extras didn’t lose their eyebrows over the course of filming, it would be a real surprise).

From a plotting perspective, the film resembles the patchwork vehicles and sets that dominate its look more than the elegant designs we only see glimpses of. Spacehunter at times feels more like a safari than a cohesive narrative, as the first couple of acts are mostly “Wolff and Niki go here, encounter some form of monster or mutant, make a narrow escape, and repeat.” This is all fun, especially since many of the creatures and baddies are well designed and realized, but you could easily cut the film down by forty minutes at least and not make any major change to the actual plot.

Spacehunter: Adventures in the Forbidden Zone is the kind of low-rent but quite charming filmmaking that movies like Manborg and Turbo Kid are calling back to, with variable success. It’s excessively rough around the edges, but with an infectious charm that no doubt comes from the abundance of talented people who worked on it. It’s also not as blatantly derivative as some of the films we’ll be looking at later, which ends up counting for a lot. 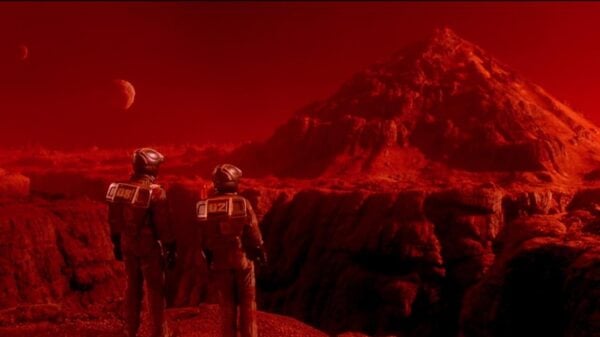 ‘Total Recall’ – A Blockbuster from Another Era

30 Years Later: Total Recall Based on a Philip K. Dick short story (We Can Remember It for You Wholesale), Total Recall is set in a...