There’s probably a way to make a story about the ghost from Ringu fighting the ghost from Ju-On work as a horror film — perhaps something about the frightening prospect of being caught in the middle of a war between two entirely unknowable entities, unable to do anything but look on as two forces beyond your ken battle it out over the right to devour your very soul. There’s a lot of fertile scary territory to be found in the idea of powerlessness, and what’s more dis-empowering than being reduced to a prize? Unfortunately, Sadako vs Kayako doesn’t quite seem willing or able to exploit this angle. All right, on to plan B, then: forget about making this a horror film and instead turn it into a more action-oriented monster movie full of paranormal throwdowns for the ages — like a Godzilla movie, but substitute dead Japanese children for giant monsters. But again, this doesn’t seem to be the route this film wants to take. So what, then, is the game plan? By the time the credits roll, it’s abundantly clear: there never was one.

Sadako vs Kayako is a film that spends much of its runtime flirting with ideas, approaches, and angles, but never really commits to any of them. The end result is a movie rife with concepts that still winds up teaspoon-shallow, despite its best efforts. That shallowness need not have worked against this film, had it been willing to just embrace the silliness of its premise and go full camp, but unfortunately that isn’t the case, as the fimmakers were either brave or foolhardy enough to try to portray this story in complete seriousness.

Sadako vs Kayako plays out like two bite-sized Ringu and Ju-On movies cut together that cross over in the final act. On one side of the story, two high school girls find Sadako’s VHS, and one of them comes under its curse after watching it. Meanwhile another girl moves in next to the house from Ju-On, soon falling under its own curse. The girls on the Ringu side of things come in contact with an exorcist who comes up with a plan to destroy Sadako once and for all: pit her against another evil spirit (guess which one) and have the two destroy each other. thus, the two “halves” of the story are brought together in the last half hour or so, finally allowing the film to live up to its title.

This would be a decent enough approach, but the film’s first problem is that it fails to balance the two sides. Yuri and Natsumi, the two girls who find Sadako, feel considerably more fleshed out than their Ju-On counterpart, Suzuka. We spend a great deal more time with them, and even when the film is ostensibly focused on Ju-On‘s ghosts, Suzuka is only around some of the time. Not that Yuri and Natsumi are the most interesting or nuanced characters to begin with, mind, but you never get a sense of Suzuka as anything other than a scared face and a haircut, and ultimately she feels like dead weight in the narrative.

But more than this imbalance, Sadako vs Kayako‘s biggest failing is how it spends almost its entire runtime tossing out potentially interesting ideas then doing absolutely nothing with them. Early on, Yuri and Natsumi bring Sadako’s tape to their folklorist university professor, who seems to have some kind of obsession with Sadako. How deep his obsession goes or where it comes from seems like it’s being set up as a big revelation, but not so much. Likewise, he makes a DVD copy of the tape, which brings up all sorts of questions. Are there two Sadakos now? Does she migrate from the tape to the DVD? Later on, the footage is even uploaded to the internet, seemingly implying that the film will see the curse going global a la Pulse. But again, no. Sadako vs Kayako feels positively bursting with possibility, ideas that could potentially take either of the franchises in new and interesting directions, but after introducing these concepts, the film seemingly loses interest and simply moves on to something else. The most egregious example comes around a minute before the film ends, setting up what could be a fun (if completely bizarre) new threat for the protagonists to overcome in the final act……and then it abruptly cuts to credits. 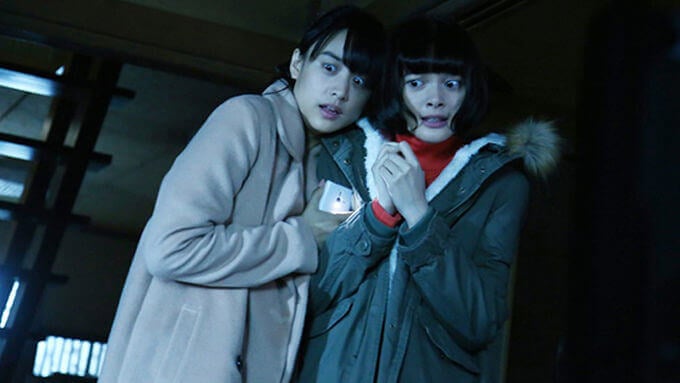 What we have here is a film that doesn’t know what to do with itself, unwilling to totally give in to the silliness of its base premise, instead playing itself straight. But rather than come up with a way to make that premise at least compelling, or a new angle from which to tackle either or both franchises, Sadako vs Kayako just throws ideas and concepts around without committing. The promised showdown is also forestalled as long as possible, keeping the two worlds of each franchise at arms length until late. It isn’t so much Ringu vs Ju-On as Ringu -and- Ju-On, and fairly rote and expected versions of each at that. If you’ve seen any iteration of each of these franchises, you won’t see anything new here. A naked Japanese child will suddenly be in the shot, screeching like a cat and jumping around like Spider-Man, or otherwise lurching towards the hapless high school girl du jour; the same basic bag of tricks that either franchise has relied upon previously gets brought out again and again, to diminishing effect.

It isn’t exactly clear who exactly asked for Sadako vs Kayako to exist, but it’s hard to see it satisfying anyone. Fans of horror and J-Horror won’t find anything new or original, or at least nothing that the film seems all that interesting in exploring or developing, and people here purely for the insane spectacle of two Japanese horror monsters fighting it out will be bored when that fight doesn’t happen until the very end. Sadako vs Kayako is one of those movies that doesn’t feel like it has much reason to exist, though its proponents will probably answer that with something along the lines of “why not?” But that’s rarely a good reason, and isn’t one here.