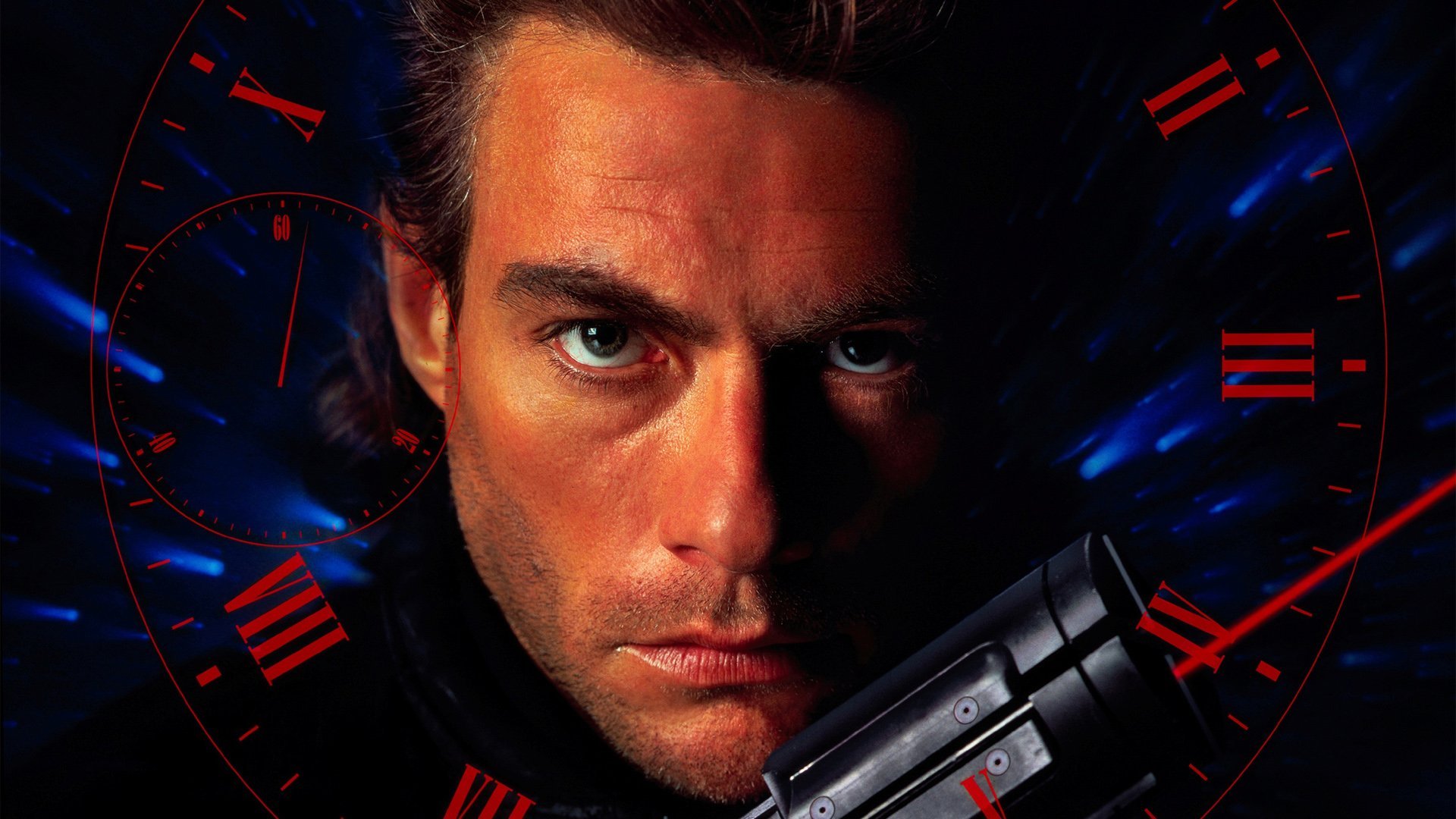 In 1994, on the day Washington police detective Max Walker (Jean-Claude Van Damme) is about to accept a new position as a member of a secretive police squad that will employ time travel in order to stop criminals that have already set foot in the past to commit various illegal activities, his wife Melissa (Mia Sara) is brutally murdered by unknown thugs. Flash forward ten years later in 2004, and Walker is a seasoned member of the TEC, the Time Enforcement Commission, a police division managed by Eugene Matuzak (Bruce McGill). A mission to the early 1930s leads Max to believe that current presidential hopeful Senator Aaron McComb (Ron Silver) is using time travel to his own nefarious benefit, a plot that just might have even played a role in his wife’s demise.

Jean-Claude Van Damme is an action icon whose star rose very early in his career. (Bloodsport being the film that put him on the map). He is still very much involved in movie making, his most recent major role as the antagonist in the second Expendables film in 2012. Often derided for his wooden acting (and his accent, although that has never felt like a fair criticism), his movies have, for the majority, been hits, regardless of their dubious quality at times. Timecop represents something of a highlight in his filmography. Based on a Dark Horse comic series with a legitimately interesting premise, it is directed by Peter Hyams and is boosted by a solid script, notwithstanding the typical criticisms one can lambast at how most films deal with the nebulous concept of time travel. Hyams himself is not exactly a household name, but any director that is willing to take on the sequel to 2001: A Space Odyssey (2010, aka The Year We Made Contact) is a man willing to take risks and quite confident in his abilities to deliver the goods.

Put succinctly, Timecop is not only Van Damme’s best film, but it is also a good film, period. Yes, time travel is a slippery slope for screenwriters and directors to ride on and there are definitely a couple of moments in the movie that might have some viewers scratching and spark pertinent questions, yet it should be argued that dramatically, yes, dramatically, Hyams’ picture works rather well. Max Walker is a man condemned to live with the brutal question ‘what if?’. What if the past could be changed and his wife rescued from the clutches of the villains that mercilessly took her away from him? That is the riskiest of propositions, however, as it is revealed, not for the first time in film, that changing the past alters the course of the future, sometimes for the better and sometimes for the worse. The movie plays on this notion very effectively, as every time Walker ventures into the past to continue his assignment, something history-altering occurs, thus awarding the slimy Senator McComb (played with devilish glee by Ron Silver) with the upper hand as he makes his way towards the presidency.

Timecop is Still the Apex of Van Damme’s Career

Timecop is also a great vehicle for Van Damme to flex his legendary muscles, to say nothing of the iconic moment when he evades a projectile in his kitchen by jumping and performing the split with his two feet resting on opposite counters. It is a great moment in a great action scene, firmly placing Van Damme in the upper echelon of action stars in the 1990s. Better still, the action is varied, with a nice mixture of intense gun fighting and impressive stunts, giving hungry audiences a little bit of everything. The hand-to-hand combats themselves refuse to hold back, the filmmakers ensuring that each blow looks and sounds as though it hurts like hell.

The biggest and most surprising compliment the film earns, however, is Van Damme’s decent performance. For the first time in his career, he looks comfortable leading a film not just with his fists, but with dialogue and character as well. Lest anyone gets carried away, this performance is by no means the stuff of legend, yet considering how terribly wooden, downright uncomfortable he looks in most of his films prior to Timecop, the man should get some credit where credit is due. He is, for all intents and purposes, believable as a charismatic cop haunted by the tragedy of a decade ago and determined to succeed in his mission to thwart the duplicitous Aaron McComb. With the arrival of the opportunity to actually visit the night that torments him still and change the outcome, the sense of genuine desperation comes through. Van Damme was not a very good actor before Timecop and rarely gave as good of performance since, making Timecop an anomaly, albeit in the best possible sense.

When all is said and done, it is hard to argue that the movie does not represent the high point of its star’s career. From the story to the action and even the Belgian’s acting, Timecop commits few false moves, proving beyond merely competent, but actually quite good. It won’t be argued very often with respect to his filmography, but this is a must-see Van Damme.

‘Zhong Kui: Snow Girl And The Dark Crystal’ Attempts to Rival the Best that Hollywood has to Offer

Bloodsport Aims to Kill Two Birds With One Stone