Sparing in almost every regard, the one thing that stands out in The Standoff at Sparrow Creek is how effectively it uses dialogue to convey every aspect of its narrative and thematic intent. Utilizing James Badge Dale as a former-cop-turned-militia-member, first-time director Henry Dunham evokes Reservoir Dogs while exploring the thin line between truth and survival — and how the two vary in necessity to each other.

After hearing gunshots nearby, Gannon (Dale) hurries to a militia safehouse where he and the rest of the crew assemble to figure out what has happened. When an AR-15 is missing from their armory — the exact type of gun police channels reported as being used — the clock is ticking to find out who among them carried out a mass shooting. With a couple different characters to latch onto, Dunham surprisingly only gives a handful of them a fair shake (to great effect), as Gannon interrogates the two people suspected of carrying out the attack.

Dunham uses Gannon to examine the mind of two specific individuals you can sometimes find at the heart of a mass shooting: a man seeking revenge on the cops that wronged his family, and a young adult ready to lash out at the world. Whether these two are innocent or guilty is almost besides the point. The Standoff at Sparrow Creek is more about the ways we can convince ourselves to be guilty, whether for selfish or selfless reasons. Gannon is there to do one thing: obtain a confession that gets the militia out of trouble. Things only go awry when further police chatter on the police scanner reveal details about the assault that complicate matters. 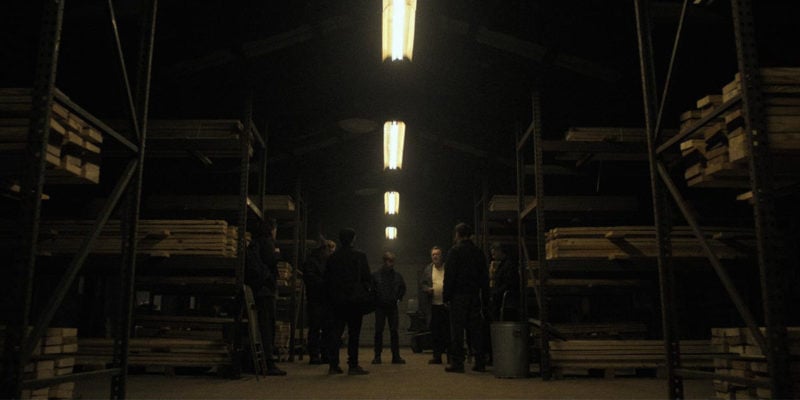 There’s an intensity to Dale’s performance that isn’t immediately wholly felt. As tensions rise, it becomes increasingly clear why Gannon is so good at interrogations, but also why it matters to him that he finds out who committed the attack — and time is not on anyone’s side, either. All of this feels palpably on Gannon’s shoulders, so that by the time the movie is ready to finally release its tension, things become more and more satisfying.

However, many will find issues with the lack of standout characters. This is clearly Dunham exploring archetypes and the usual suspects of a mass shooting; he’s not out there mining for new and interesting people. Instead, he just lets the actors try to find new ways to present the archetypal shooter. They all go for it, but it lands back on Dale’s performance to keep things together.

The Standoff at Sparrow Creek is about its dialogue more than anything. It doesn’t break the mold, and it doesn’t feel overly ambitious. It’s just a standard movie about people with their backs against the wall, and one man trying to keep the last vestiges of family together. In this case, his family is a bunch of gun-toting, profanity-slurring militiamen, and it makes for an entertaining ride that feels perfectly calibrated to bring audiences to the edge of their seats.