If Green Room was Jeremy Saulnier’s hardcore punk rock movie, Hold the Dark is his atmospheric black metal film. Filling each scene with cold, wintry images and characters that prefer to communicate with their actions, this is a different, more meditative beast than Saulnier’s previous films. Let the atmosphere sink in and you’ll find a calm, assured film that embraces evil’s necessity.

An author named Russell Core (Jeffrey Wright) who spent time with wolves in the wilderness is hired by the mother of a missing child to find the wolves that she believes took her son, and hopefully bring him back alive after killing the wolf that did it. Things become complicated when word comes out that the mother, Medora (Riley Keough), has disappeared ,and her husband, Vernon (Alexander Skarsgard), has been sent home early from the war in Iraq. As the plot starts to twist and contort (the screenplay is written by frequent Saulnier collaborator Macon Blair), it eventually situates itself in a place where nothing good can happen. Like a blocked artery, Hold the Dark ties off the narrative for its final half, and lets the body count rise while the mood becomes increasingly grim.

There to keep the peace in the Alaskan village is Donald (James Badge Dale), a police officer that has struggled to help the families of other missing children in the village. He’s a man of action, but his actions have not seen any results, leading many to resent the police force. Donald and Russell both want to help Medora and Vernon find their child, but when things become complicated, the two are forced into a game of survival. Here is where Saulnier’s incredible ability to create tension shines brightest amidst the darkness of the situation. There’s always some semblance of hope and optimism, but it diminishes as the situation becomes increasingly dire, until the only hope that’s left is a fragment of what it used to be. 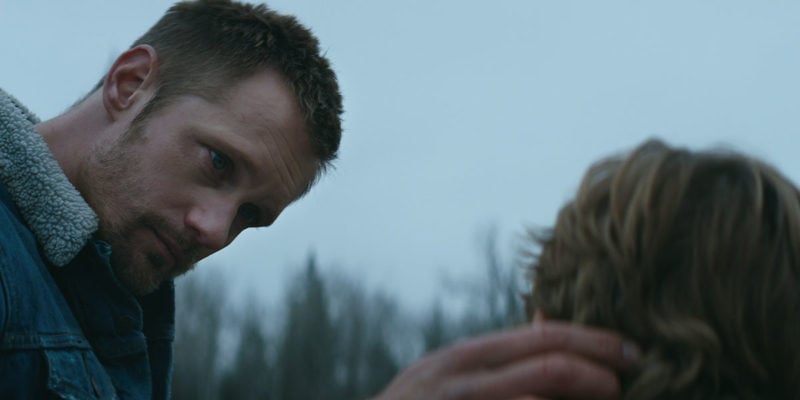 Saulnier is actually surprisingly sparing when people die. There are long stretches of conversations between characters that feel just as compelling as the few action scenes throughout. Honestly, Hold the Dark reminds me a lot of Wind River in how grim it often feels, but unlike Taylor Sheridan’s film (which seems to be fighting darkness), this one embraces it as a way of life for some. Wolves, and how they behave, becomes a constant metaphor throughout as Russell tries to unravel the mysteries at the core of this village.

Hold the Dark is a staggering achievement in setting a mood

The exploration of evil and its merit is what the majority of Hold the Dark seems centered around. Even Russell himself takes umbrage with Sherriff Donald’s claim that they’re investigating humans, not animals. The way the movie ends also feels like a continuation of this idea. It also helps that a lot of the mythology and spiritual imagery is rooted in nature and the animals inhabiting the Alaska landscape. Creepy tribal masks, heavily wooded areas, an isolated village, and the ever-present night sky all bring together this idea that humanity isn’t as different from animals as we may believe. Some just choose to embrace it more. 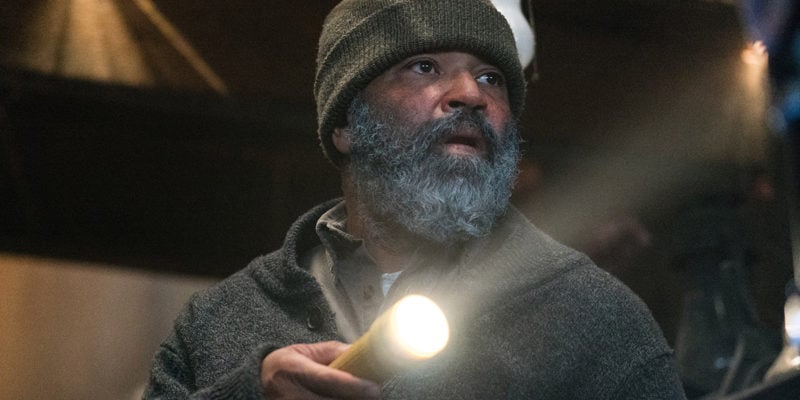 A movie like Hold the Dark is deliberately evoking a feeling over its narrative. The actors are all doing their best to convey without speech, and when they do speak, they all sound weathered and near-death. Skarsgard and Wright both carry the movie into its tense atmosphere, while James Badge Dale has a character that is specifically meant to keep us grounded in reality. The film recognizes that there are people dedicated to the traditions held in the village, which is why certain characters feel like they’re more a part of the village’s infrastructure than others. Skarsgard carries a silent terror to him that thrusts a lot of the film forward, while Wright is solemn and understanding of the ways people deal with emotions that are difficult to contend with by some.

With a cast that feels so attuned to everything happening, Hold the Dark is a staggering achievement in setting a mood. The tone never fluctuates, even when it heads into more hokey territory. That stuff all feels in line with the setting, however, and as I said right away, this really is a movie that embodies the spirit of an atmospheric black metal song. It treads in evil more than most movies would dare, all the while keeping its earthy tones and convincing the audience that perhaps what we classify as evil is actually a natural way of life we’ve become accustomed to fear. Regardless, Saulnier has hit it out of the park again with another brutal tale of survival.

The Way of Haki: A Beginner’s Guide to the Latent Power in ‘One Piece’