NYAFF 2018: ‘The Third Murder’ Is a Thrilling Departure for Kore-eda

The Third Murder, a legal thriller (of sorts), initially seems like a departure for Hirokazu Kore-eda, one of the greatest Japanese directors currently working. Never has an entry in the genre been this meditative, yet still manage to be thoroughly engaging. The film’s mystery trappings are a bit of a red herring — Kore-eda is more interested in the less-known forms of corruption that afflict the Japanese legal system than he is in crafting a true mystery. The Third Murder is a somber film that nonetheless pulses with a barely contained righteous fury.

In the film’s opening seconds we see a brutal killing. Misumi (K?ji Yakusho) bludgeons his former boss to death, then sets the body aflame. His lawyer, Shigemori (Masaharu Fukuyama), enters the proceedings late in the process, after Misumi has already confessed to the crime. The trial is expected to be swift, as Misumi murdered two men when he was younger — surely a third murder involving him can’t be coincidence.

Shigemori’s goals are to merely reduce the charges and spare Misumi the looming threat of the death penalty. His case becomes complicated when Misumi’s story continually changes, seemingly without reason. Other evidence from the family of the murdered man leads Shigemori to question Misumi’s culpability, and whether he’s been lied to the whole time.

Kore-eda has crafted a story that works perfectly well on a surface level as a mystery, but he’s also interrogating the Japanese criminal courts and the ways in which they presume guilt. A key event halfway through the trial should lead to a new trial, with an untainted jury, but the judges and the lawyers jointly agree to continue with the current trial in the interest of a speedy verdict. Despite the chilly, desaturated color scheme, you can almost see a flash of outrage from Kore-eda at their disregard for a man’s life. 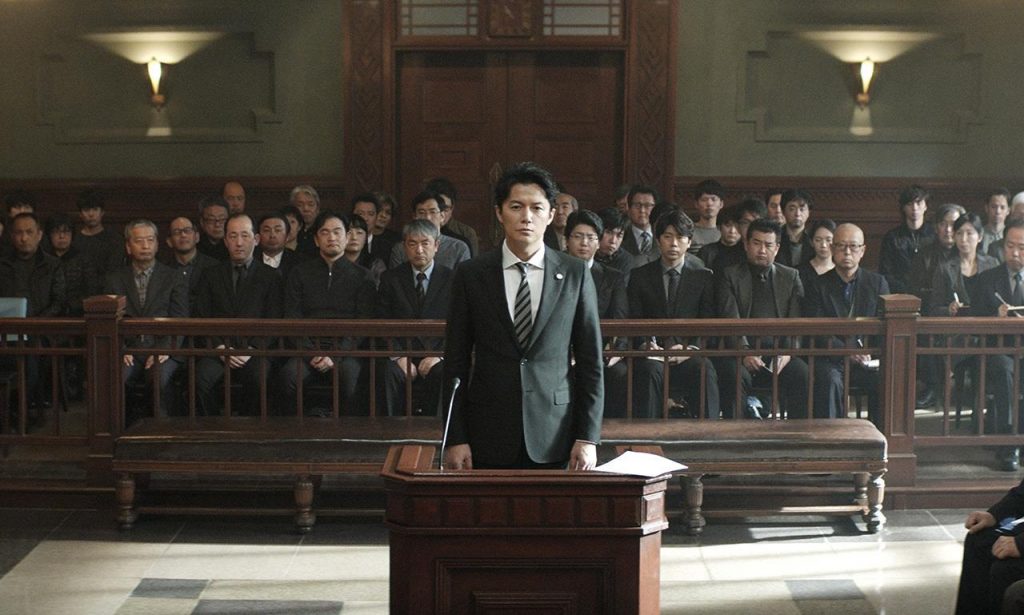 The received wisdom in recent years is that Kore-eda is an heir to the great Yasujir? Ozu, thanks primarily to naturalistic family dramas like Still Walking and After the Storm. It’s nearly impossible to watch Still Walking without thinking of the conflicts between the young and old, or the Eastern and Western cultures in Tokyo Story and Late Spring. Kore-eda returns to that mode more than any other, but aligning his style with those films ignores vast swaths of his filmography. It doesn’t account for the dark social realism of Nobody Knows, the fantasy of After Life, or the utterly bizarre blow-up doll brought to life in Air Doll. Kore-eda has always been about these contradictions, and The Third Murder plays right into them.

Still, his Ozu-inspired style is somewhat present. Kore-eda’s camera often roves about, even though he occasionally leaves it motionless like the older master. He tends to push in slowly toward his characters, as if he’s an eavesdropper who has to lean forward a bit to intrude on their conversation. It creates a sense of intimacy, as if the audience is there amidst these discussions about a man’s fate, yet also turns us into voyeurs spying on the pain of others.

Fukuyama and Yakusho are both excellent in their legal wranglings. Yakusho has the tougher job, though. His accused murderer is an enigma; those who loved him are absent, and he refuses to reveal much about his life and motivations. In a lesser actor the role might have become too sinister, but Yakusho presents enough humanity for the audience to continually question his guilt.

If Kore-eda’s film has a failing, it’s the reliance on hack composer Ludovico Einaudi’s somber piano music. The work of better minimalist composer has been pureed until it lacks all substance and nutritional content. A less imaginative filmmaker would have envisioned the same score, so it’s unfortunate that Kore-eda’s taste lapsed in such an important area. Luckily, the score is absent during most of the more dramatic scenes.

The Third Murder isn’t as strong or revelatory as some of Kore-eda’s best work, but it’s a welcome display of his prowess in other genres. Like many of his films, The Third Murder is mostly concerned with the ills of Japanese society, but it’s still a moving and chilling legal thriller. Sometimes you really can have it all.

‘Kill la Kill’ Review: A Cut Above the Rest