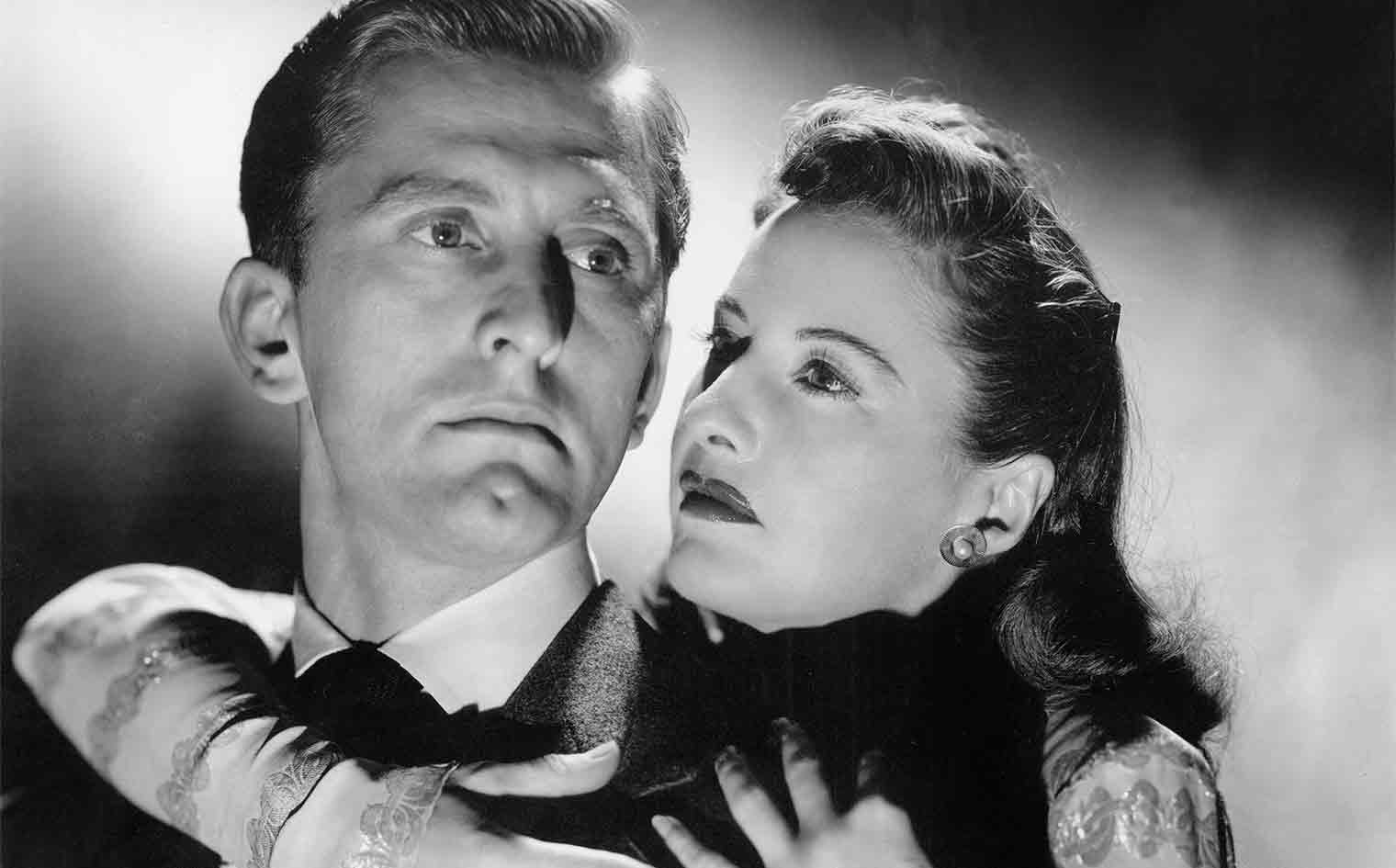 As a teenager, Martha Ivers (Janis Wilson) was a petulant rebel who regularly struck the ire of her caretaking aunt, a wicked woman prone to sucking the joy out of Martha’s life even though she offers the youngling a home in her plush Pennsylvania estate. One of the teen’s attempts to run away with street smart Sam Masterson (Darryl Hickman) changes the rest of her life in ways she could never have anticipated. Caught by the police once again and sent back home, Martha unleashes her frustrations on her aunt, murdering her in the process. The only witness to the killing is young Walter O’Neil (Mickey Kuhn), son of Martha’s tutor. Martha claims an intruder killed the vile old creature amidst a frantic escape. Flash forward years later and Martha (Barbara Stanwyck) has inherited her aunt’s wealth and started a large nationwide company. Walter (Kirk Douglas) is the district attorney. They live a convenient if mostly unhappy, one-sided marriage. Hustler Sam (Van Heflin) makes an unexpected pit stop in town after an automobile accident. When the characters reconvene, old, pent-up emotions run begin to unspool.

If the set-up to explaining the plot to director Lewis Milston’s The Strange Love of Martha Ivers feels elongated, that is because it is, but justly so. More to the point, the sequence during which the film relates the necessary backstory to the tale that will follow does take up a sizeable amount of the run time. Rather than pad the picture unnecessarily, the opening scenes serve as appropriate, tactfully handled preamble that pays off in spades in the story’s latter stages when emotions run high after all the old acquaintances are made. While not all of the younger actors are up to par (Janis Wilson, as the younger Martha, plays the role of the snobbish, elitist heir a bit to the hilt), but the overall effect is well served and bears fruit later on. Much of what is witnessed early is either called back to or directly develops into something bigger and deeper when the trio of leading characters find their lives intertwined once again.

That is partly what makes Martha Ivers such a memorable film. The manner in which it is has the past affect the present is unlike what is experienced in many noir movies. Whereas in most examples the past is a force the protagonists which to flee as they seek refuge and comfort in a future they may very well never attain, in Milestone’s picture the past is what seduces the main players, the lone exception being Lizabeth Scott’s Antonia Marachek by the mere fact that she has no past attachments to Sam, Martha or Walter, but more on her in a moment. When Sam opts to spend some of his unanticipated visits back to his hometown by saying hello to Martha and Walter, it sparks something incredible in the now powerful businesswoman. Sam is hard-pressed not to admit that the encounter sparks a little something in him as well even though he is making do nicely with Antonia, or Toni, as he calls her, whom he met by happenstance on his first night in town. The only one of the three shaken by the re-emergence of the past is Walter, who fears that Sam knows more than he is willing to admit about the night Martha murdered her aunt, which eventually led to the execution of a man completely unrelated to the event. As for Sam and Martha, they are inexorably attracted to one another for better or worse (most viewers can probably guess which one), and while they, especially Sam, may try to deny it, there is unquestionably a magnetism between the two, even after all these years. The slight twist on the film noir trope is appreciated because it allows for a change in the expected dynamics.

Even in the instances where the film adheres to the familiar patterns, it plays its cards wisely and with a special quality. Take Lizabeth Scott (delightful, nuanced, and beautiful, just as always) as Toni. Hers is essentially a role reversal of the sort of part typically reserved for men. A kid from the streets (much like Sam), she is on parole for a crime she committed not long ago, trying to find a way out of the town and fend for a better life. Her chance meeting with Sam, a man who, while not engaged in the most respectable profession, at least appears to have a head on his shoulders and represents a beacon of light in her life. He is her first avenue towards something better and not the other way around.

Then there is Walter O’Neil, played by a very young Kirk Douglas, earning his first starring role in a film. Walter is a district attorney, an influential, important individual in the state of Pennsylvania, but underneath the façade of power is a terrifying fragility. The sequence of events that have led him to where he is today, from the sentencing of an innocent man to the gallows to his frustratingly unsatisfying marriage, has left him hollow, afraid, and paranoid. Prone to the occasional drunken stupor in order to make the pain go away, Walter is immediately hostile towards Sam’s sudden reappearance after so many years, fearing a blackmail plot, something Sam, in actuality, has absolutely no intention of engaging in. All the starring players are very good in their leading roles (Heflin, Scott, and especially Stanwyck are always dependable actors), but Douglas is absolutely superb. He storms out of the gates with a believable, gut-wrenching performance that feels as honest as it is devastating.

While there is definitely something to be said of the economic way with which many older movies share their tales, there are nevertheless occasions for which more time is required to allow the story to breathe. A host of films from this era clock in between 60 and 80 minutes, and when each minute is utilized to the fullest, the results are brilliant. Martha Stewart, in contrast, by the very nature of its plot, demands more time. Rather than feel long in comparison to other entries, director Lewis Milestone and screenwriters Robert Rossen and Robert Riskin obviously understand full well what they have on their hands and play their cards accordingly. The movie never overstays its welcome, consistently raising the stakes emotionally, organically so, and staying true to the characters in the process.

The Strange Lives of Martha Ivers might feel familiar in many ways, but it succeeds in carving its own special place in noir lore. Starring a bevy of actors that made names for themselves in the lauded film movement, Milestone’s picture embraces the melodrama inherent in the script, tapping into the core of the quartet of central characters. Martha’s love is indeed strange, but the word that comes to mind to describe her movie is ‘great’.