When conceiving of The Filmstruck Cram, a priority was certainly to highlight the site’s role in making available the filmographies of iconic directors: Kurosawa, Hitchcock, the Coen Brothers, and Wong Kar-Wai have already appeared in this space — and now Robert Altman. Altman was famously somewhat in the woods during the 1980s after his Popeye became a historical Hollywood mess. One of the most prolific and well-regarded auteurs of the 1970s, he returned to prominence with The Player after a decade which was consequential for America and professionally unkind to the director. In response to both his filmmaking struggles and the corporate realities of post-Reagan America, The Player is a deft skewering of Hollywood that doubles as a cry on behalf of movies.

Altman’s satire follows Griffin Mill (Tim Robbins), a film-studio executive who is on the brink of being replaced by a younger, flashier hotshot (Peter Gallagher). At the same time, Mill receives a string of threatening postcards from someone claiming to be a jilted writer who Mill forgot to call back. While Mill isn’t a cartoonish villain — Robbins is an affable presence, and his executive often just seems motivated by professional and actual survival — Altman locates the degradation of the studio system in Mill’s job description. We see him take a series of meetings which skew humorous (one’s a parodic pitch for The Graduate 2), but Mill doesn’t actually have the power to make a movie. Instead, he only has the power to turn down a pitch or pass it on to higher-ups. As a result, Mill’s actual day-to-day is an exercise in ass-covering; he doesn’t need to succeed — he just needs not to fail.

Altman’s commentary is (like the most insightful satire) even more applicable today. One scene finds Gallagher’s exec glibly turning newspaper headlines into log lines, making the point that writers are an expendable cog in the filmmaking process. One can only imagine what fodder Altman would derive from the Superhero industrial complex. As for his portrait of Mill as a self-interested suit, Altman’s skepticism of corporate systems presages the emergence of even larger, more faceless media conglomerates. 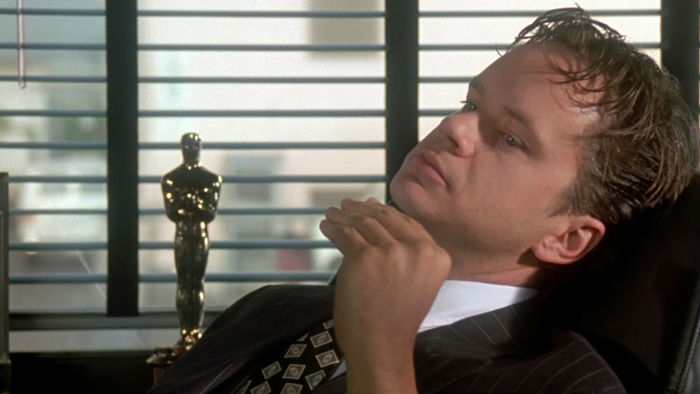 The film’s first inflection point — and Mill’s initial turn toward villainy — comes after he confronts and accidentally kills the writer he assumes is responsible for his postcards. Adding to his precarious situation, he enters a romantic relationship with the dead writer’s girlfriend, which arouses the suspicion of the local detective (Whoopie Goldberg). Altman here is angling for his most obvious satire, the ultimate equivalence of studio executive and killer. Indeed, as the film wears on, Robbin’s appearance begins to morph; his usually slick hair becomes unkempt, and his suits become progressively darker until, in the film’s climactic scene, he is wearing all black.

Mill’s heel turn runs parallel to The Player’s secondary plot, in which his studio produces a gritty arthouse film. Here, Altman and screenwriter Michael Tolkin offer broad satire in the form of insider jokes which enlist cameos from A-list actors to underline the formulaic nature of Hollywood filmmaking. Predictably, the gritty arthouse film, Habeas Corpus, is neutered and compromised by the end of The Player, and made toothless for mass-market appeal. Altman’s film ends with Habeas Corpus being a hit and Mill running the studio, and his message that murder is acceptable for a studio executive as long as they can deliver a hit, is clear. Still, The Player isn’t merely sardonic. Characters reference films and figures from Hollywood’s golden age throughout, and Altman’s camera lingers on movie posters which emphasize the danger Mill is in. While he is skewering the business of Hollywood, Altman is testifying to the kind of movies he himself made just a decade earlier. The Player is a movie-inside-a-movie about movies, stewarded by a director who is laying bare his love for the medium while condemning the industry which controls it.

Christopher Nolan’s ‘Inception’ and a New Definition of “Critic-Proof”

10 years later: Christopher Nolan’s “Inception” was one of the smartest action movies