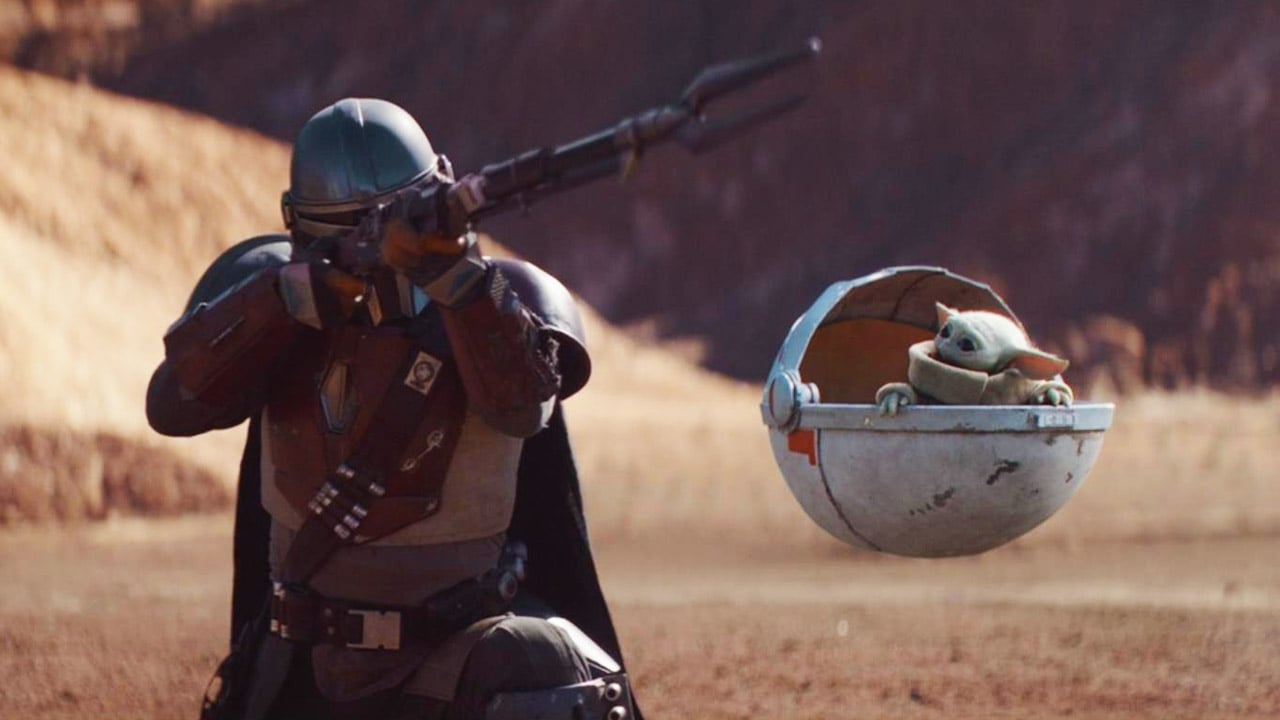 The benefit of The Mandalorian‘s soon-to-be weekly releases is that it gives times to ruminate on the preceding episode. Case in point: Werner Herzog’s mysterious “Client” is clearly part of the “Imperial Remnant” — in new Star Wars canon, the fractured factions of the formerly very centralised Galactic Empire. It makes sense that these groups would be so disparate in the ensuing power vacuum, and now Herzog’s already ominous “good to restore the natural order of things after a period of such disarray” is far, far more terrifying for the state of the galaxy.

That sort of information percolates at the back of the mind when watching The Mandalorian’s “Chapter 2: The Child,” which draws on the audience’s existing knowledge of Star Wars to elevate the piece far more than the first episode. While “The Child” is squarely focused emotionally on character relationships, there is significant interplay between viewers and the screen through Rick Famuyiwa’s direction of showrunner Jon Favreau’s script, creating dramatic irony, visual symmetry, and a certain degree of fan-service. Indeed, the first few minutes of the surprisingly short thirty-minute episode is almost a condensed redux of R2-D2 and C3-PO’s escapades on Tatooine in A New Hope. There’s even a Jawa sandcrawler!

In the same way that Rogue One’s chaotic man-to-man confrontations help set the tone for that film, the Mandalorian slugging people while his burgundy armour glints amongst the orange hues of the canyon encapsulates the grimily poetic atmosphere that “The Child” possesses.

Unlike the Jawas capturing R2-D2, or Luke Skywalker being knocked out by Tusken Raiders, the Mandalorian acquits himself much more successfully against his Trandoshan ambushers. Director of Photography Baz Idoine and his team’s coverage of the melee combat is engaging and clear. The cinematography keeps the impacts of the twirls, slams, and shoves centrally framed in mostly full and medium shots, as the Mandalorian wields his long blaster like a staff, then snipes the assailants as they run towards his bounty in a particularly satisfying long shot.

It feels quite similar to the combat in Rogue One, which shouldn’t be surprising given that Idoine previously worked as the second unit director of photography. In the same way that Rogue One’s chaotic man-to-man confrontations help set the tone for that film, the Mandalorian slugging people while his burgundy armour glints amongst the orange hues of the canyon encapsulates the grimily poetic atmosphere that “The Child” possesses. It makes stabbing through muddy, matted hair beautiful.

This review has held off necessarily spoiling the big reveal at the end of the last episode for long enough. If you’re somehow reading this and haven’t seen “Chapter One,” (insert Jedi mind trick) this is not the review you’re looking for.

Fifty-year-old baby Yoda is adorable! Disney’s got its latest sold-out toy just in time for Christmas. So the Mandolorian now has himself a baby “Yodaling” to keep track of at all times; its innocent eyes observe both the delight of dune frogs and the brutality with which Mando kills and literally obliterates enemies. In the aforementioned fight scene, editor Andrew S. Eisen intercuts between shots of the Yodaling watching serenely, but also shots from the Yodaling’s perspective.

Focusing in on the Yodaling’s viewpoint throughout the episode is probably Famuyiwa’s best decision as director — not only because it makes the puppet feel real and not a prop, but the child is a constant reminder that bounty hunting (and killing) has a ripple effect on others. Part of Star Wars’ appeal has always been fancifully designed characters shooting some mooks, and although The Mandalorian indulges in this pleasure, it also seems to be slowly deconstructing mythic qualities. Actions have consequences, and this Yodaling acts as a yardstick to measure Mando’s morality against.

This all lends itself to the ambiguity pervading the “Chapter 2: The Child.” There are many wide shots where Mando walks through valleys and across the rocky outcrops with a floating pram in tow, with Mando and the Yodaling spread far apart, visually illustrating an emotional gulf between them. As the episode wears on, however, their physical separation in scenes closes until Mando is not-quite gently rocking the sleeping baby. He could be abruptly attempting to coddle as an awkward parent, but he also could also just be making sure his prize still is alive so it will “survive and bring [him] a handsome reward” (when Kuiil says this, does he mean emotional fulfillment or money?). As is often the case with Mandalorian bounty hunters, the question of intent is left to subtext and nebulous silence.

Actually, apart from a few grunts here and there, Mando says nothing at all for the episode’s first ten minutes. In lieu of talking, the handheld cinematography, with its close-up shots or momentarily going out of focus when Mando is disorientated, tries to convey the bounty hunter’s mental state. It’s also interesting to see the armour itself act as an evolving symbol for Mando as person. Where in “Chapter One” the addition of the shoulder plate suggested a form of exterior wholeness, “Chapter 2: The Child” sees Mando continuously fixing an increasingly tattered and fractured suit. Mando’s scarred childhood, as shown in “Chapter One,” clearly still torments him, and his emotionally suppressive stoicism may just have been broken through by meeting this baby.

The muteness is also ripe for some cartoonish, exaggerated visual comedy to break the solemnity. Mando setting the Yodaling down, only for the baby to immediately trot over, is like watching the antics of Jerry and baby Nibbles from Tom and Jerry. And after an action sequence recalling Indiana Jones and the Last Crusade’s tank climbing, Mando then mimics Wile E. Coyote as he falls off a sandcrawler. Pedro Pascal’s comic timing whenever he cocks his head in disbelief or sighs deeply is hilarious. Even composer Ludwig Göransson has some fun, playing a ridiculously triumphant trumpet piece as Mando’s convoy trudges slowly through pouring rain. As in “Chapter One,” “Chapter 2: The Child” modulates its tone expertly to naturally weave these extremes in.

Part of that may be because the story is so pared back, and the location is evocative enough to bleed into and dictate the wistful atmosphere. Famuyiwa lets the stunning red palette of the landscape’s geological formations and sunsets take prominence throughout, and it lends visual consistency. Tangentially, “Chapter 2: The Child” comes as close as Star Wars ever has to observing the principles of theatre laid down in Aristotle’s Poetics, taking place on — and never shifting from — the red planet Arvala-7 (unity of place) and having the single driving dramatic action of leaving the wasteland behind (unity of action). That it ditches Aristotle’s rule that a drama should only take place across a single day validates Kuiil’s claim last episode that one needs a Blurrg to traverse the terrain.

Speaking of Kuiil, he might just be the nicest character in Star Wars thus far. For the second episode in a row, he declines Mando’s earnest offer of payment, saying, “you are my guest and I am therefore in your service.” The service that comes with hosting ends, however, and therein lies the difference. As he says, “I have worked a lifetime to be finally free of servitude.” It is possible that we or Mando will not see nearly enough of Nick Nolte’s loveable character going forward, but the impact he has had on Mando is quite profound — especially Kuiil’s faith in his guest’s abilities, despite never having met a Mandalorian. After Mando returns with the goods needed to barter back parts that were stolen from his ship, he says, “I’m surprised it took you so long;” if the Yodaling is a test of morality, then Kuill is a kind, humanising force for Mando.

Therefore, the fact that this idiosyncratic, wise, old Ugnaught cannot remotely understand a phenomenon of The Force demonstrates the extent of the impact the Jedi Purge in the aftermath of Order 66 (Revenge of the Sith) had on eradicating not only Force users, but knowledge of its existence as well. The Yodaling’s Force sensitivity is not a surprise. Surely the use of Yoda’s species was to clue the audience in as soon as possible, because otherwise they could have used many other species, as was done in The Clone Wars’ “Children of the Force” or Rebels’ “The Future of the Force.”

The purpose of accentuating the dramatic irony in this story is as yet unknown, but the reliance on an awareness of Star Wars’ wider canon is intentional. Anyone with knowledge of Darth Sidious’ attempts to raise and experiment on an army of Force-sensitive children would probably suspect the same aims for Omid Abtahi’s “Dr. Pershing.” However, the Sequel Trilogy is the real looming spectre for The Mandalorian. “Chapter Seven” releases on the same day as The Rise of Skywalker, so it’ll be interesting to see whether there are any direct connections. However, while the galaxy is vast, the knowledge that the First Order eventually rose up, and that Luke Skywalker’s attempts to establish a new Jedi Order failed, makes this story of the Mandalorian and his child a potentially very tragic and futile one. So we should enjoy the quiet moments while they last.

That said, Padawan Ezra Bridger from Star Wars Rebels is currently out there and presumably surviving in the post-Return of the Jedi period where The Mandalorian is set. So maybe this will be a happy ending if Ezra lasted through the terrors of the Empire!

If I recall correctly, Yoda died at 900 years old, and said he had been training students for 800. So he must have been at least a Jedi Knight by 100 years old. Maybe the next 50 years for the Yodaling will be full of rapid growth? It already has wrinkles!

On that note, how long are Yodaling foetuses stuck gestating in the womb? Actually, scratch that — I don’t need to know.

The assassination of IG-11 in “Chapter One” obfuscated my thinking, but there are at least three factions after this baby: Herzog’s group who hired Mando, whoever hired IG-11, and the group protecting the child that the duo eliminated.

Also, Mando’s prejudice against droids (and everyone’s) makes sense given that number of Confederacy droids annihilating everyone during the Clone Wars, including his home as seen in the flashbacks (benefit of Disney Plus: The Clone Wars is available to rewatch).

Can somebody please adapt Lone Wolf and Cub? Please?

Declan Biswas-Hughes has led a very nomadic life, which influenced his decision to study European and International Law. He unwinds from writing essays on the minutiae of legalese by writing things like essays on the minutiae of anime, because he really knows how to party. You can find him on Twitter (@fringence), popping up on AniTAY, and occasionally out clubbing when he’s not trying to finish a novel.