In recent times, local multiplayer has been slashed from most mainstream titles in favor of features like online content and better graphics. But thanks to an ever-experimenting indie scene, couch co-op isn’t dead just yet.

Most AAA developers have abandoned what used to be a gaming staple in favor of either single player content or multiplayer that is exclusively online (such as Blizzard’s Overwatch). But in the not-so-distant past, anyone you wanted to play with had to be physically there.

Some of the earliest video games were intended for two players, such as Spacewar! (1962) and Pong (1972). The 1980s – the golden age of arcade games – saw a dramatic upsurge of arcade consoles designed for solo and cooperative play alike. The action arcade game Joust (1982) is often credited with popularizing two-player co-op. Shortly after, games with local two-player became commonplace, while titles like Gauntlet (1985) and Quartet (1986) boasted four-player local co-op. 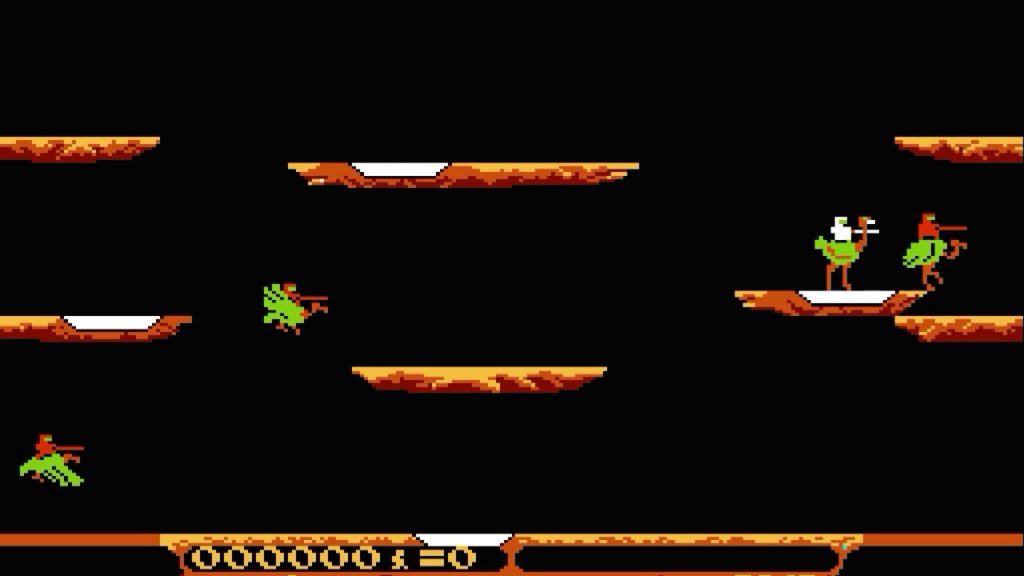 Home consoles certainly existed around this time, but local multiplayer didn’t become the norm right away. Early video game consoles lacked the technical capability for simultaneous multiplayer. Certain games made for the first three console generations (such as the NES version of Double Dragon) advertised 2-player gameplay, but simply had an alternating campaign where only one person could play at a time. Seeking to emulate the popularity of arcade machines, companies like Konami soon began porting multiplayer arcade games to consoles. Among the most popular of these ports was the two-player run-and-gun Contra, whose NES release was considerably more successful than the arcade version.

As technology improved, developers continued to innovate as the idea of playing side-by-side with a companion gained traction.

By the 90s, local multiplayer was a staple in the gaming atmosphere. Square’s Secret of Mana and Namco’s Tales of Symphonia offered both two and three player capabilities. After the release of the Nintendo 64 in 1997, four controller ports became industry standard. Among the most renowned games on the system was Goldeneye 007, which featured four-player split-screen alongside its single player story campaign.

In the mid-2000s, with the reveal of internet-driven gaming services Playstation Network and Xbox Live, online multiplayer took the video game world by storm. Multiplayer gaming shifted dramatically as games like Call of Duty 3 were capable of having two dozen players in a single match. Subsequent titles of many well-known series began to remove local co-op in favor of online multiplayer, generating controversy among fans and critics alike. Although companies have justified this choice by explaining that they prioritize improving graphics and gameplay, it’s difficult to pin down just why local multiplayer keeps getting axed.

Still, certain communities – notably, the fandom surrounding Super Smash Bros. Melee – continue to flourish despite the pervasive dominance of online play. SSB still has a solid following & remains one of a dwindling number of communities surrounding a local multiplayer game.

Like the swing of a pendulum, the retro aesthetic has begun to step into the limelight once more. Nostalgic indie titles like Cuphead and Celeste pride themselves on being modern re-imaginings of early visual and gameplay patterns. Retro has come back into style – and with it, local multiplayer. Other indie games like Enter the Gungeon and Crypt of the Necrodancer tacked on local multiplayer capability in addition to the solo campaign, garnering added praise from fans as a result. Many other small but mighty game studios have tapped into the couch co-op sphere:

This 2016 kitchen simulator by Ghost Town Games was lauded for its dedication to compelling yet balanced cooperative gameplay. In a Diner Dash-esque style, each player prepares ingredients, cleans dishes, and serves orders while evading increasingly absurd obstacles. In an interview with Gamasutra, developer Phil Duncan explained that the kitchen is “a perfect analogy for a cooperative game: an occupation where teamwork, time management, spatial awareness and shouting are all vitally important.” Its recently released sequel, Overcooked 2, boasts added fluency and even more interesting level design. If you have an appetite for fast-paced meal assembly, look no further.

From Matt Makes Games (creators of Celeste), this 2D archery combat game features local co-op with up to four players, making it a wonderfully simple party game with just the right amount of chaos. Treasure chests grant you wings, bomb arrows, and other combat advantages. If arena-style free-for-all isn’t your thing, the game also features a one or two-player campaign with additional levels and unlockable bosses.

Originally, Klei Entertainment had no intention of adding multiplayer to their solo survival game Don’t Starve. The studio clarified this when announcing the multiplayer alpha on the Klei community forum, explaining that “at the time we didn’t have the resources to make it happen and we weren’t confident that it would actually work both in concept and implementation.” But thanks to widespread demand and some new additions to the developer team, multiplayer capability was added in the form of a free expansion: Don’t Starve Together. The game can support up to six players at a time in the form of either public matches with strangers or private matches with friends. If you like teamwork with a touch of Tim Burton, look no further. 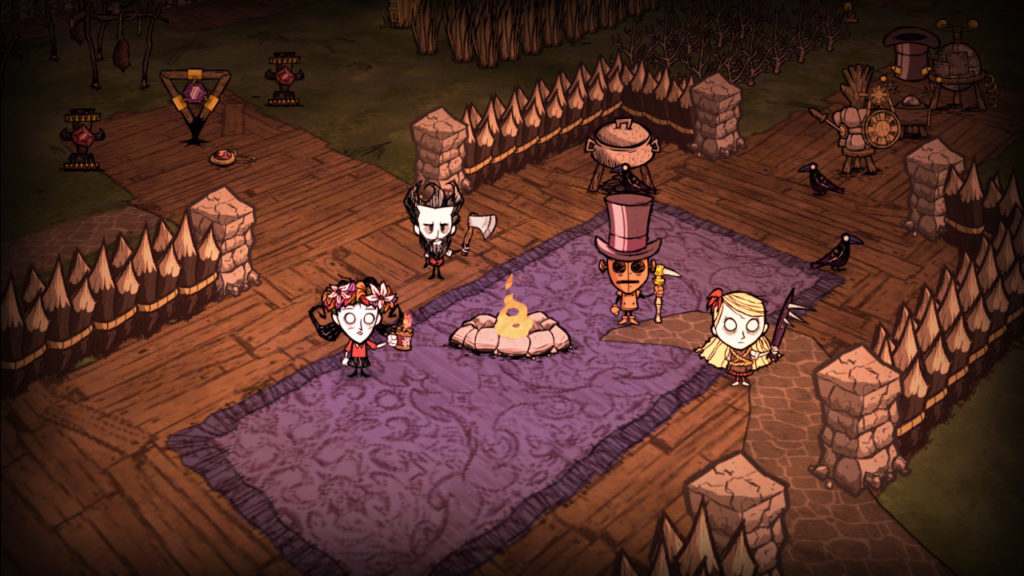 From Canadian studio Steel Crate Games, this straightforward but stress-inducing game is meant for two to four players. One player (the “Defuser”) is tasked with defusing a bomb while the others (the “Experts”) read them instructions from a manual. The Defuser can’t see the manual while the Experts can’t see the bomb, so cohesion and communication are an absolute necessity. The bombs vary wildly from round to round, providing a solid sense of replayability.

Released in April 2018 following a successful Kickstarter campaign, this satirical dating sim places up to four players in “Spooky High,” where they must successfully find a monstrous prom date within three weeks. Although it is demonstrably based on dating simulations – a heavily single-player genre – the game is best enjoyed with company. The concept may be simple, but the replayability is surprisingly high – the game includes a variety of items and minigames in addition to multiple endings.

Lovers in a Dangerous Spacetime

A vibrant but strenuous space shooter, Lovers in a Dangerous Spacetime tasks up to four players with piloting a spaceship through hostile territory and rescuing your captured allies (who are all adorable animals). Each ship contains various stations for one specific purpose (navigation, guns, a shield, and a powerful “Yamato Cannon”). All four campaigns end with a boss fight, each with their own unique set of attacks. Don’t be fooled by the cutesy art style, though the upper-level difficulties demand a considerable amount of teamwork and coordination.

Originally a simple platformer conceived at a game jam, Lovers is partially inspired by the art of Sailor Moon and Katamari Damacy. Developer Matt Hammill mentioned in an interview that the team “wanted to do a space game with gunfire, all that nerdy Star Wars stuff, but we wanted to avoid going with a default gunmetal, chrome, cyberpunk textured-look.” The result was a bright and bubbly ballet of gunfire, aliens, and good old-fashioned search & rescue.

With PC multiplayer fresh out of beta, Eric Malone (aka  “ConcernedApe”) has been working tirelessly to add multiplayer capability to the hit 2016 farming sim. Players will be able to visit each other’s farms and complete tasks in tandem. Unlike most couch co-op games that thrive on high-speed competition, Stardew Valley is a nicely paced experience that will allow each player to farm, fish, mine, and explore at their own tempo (as long as you’re in bed before midnight, that is).  It’s unclear exactly when the patch will make its way to other platforms, but according to the developer blog, the console versions are in development and coming soon.

The indie scene has certainly embraced local multiplayer with no signs of stopping. Still, this doesn’t mean the mainstream has completely abandoned it. Even Microsoft decided to roll back their previous decision and reintroduce split-screen co-op to Halo 5 after a prolonged outcry from fans.

Couch co-op is indeed a thing of the past, but it doesn’t have to stay there.

From Concept to Card: Behind the Art of ‘Faeria’

Don’t starve together does not have couch coop…

The O.C. ‘Pilot’ had no Right to be That Good

Cheers: ‘Give Me A Ring Sometime’ is the Definitive Sitcom Pilot