There’s a version of The Lie that exists in some alternate universe, one in which Veena Sud’s film is a black comedy, a modern film noir that encourages us to consider the absurdity of everything that happens to its unlucky characters. Unfortunately, this universe’s version of The Lie is endlessly dour and oppressively gray. It’s a slog of a film that makes one wish Sud had even the tiniest hint of a sense of humor.

The film stars rising actor Joey King as Kayla, an aspiring dancer who mostly lives with her cold and sometimes controlling mother, Rebecca (played by Sud regular Mireille Enos). Rebecca is preparing to ship Kayla off to a dance camp against her will. Perhaps Kayla once wanted to do everything in her power to become a principal dancer, but the stresses of a teenage social life make her want to leave it all behind in order to fit in.

Kayla father, Jay (a frothing Peter Sarsgaard), is divorced from her mother. He lives the Bohemian life of a downtown-based musician, replete with the requisite younger girlfriend. (The film suggests they live in New York, but it’s pretty clearly shot in Toronto, where Sud is originally from.) Jay has been enlisted to drive Kayla to her clinic upstate, despite his history of flaking out.

Along the way they pass a friend of Kayla’s at a rural bus stop, so she forces Jay to give her a ride. The friend has a testy relationship with Kayla at best. She forces Jay to stop so she can relieve herself almost as soon as they get back on the road. Kayla accompanies her into the woods to do her business, but when Jay hears a scream, he runs to find the friend missing and Kayla sitting along on a bridge over a rushing stream. The girl is gone, and Kayla may have something to do with it.

The twists that The Lie goes through are frequently absurd, so much so that they go beyond the noir origins Sud seems to be pointing at and toward parody.

This early part of the mystery is the film’s only successful section. Sarsgaard is an actor who can turn it up to eleven in the blink of an eye, and he deftly portrays the panic of a father concerned for his child. But that quickly passes as Jay and Kayla head back home and try to figure out a way to ignore whatever has just happened. Complicating matters is the missing girl’s father (played by Canadian actor Cas Anvar), who becomes increasingly unhinged as he begins to suspect something terrible may have happened. 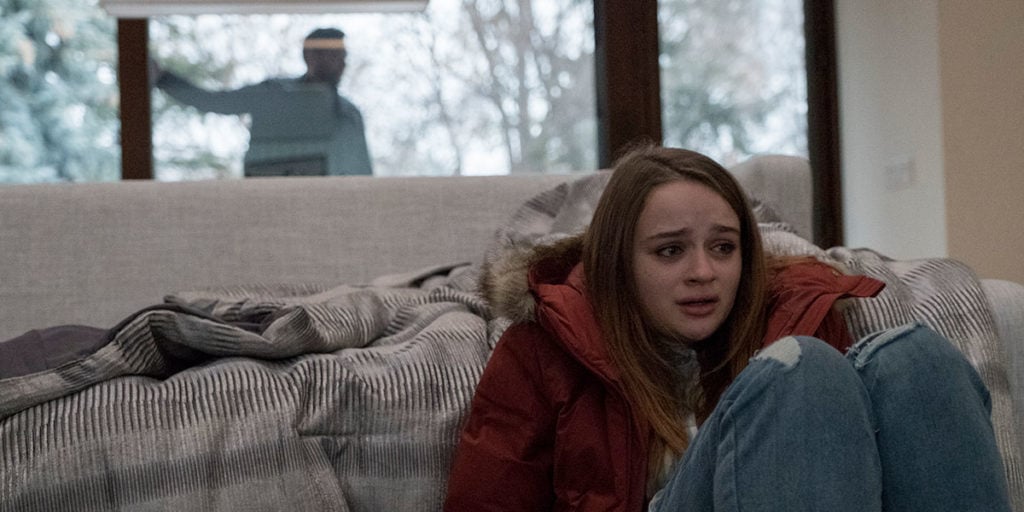 All of this happens with the steeliest of palettes. Sud could have shot her film in black and white and it would have barely looked any different. She first rose to prominence with the AMC series The Killing (2011-2014), which featured a similar dreary look that was dated even back then. A complete lack of color isn’t required to tell a dark story — it’s merely a crutch for an unimaginative filmmaker.

The twists that The Lie goes through are frequently absurd, so much so that they go beyond the noir origins Sud seems to be pointing at and toward parody. If Sud had written a bit of humor into her screenplay, these could have been fun twists, but that’s not a direction she has much familiarity with; brutal and depressing is the only tone she knows.

Worst of all, The Lie wastes a talented cast with increasing levels of histrionics. King is a talented performer who often gets stuck with roles that fail to show off her talents, to which this can be added. Sarsgaard can quite effectively go off the deep end, but he needs a talented and subtle director to know when to deploy those talents. Sud just sets him loose and that unnecessary ferocity continues until the film’s final moments. Even Enos, about as reserved a performer as there is, is contaminated by Sarsgaard’s scenery chewing. (They must have had bits of plaster stuck in their teeth for weeks after shooting.)

The building blocks of an effective neo-noir are all present in The Lie, but Sud only has one mode, and it’s the wrong one for this film.

Notes on TIFF 2018: Flying to Toronto With Robert Bresson

TIFF 2018 was my first major film festival. My recent readings from the French master Robert Bresson fundamentally altered how I perceived the films...

The Looming Tower is a Hulu miniseries dramatizing the events that led up to the terrorist attack on the World Trade Center in Lower...