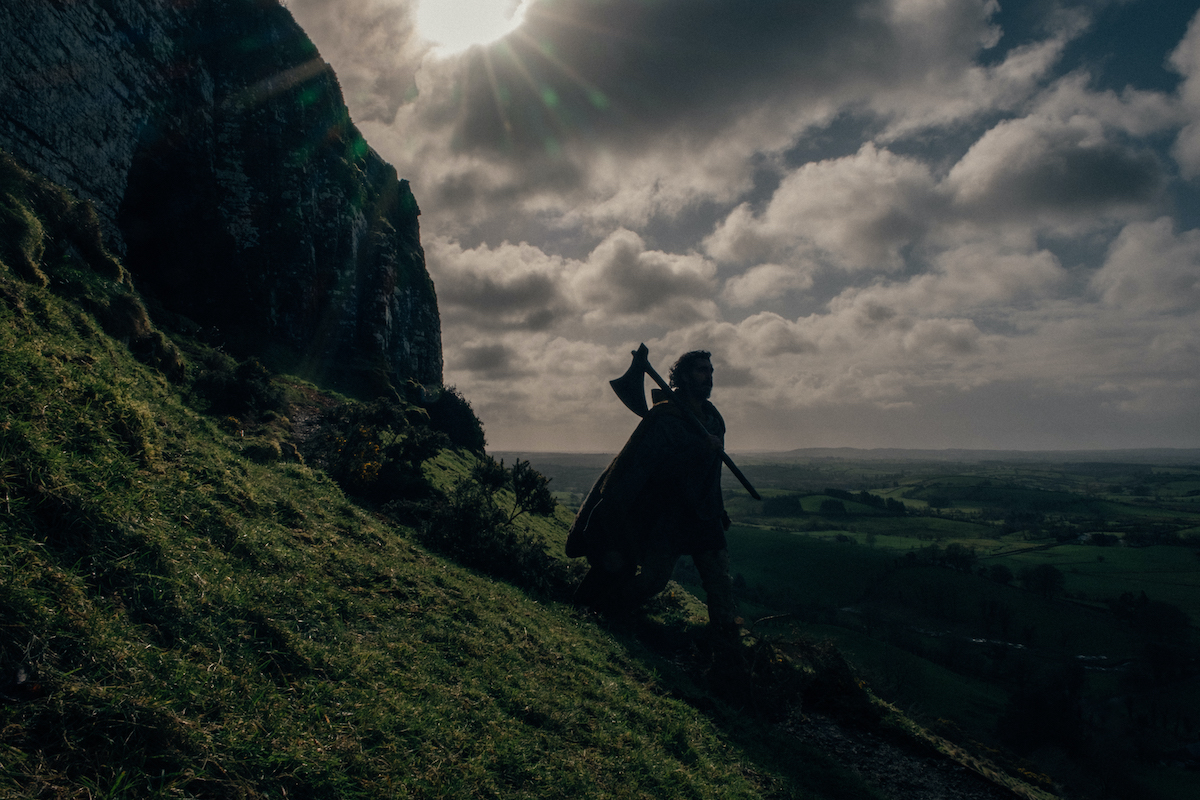 Immediately presenting itself as a film based on a story with no known author, The Green Knight has David Lowery following up his critically-acclaimed A Ghost Story with an epic, ambitious unraveling of mythmaking in an age of “chivalric romance”. Based upon the popular Arthurian story, Sir Gawain and the Green Knight, Lowery deconstructs and reassembles a tale as old as time to prod at the fascination with turning man into myth. Grandiose and epic in its presentation, The Green Knight is a hypnotic adventure that is undoubtedly the director’s best film.

Confronting its source material’s unknown origins, The Green Knight effectively channels the desire to create heroes. As Gawain (Dev Patel) sits beside the King (Sean Harris) and Queen (Kate Dickie), they request he provide a tale to accompany their Christmas dinner. Young Gawain sits ashamed, not having a single tale to tell, until suddenly the Green Knight (Ralph Ineson) barges into the castle and proposes a Christmas game. A person may strike the Green Knight, and then one year hence they must meet him at the Green Chapel to receive the same strike. Gawain agrees to the blow-for-blow game, beheads the Green Knight, and watches as he picks his head back up and instructs that he will await Gawain at the Chapel in one year.

Before Gawain has even headed off on his journey, he’s already the stuff of legend. Local puppet shows for the kids regale the tale of Gawain and his bravery in accepting the Green Knight’s challenge. Even with him still awaiting his date with destiny, uncertain of if he will follow through with holding up his end of the bargain (is the Green Knight really just going to be sitting and waiting at this chapel?), he’s heralded as a brave individual. It’s apparent once he somewhat reluctantly sets off to meet his fate that he is not brave – instead, he sees completing this challenge as an initiation into knighthood and a testament to his honor.

Armed with virtually no guidance to his objective, The Green Knight is composed of vignettes that take place along Gawain’s journey to the Green Chapel. Trials that test Gawain’s dedication to seeing his goal to the end, these smaller interactions accentuate who Gawain is as a person and what his values are, even as the quieter beats in between test his resolve.

It’s the quieter moments that give The Green Knight it’s meditative, reflective look at Gawain’s journey and his end goal of finding his worth. One of the film’s most visually striking sequences, in a sea of gorgeous cinematography from Andrew Droz Palermo, is also a searing glimpse into Gawain’s inferiority complex. A man among legends, Gawain is nothing without this journey and all along the way he’s tested, but it’s the moments of reflection forced in isolation that truly strip him down to his core values.

The Green Knight feels epic because of its languid pacing, sumptuous visuals, and haunting imagery that peers into the very soul of man. It’s as close to an Arthurian Doom Metal album that anyone has gotten, regaling a tale of a man seeking accolades in a quest destined to end in his own demise. A gloomy, thick atmosphere permeates throughout the landscape, with this crushing feeling that there is no positive outcome to Gawain’s journey. That’s because even in his most determined feats, he is still more man than myth and succumbs to the same fear of death as any legend likely has in his final days.

Patel’s ability as an actor is what gives this foreboding doom a palpable dread. His physical performance and undeniable charm all lends to a sense that everyone already sees Gawain as a knight, even if his actual status betrays that. In an early encounter with a teenager looting corpses in a strip of land ravaged by war (played by the always fascinating Barry Keoghan), his sights are immediately set on Gawain because of his appearance. Whether he is or isn’t a knight is inconsequential to him: Gawain appears to be one, and therefore he is one. Much in the same way that no one particularly questions whether Gawain will come back alive- they believe he already has completed his task, even if he hasn’t left yet.

Keoghan and Patel are only two fantastic performances in the film, with every actor leaving a piece of themselves on the screen. Most notable is Alicia Vikander whose performance as Essel feeds into the character’s impact on Gawain. She gets a lot to do in the film, but her character is also tantamount to Gawain finding out what matters to him on this quest even if he cannot fully see it. There’s also no denying Sarita Choudhury’s role as Gawain’s mother, who steers her son on his journey, as a majorly impacting performance filled with a motherly love and an underlying desire for something more from her son. Featured as well is Joel Edgerton who gives The Green Knight a healthy dose of levity, mystery and humor, in addition to Erin Kellyman as a ghost searching for her head.

There’s a balance that these performances all strike that keep Gawain’s journey feeling important, daunting, but also frivolous. He could complete the quest and potentially die or be left with nothing but a scratch. What if The Green Knight isn’t even there? What would happen if he turned back but said he completed the quest? It’s all an unknown and the game’s severity isn’t ever laid out, forcing Gawain to apply his own justifications and fears to why he should complete his adventure. Every encounter is uneasy, and there’s a seriousness in Ralph Ineson’s introduction as The Green Knight that doesn’t completely match with everything else on screen. Maybe he is deadly serious, even if it is just a game. Or maybe it isn’t a game at all.

The Green Knight occasionally finds itself straddling a very fine line between self-seriousness and medieval camp. It can be silly, but it can also be unnerving. It veers into the absurd, but it maintains a tension or grandiosity to it all. Whether that’s the film’s incredible score from Daniel Hart emphasizes the Doom metal atmosphere smothering the movie, or it’s the foreboding unknown conclusion to the journey, it all keeps The Green Knight tempered and exact in its execution.

Regardless, Gawain’s quest is a story that ends up told through the ages, and Lowery’s adaptation of the anonymously written source material only further accentuates the divide between what we want to be true and what is true. Most of the film feels dreamlike, and that seems by design. By far, The Green Knight is Lowery’s most accomplished work and one of the greatest cinematic Arthurian adaptations there has ever been.

True Legend is a step above most forgettable Kung-Fu films