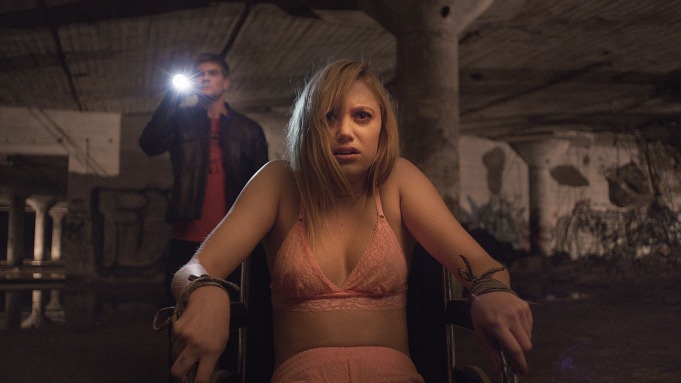 31 Days of Horror: It Follows

When it premiered at Cannes in 2014, news of subversive horror It Follows quickly spread. It’s a small indie film with a relatively unknown cast about the most well-visited horror trope, sex. If somebody read just the synopsis, It Follows sounds like a horror film that is anything but subversive. A creature stalks and kills young people and the only way to escape it is to pass it along to the next person through sex. Taken at face value, the underlying message is that sex is bad so don’t do it. However, director and writer David Robert Mitchell completely avoids that trope.

After the gruesome off-camera death of a young woman in the opening scene, the audience meets protagonist Jay (Maika Monroe). She’s young, beautiful, and very chill. Her sister (Lili Sepe) and friends (Keir Gilchrist and Olivia Luccardi) are interested in hearing about the new guy in her life. Without much exposition, and just some glances, it’s immediately clear that one of her friends, Paul (Gilchrist), has an unrequited crush on Kay. The next-door neighbor, Greg (Daniel Zovatto) also likes to give Jay longing looks from his driveway. Alas, she’s going on a date with Hugh (Jake Weary).

Jay and Hugh have a few innocuous dates. Then they have sex, and it ends with a drugged Jay tied to a wheelchair in a creepy abandoned building. Hugh explains to her that she’s cursed, shows her the creature now stalking her, and tells her she’s lucky he even explained all of this. Come on Jay – be thankful! Hugh literally dumps her in her underwear in front of her house and drives away. As the rest of the story unfolds, it becomes obvious it isn’t about promiscuity and traditional horror stories about what happens to the people, especially girls and women, who have sex.

It could be an allegory for the cycle of abuse and how people can pass on trauma. Maybe it’s about sexual assault. The viewer assumes that most of the people who pass along the curse probably do so just like Hugh. Is that a violation of consent in a way? That the person doesn’t know this is what they’re getting at the end of the interaction? It could be. It could also be a way of making sex boring, routine, just a regular part of life that everybody does. It’s the perfect way to pass along a curse. There is never any sex-shaming, slut-shaming, or correlation between a character’s value and whether they have sex. There isn’t even the banal routine virginity conversation at any point.

It’s also a worthy inclusion on peoples’ Spooky Season Movie Watchlist for the plot, the score, and the long, sweeping camera shots that effectively sustain the tension throughout the movie. It’s incredibly effective in the first half-hour when the audience can’t see the creature. It also puts the viewer in Jay’s shoes. They start to see the creature when she sees it. The best shot is a long take that circles a high school hallway. Viewers can see the creature slowly walking towards an unaware Jay. It is, for lack of a better word, spooky.