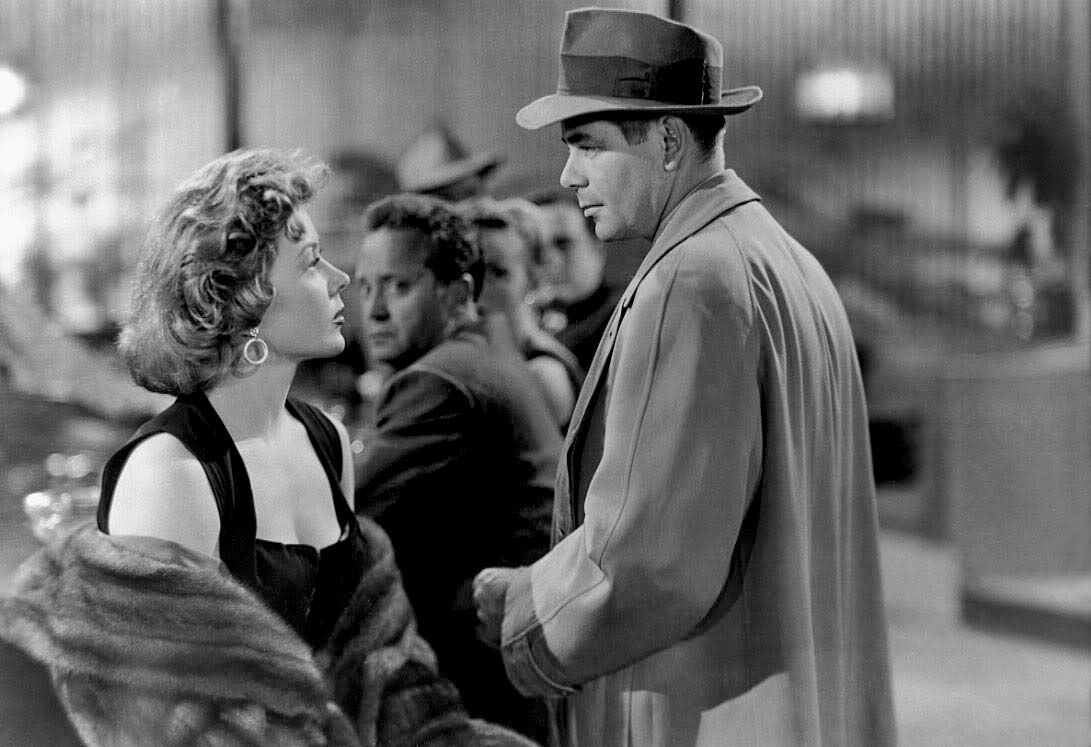 Opening with a bang, Fritz Lang’s The Big Heat begins with a carefully placed overhead shot of a hand claiming a small pistol resting atop a fine desk. An off-screen gunshot erupts in the soundtrack, followed by the body of a man crumpling onto the desk, lifeless. His wife (Jeanette Nolan), stunned by the event, notices an envelope on the table addressed to the district attorney, which she chooses to hide after reading its contents. It turns out the man who committed suicide was Tom Duncan, a cop. Det. Dave Bannion (Glen Ford) is commissioned with investigating the reasons behind his former colleague’s death wish. Perplexed as to the circumstances behind the suicide, information comes to light that may suggest foul play, especially when an informant (Dorothy Green) turns up dead the next morning. The more Det. Bannion marches forward with his investigation, the more he fears a massive cover-up from within the department.

The Big Heat is one of Director Fritz Lang’s latter critical hits. After striking a chord and the imagination of cinephiles in Germany with unforgettable gems like Metropolis and M, he subsequently flexed his filmmaking muscles in Hollywood, often with noir, a genre that clearly spoke to his fascination with the power struggle between individuals, be they morally justified in their actions or not, and the institutions that negate their personal progress. In M, it is the judicial branch that halts the protagonist’s perverted inhibitions, albeit in a highly dramatic fashion. In Metropolis, it is the highest level of society’s socioeconomic pyramidal structure that clamps down on the downtrodden proletariat. The Big Heat presents a more nuanced if no less recognizable issue: collusion amongst the criminal underworld and law enforcement.

Police corruption is not a new topic although it may take on a multitude of forms. Nefarious alliances between police and rich crime lords who can keep the former in their pocket is a favourite starting point for a number of police thrillers. The Big Heat employs the same idea and marries it to a couple of tangential realities that can sprout from it. First, is the suffering inflicted on the family of a cop who remains steadfast as David in the face of Goliath. Second is the risk incurred by pawns in the system the leaders deem to no longer be of any use or who choose to rebel. By having each aspect bleed into one another, director Lang and screenwriter Boehm weave a tale that can actually have its cake and eat it too. It is partly a revenge film, partly a scathing commentary on the weak backbone of those who bend in the face of blackmail, and partly an unforgiving look at treachery within the underworld itself. Lang’s film has a much more organically multifaceted personality than a myriad of other movies that fall under the same umbrella.

The protagonist’s motivation is increasingly layered, the more corruption’s vile tentacles exact their far-reaching pressure; one never overshadowing the others. In a fascinating display of lucidity, the appalling death of Bannion’s wife (Jocelyn Brando, charming and headstrong in her small role) does not  ignite apoplectic rage alone. What results is a more interesting and telling of the detective’s psyche: resolute, methodical focus with one eye always set on the larger picture, that being his organization’s failure to remain upstanding. The accidental assassination of his wife sparks an additional flame within him, yet his implacable misgivings for his colleague’s misbehavior and the gangsters, led by Mike Legana (Alexander Scourby), who parade in their faux high society majesty, remains his focal point

In the second half, a character that had been mostly relegated to the background, Debby Marsh (Gloria Grahame), main squeeze of gangster Vince Stone (Lee Marvin), comes to the forefront in an important way. Under the suspicion that Debby has spent an evening of lovemaking with Bannion, an enraged Stone tosses scalding coffee onto her face, forever scarring her. From there, she and Bannion form a bond of sorts. The detective still mourns the loss of his wife and it would be incorrect to assume that the two outcasts would ever make a good pair, yet their unfortunate fates bring them together in a touchingly unorthodox way. Debby opens up, wanting to know about Bannion’s wife and evidently sorry about the latter fate as well as her poorly invested time with criminals, time that clearly paid no dividends. Both Ford and Grahame play off one another effortlessly as a tandem that, rather than gravitate towards each other with sparks flying, provides each with a small level of comfort in these trying times.

Lang deftly plays on each of these three ideas, but of course, he is supported by an able cast. As already stated, Ford and Grahame excel in their respective roles, but several other players also put in quality work, such as Marvin as the sleazy second-in-command to Legana’s operation. He injects such gleeful misogyny into the performance, it is hard not to be repulsed by a man who presents himself as tough and who takes out his frustrations on the wrong people and in the most hideous of ways. Jeanette Nolan is as cold and calculating as can be as the widowed Duncan who, in the wake of her husband giving up on life, chooses not to give up on her allegiance to Legana’s crew by remaining quiet on her late hubby’s wayward inclinations. Of course, there is Alexander Scourby as Legana, who remains predominantly in the background for the better part of the picture, although he few appearances provide the actor with the opportunity to indulge in some fun, typically boastful gangster ringleader posing.

The Big Heat features one of the more mature stories to be found in noir. It deals with some extremely heavy material, some of which would understandably encourage its characters to give in to testosterone and rage, yet preserves an impressive air of level-headedness. The emotions are there, yet true to the director’s impeccable storytelling tastes, they lend the picture some additional pathos and, in its final moments, bittersweetness.  Chalk up The Big Heat as a big win.