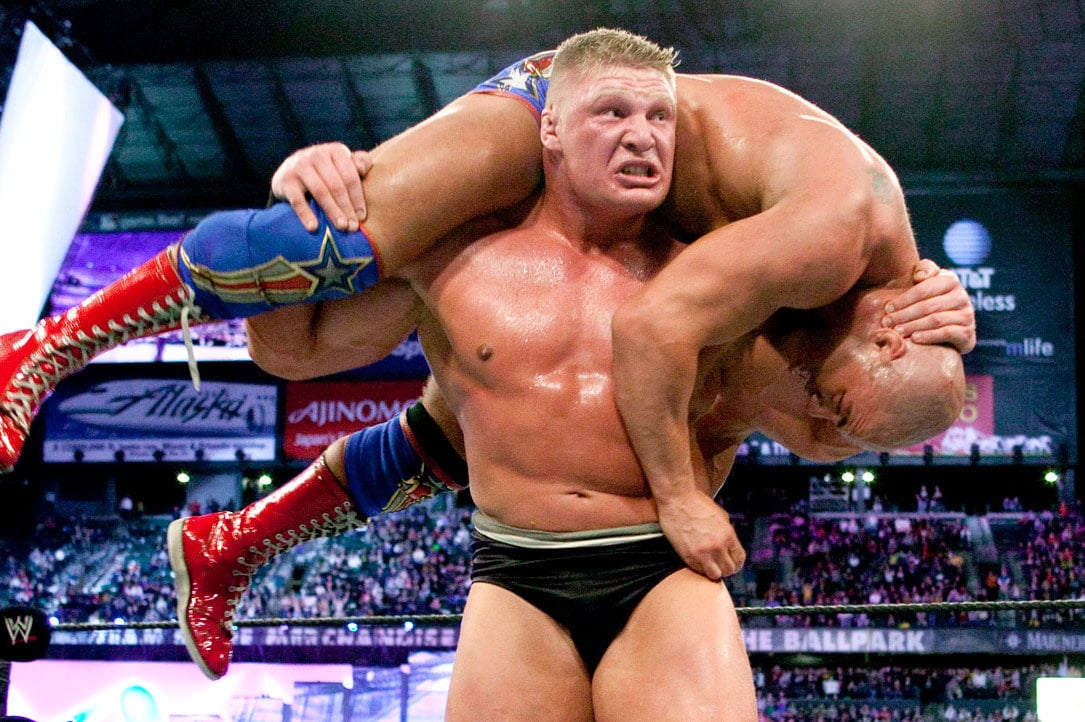 WrestleMania 19 is remembered fondly for many things: The pay-per-view was the first WrestleMania to be promoted under the WWE name and the first to have taken place after the WWE brand extension. It featured a classic match between Shawn Michaels and Chris Jericho and marked ‘Stone Cold’ Steve Austin’s last official match before his retirement from in-ring performance due to injuries. There were other memorable matches such as Rey Mysterio vs. Matt Hardy for the Cruiserweight Championship and a triple threat WWE Tag Team Championship match between the team of Rhyno and Chris Benoit, against the team of Los Guerreros (Chavo and Eddie Guerrero), and the champions, Team Angle (Shelton Benjamin and Charlie Haas). These are all great matches but WrestleMania 19 is remembered most for the main event that featured Kurt Angle and Brock Lesnar, two of the most accomplished athletes to ever join WWE who put on a show for the ages.

After just one year on the main roster, Lesnar then dubbed “The Next Big Thing,” had climbed the proverbial mountain, defeating just about everyone who stepped in his way. He was one of the hottest wrestlers in the world; already winning the WWE Undisputed Championship against The Rock at SummerSlam 2002 and later, he showed outstanding perseverance when winning the 2003 Royal Rumble and earning the right to challenge for Kurt Angle for the WWE Championship. The stage was set and Lesnar was on his way to wrestle the man who was an inspiration to him growing up.

Lesnar was on a streak of dominance ever since he made his debut in 2002 and Wrestlemania 19 marked the first the Beast from the East would wrestle a match at the Showcase of the Immortals. While Brock Lesnar was already a decorated athlete with an impressive resume of collegiate wrestling accomplishments, he had yet to win the biggest prize in professional wrestling on the biggest stage. Angle on the other hand, had done it all, winning NCAA Division I All-American three times before winning a gold medal at the 1996 Summer Olympics with a broken neck. In the WWE, Angle was no stranger to Wrestlemania and was currently sitting at the top with the WWE Championship Title wrapped around his waist.

Thanks to a heated feud between the two men, the match was highly anticipated— but I don’t think anyone expected it to be as good as it was. Aside from the in-ring performance which I’ll get to soon, what made this match particularly great is that despite being an American hero with a diligent rulebook that followed “the three I’s: Intensity, Integrity, and Intelligence,” Angle went into the match as the heel while Lesnar entered as the babyface. And to prove himself as the undisputed best, Lesnar had to beat his role model and prove to pundits that he deserved the accolades he received.

In addition to this, WWE wanted to be sure that both men were on equal grounds in order to deliver the best match possible. Prior to Wrestlemania 19, Stephanie McMahon included a stipulation that stated Angle would lose his title if he was counted out, disqualified, or if anyone interfered on his behalf. This meant that the Olympic champ couldn’t rely on any help from Team Angle and would have to beat Lesnar, fair and square. Much like the Iron Man match from WrestleMania XII, Lesnar and Angle worked a technical wrestling masterpiece (apart from one major hiccup which I’ll get to later). The match started with Lesnar and Angle wrestling back and forth on the mat before both men unleashed a flurry of powerful German suplexes with Lesnar tossing Angle around like a rag doll on his back. Lesnar would then attempt an F-5 on Angle only Angle would counter it into an Ankle Lock, that Lesnar would escape out of.

Though he stayed within the rules in order to make sure he wouldn’t be disqualified, Angle’s use of underhanded tactics soon gained him the advantage over Lesnar, repeatedly attacking Lesnar’s injured midsection before delivering a devastating suplex and sending Lesnar smashing onto the top turnbuckle which further aggravated Lesnar’s ribs. The match featured plenty of counters, more suplexes, a couple of Angle Slams and Lesnar’s finisher, the F-5— but the most unforgettable moment came when Lesnar climbed to the top rope and botched a Shooting Star Press on Angle, which Angle covered for by pinning Lesnar for a near-fall.

Lesnar’s unexpected Shooting Star Press (which he, unfortunately, couldn’t connect) is one of the scariest moments in any Wrestlemania. It was so bad, in fact, Brock Lesnar suffered one of the worst injuries in WWE history by landing directly on his head and neck, suffering what would later be diagnosed as a major concussion.

When talking to WrestlingInc about the Shooting Star Press to end the match, Angle would take some of the blame as he recommended it would be a great way for Brock to end the show in spectacular fashion saying; “That was my idea, I will take responsibility for Brock doing that. At the time I had to leave (WWE), it really wasn’t in the plans for me to drop the title at WrestleMania. I had suffered a broken neck and was going to have surgery, so I wanted to do something that people would remember”.

Recalling the moment that night, Lesnar said, as per Pro Wrestling Stories: “There I stood, on the top rope, both arms raised in triumph, my head back, letting the crowd take it all in…and then I launched the Shooting Star Press. Every wrestling fan knows what happened next. My boot slipped off the wet rope…I saw the people, I saw the top of the arena, I saw the mat coming and then I saw Kurt’s singlet, so I thought I was ok. I under-rotated, crashed in spectacular fashion, and gave myself a massive concussion. I damn near broke my neck.”

In the end, an exhausted and battered Lesnar hit a third F-5 before pinning Angle and winning the WWE Championship for the second time. Despite their rivalry, the two competitors shook hands and hugged after the match in a display of mutual respect.

By the time WrestleMania 19 rolled around, Lesnar had only been on the main roster for one year, and yet he along with Kurt Angle gave their absolute best and delivered one of the greatest matches in WrestleMania history. The match is a true classic and solidified Lesnar as the most dominant big man in the game. 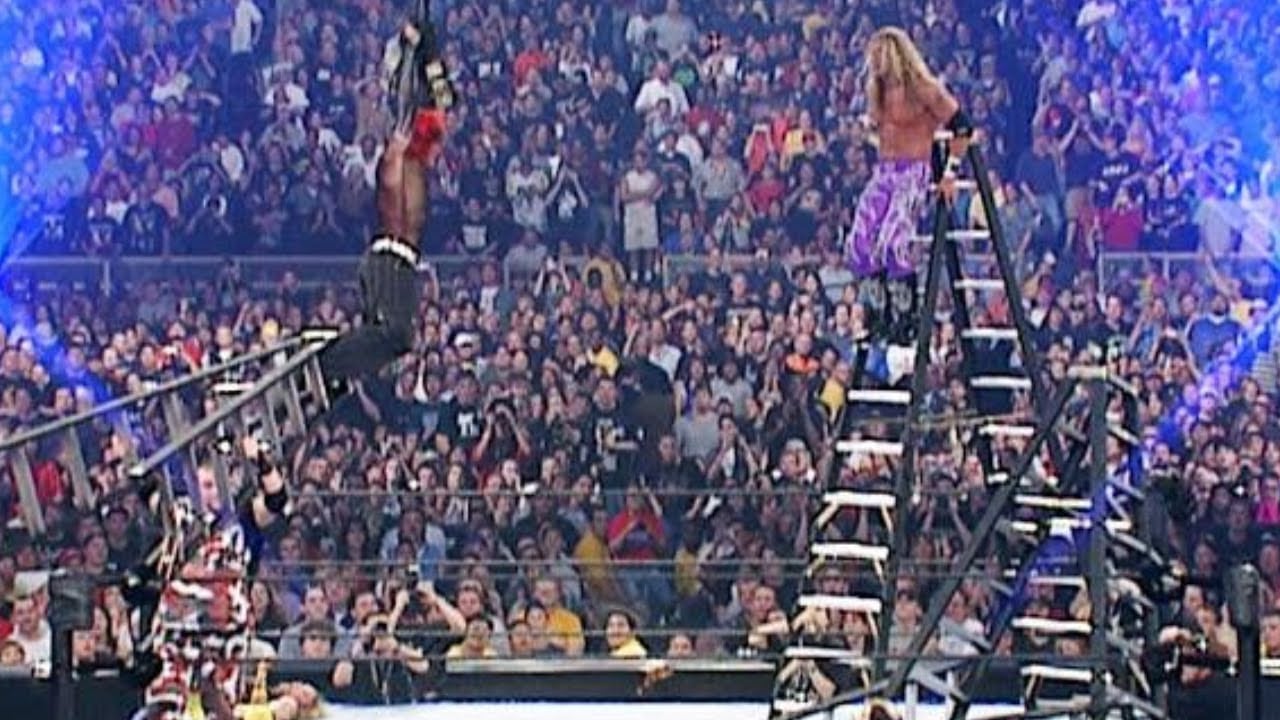 The Best Wrestlemania Matches: The Dudley Boyz vs. Edge and Christian vs. The Hardy Boyz

The Greatest Wrestlemania Matches of All Time WrestleMania X7: TLC Tag Team Championship In 2001, WWE presented WrestleMania X-Seven from the Astrodome in Houston,... 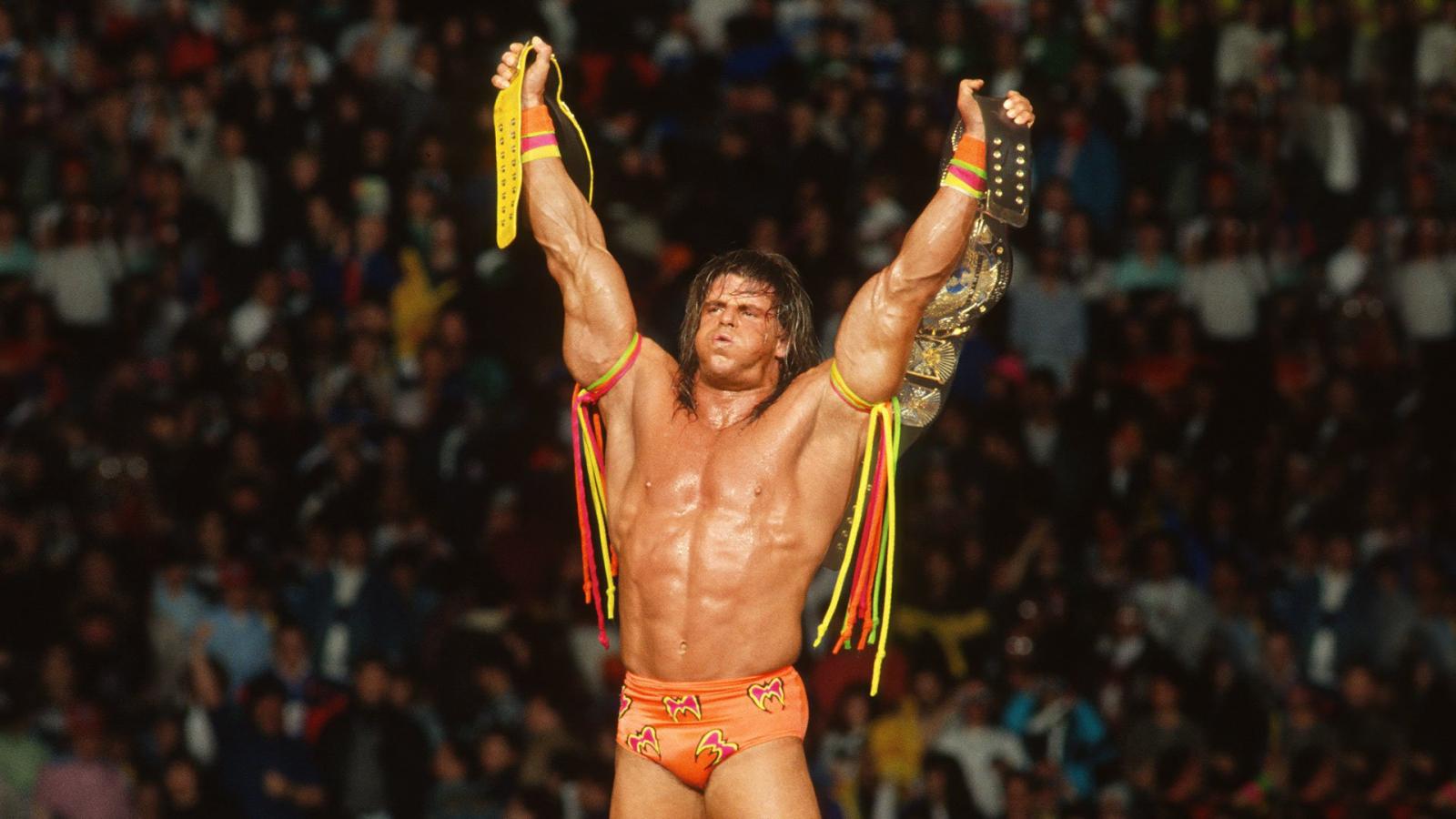 The Greatest Wrestlemania Matches of All Time WrestleMania VI: Champion vs. Champion History was made in 1990 when The Ultimate Warrior defeated Hulk Hogan,... 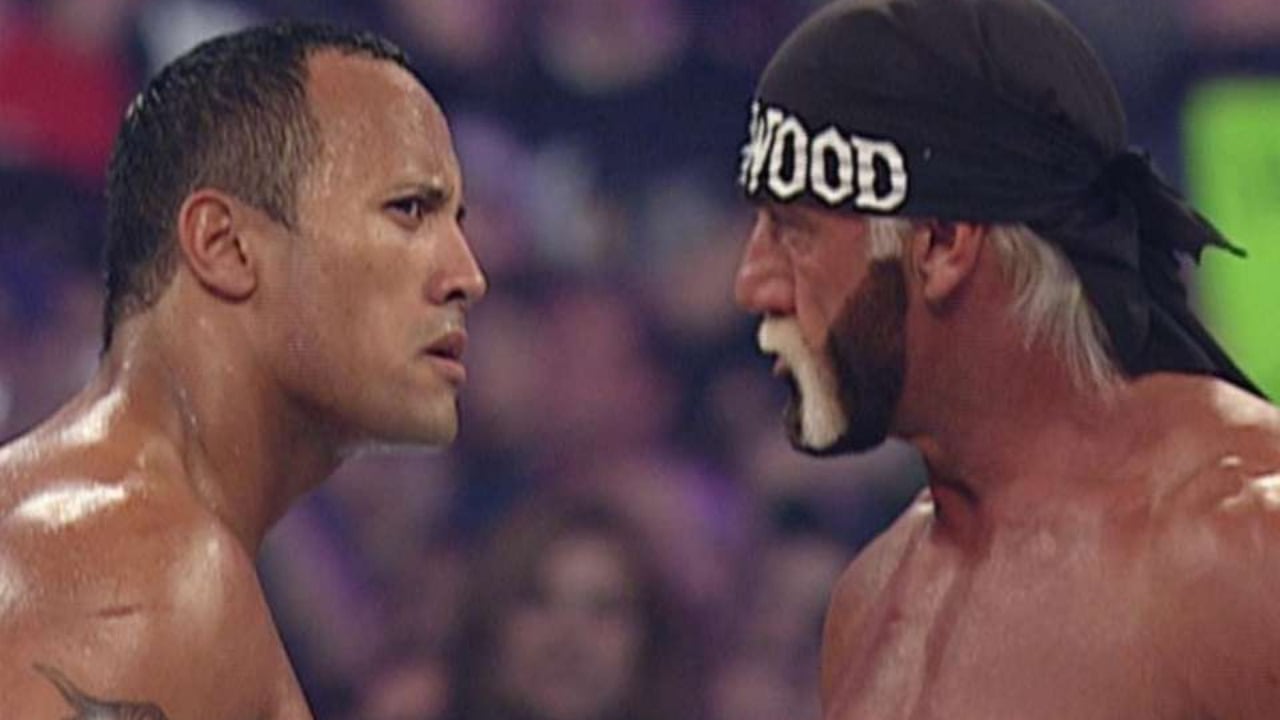 The Best Wrestlemania Matches: Remembering The Rock vs. Hulk Hogan

The Greatest Wrestlemania Matches of All Time WrestleMania X8: Icon vs. Icon 68,237 fans packed into the SkyDome in Toronto, Ontario to watch WrestleMania... 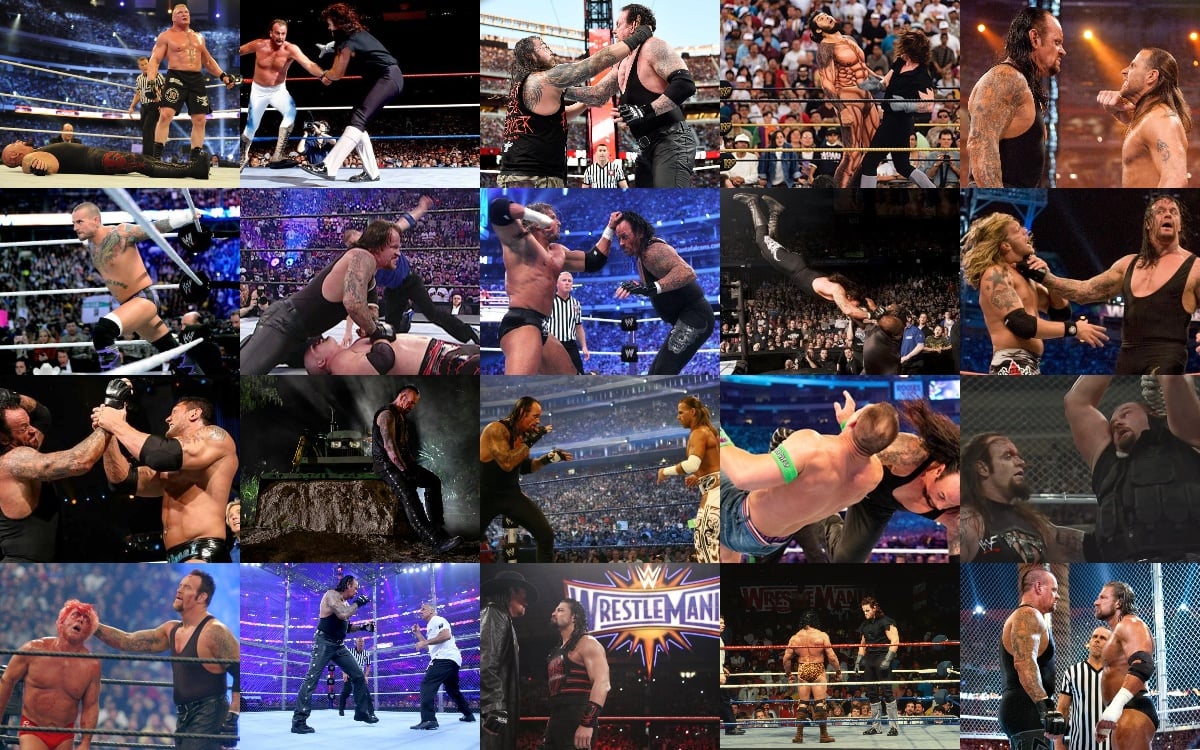 Ranking Undertaker’s WrestleMania Matches Wrestlemania and the Undertaker go together like the British and pessimism. ‘Taker’s legacy will forever be associated with ‘The Granddaddy of...