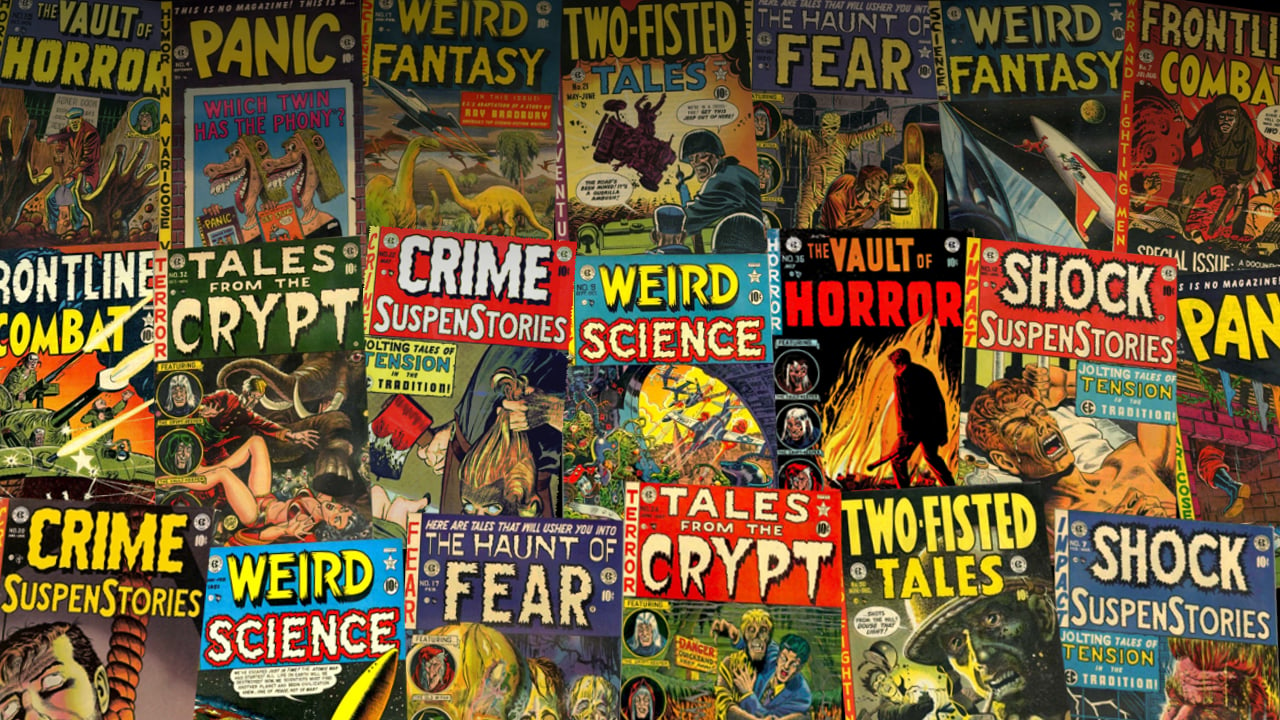 When Max Gaines died in 1947 from a boating accident, he left the family business, EC Comics Company (which stood for alternately Entertaining Comics and Educational Comics), to his son William “Bill” Gaines. Rather than follow in his father’s footsteps and publish illustrated bible adaptations for the little ones, he instead published graphic horror, crime, and science fiction comics that, keeping true to the company name, were both entertaining and educational (nearly all stories had a moral and the evildoer always got his comeuppance in the end). Titles included Tales from the Crypt, Vault of Horror, Weird Science, Weird Fantasy, Shock SuspenStories, Two Fisted Tales, and a little humor book called Mad Magazine. Crude and violent, it was only a matter of time before parental outrage would bubble and burst into a torrent of censorship. In 1954 the now-infamous congressional hearings over juvenile delinquency and their relation to comic books (led by Dr. Fredric Wertham as the chief prosecutor and “expert”) nearly ended the medium of comic books as we know it. Strict and often ludicrous rules were placed by the newly appointed Comics Code Authority (CCA) that practically forced Gaines to cease publication of all of his titles except for Mad (which wasn’t a target for the CCA considered a magazine and not a comic).

Yet as one looks back on the comics published by EC, one fails to see what Wertham saw as so detestable and morally corruptible. Sure there’s murder, reanimated corpses, demons, beheadings, and psycho killers in Santa costumes, but all that vibrantly colored violence serves a higher purpose other than to shock and makes one gag. The story may be about a rotting zombie seeking revenge on the surface (and on the cover), but deep down in its roots, it is a morality tale that teaches kids a valuable lesson: every bad deed does not go unpunished. In this, they are perfectly suited as the modern-day successor to The Twilight Zone and The Brothers Grimm fables of old.

Here then, 10 of my favorite EC stories of all time.

After surviving a shipwreck, a man is washed ashore on a deserted island with nothing to eat. He must fend for himself in this harsh environment, but to make matters worse, he must also compete for food with a hungry and clever little rat that also escaped the doomed ship. The rat and man then engage in a paranoid power struggle as they vie for what little food they can find, ultimately leading them to see each other as prey. Though you may be rooting for the rat by the story’s end, the man’s actions remain perfectly justifiable given the circumstances, this being one of those rare EC stories where there are no clear cut “good” and “bad” guys; the characters are just acting out of survival. Featuring some of Jack Davis’ most gruesomely detailed art (he is a master of the facial expression), the story is entertaining and often darkly humorous, look at what happens when humans lose their spot at the top of the food chain and are brought down to an animal’s level. Bestiality ensues…

A nice little claustrophobic tale of extreme paranoia, “Maniac at Large” tells the tale of a mousy librarian who works the night shift at the local lender of books (who knew libraries were open this late). The librarian becomes fearful when she hears of an escaped killer who has seven victims under his belt. The fear turns to paranoia as she thinks that anyone of the patrons or coworkers at the library might be the maniac, and she fears that she may become victim number eight. While most EC artwork is free-flowing and violent, George Evans’ art on “Maniac” is constrained and tight. The panels seem to echo the claustrophobic and paranoid feelings of the librarian, and the reader can almost choke on the dark shadows that seem to grow as the librarian descends further into a paranoid delusion.

This one is a doozy. Noted for being one of the first media portrayals of the true evils of Nazism (the media at the time didn’t want to go near the horrors of the Holocaust), “Mater Race” concerns itself with Carl Reissman who, while riding the subway, reminisces about the atrocities he saw while in a Nazi death camp. His memories are interrupted when a black-clad, emaciated figure, whom Reissman recognizes as the person who swore vengeance on him for escaping the camp, steps onto the tram. When the man spots Reissman, he keeps true to his words and begins to chase after him. This being an EC comic, the inevitable twist in the ending arrives when it is revealed that Reissman is the true villain, having been a commanding officer at the camp who fled when the war ended, and the gaunt figure was a prisoner at Reissman’s cruel disposal. Aside from the subject matter, the story has gained cult status due to Bernard Krigstein’s interesting approach to comic book art. Having originally come from a painting background, Krigstein felt constrained by the comic book style and page limitations he was given. With permission from Bill Gaines, he was able to make the originally four-page story into an eight-pager and went wild with interesting panel layouts and experimentation. This artistic freedom led to one of the most shocking, visceral, and poignant comic book stories ever produced.

7. …And All Through the House…

Ah, Christmas time, a time for rejoicing and family, a time for majors and angels. It isn’t quite a silent night for one desperate housewife who murders her husband on Christmas Eve while her daughter is asleep upstairs. As she tries to dispose of the body, she encounters an escaped maniac (the best kind) dressed up in a Santa outfit. She can’t call the cops, as she’d just committed murder, so she decides to board up the windows and barricade herself inside while trying to cover up her tracks. A ghoulish masterpiece that features the classic EC staple of having the rotten protagonist getting their just desserts at the end (this time curtsy of the woman’s naive daughter), proving that crime doesn’t pay.

A bigoted father is disgusted when he learns that his daughter has married a Mexican. After he fails to convince her to leave her husband, the father rounds up a local posse to help him lynch his son-in-law and teach him a lesson he soon won’t forget. After abducting and killing what they thought was the Mexican, he walks in on them. Confused, the father turns to see that he has killed his daughter, who the mob had unknowingly abducted while she was waiting for her husband in the dark at home. Justice doesn’t come swifter than this…

Set in a Korean village, this heartbreaking story tells the tale of a peaceful little family as they go about their quiet lives in raising their newborn son. All is well for the first five years of the boy’s life, but then suddenly, a soldier from a far-off land called America comes to their village and demolishes their home with bombs and ammunition holes. The story ends with the little boy cradling his dead mom in his little hands as he uselessly calls for his father, who lies dead a couple of yards away. When most frontline war stories were marketed as peachy, keen, and justified, EC ‘s line of war comics (which included Combat and Two-Fisted Tales) told the horrifying truth to readers with a grain of salt, showing the horror war can bring with it.

4. Horror Beneath the streets!

At last, the truth of how the horror hosts of EC comics came to be! After finishing up a story for the schmaltzy Modern Love late one night, Bill Gaines and Al Feldstein encounter The Old Witch, who chases them down into a sewer where they meet the Crypt Keeper and the Vault Keeper, who holds them prisoner and “persuades” them to sign three contracts that would get them their own comic book deals to escape. A fun tongue-firmly-in-cheek little ditty that ludicrously breaks the fourth wall, “Horror” is a perfect showcase for EC’s penchant for black humor. Those ghoul hosts sure drive a hard bargain, though…

A father’s undying love for his son is at the heart of this devious little crime caper by Graham Ingels. The son in question is a rotten little miscreant who is on the run from the cops after he commits a murder. His naïve father, who lives under the delusion that his son is nothing but a “good boy,” hides him in the closet when the cops ask questions at his house. When the police check the closet in search of the crook, the father takes a gun and shoots numerous holes through the door to prove that no one is in there. After the cops leave, the man hugs his dead son’s body and tearfully tells him to be good and just. A heartbreaking story that bears a few resemblances to Poe’s ending to “The Black Cat,” “Good Boy” is a surprisingly tender look at the blindness that those in love suffer from.

An ingenious little tale about two gamblers who hold extreme grudges upon each other. Their hatred is so venomous that they decide to hold a game of “Chop Poker” where every time they lose, a limb or digit is hacked off. Eventually, it gets to the point where both men have had both arms and legs entirely cut off, and the game is at a draw. Not ones to take losing lightly, they are last seen in the hospital ward playing a game of chess with their mouths in lieu of their appendages, which are nothing more than bandaged stumps.

A suited astronaut, emissary of the Galactic Republic, pays a visit to Cybrinia, a planet inhabited by robots. While checking the place out, the astronaut discovers that the robots have been separated into two classes, one made up of blue robots, the other orange. While both blue and orange robots are identical in every way except metal color, the blues are deemed inferior and thus are underprivileged and have fewer rights than the orange. Seeing this blatant bigotry, the astronaut tells the Galactic Republic that Cybrinia is unsuitable to be included in their republic. As he says this, the astronaut removes his helmet, and for the first time, we can see what he looks like; he is a black man. An early proponent of black rights and anti-racism, “Judgment Day” would lead to heaps of controversy with the Comics Code Authority when it was reprinted in Incredible Science Fiction #33 (Feb 1956). The CCA balked at the last panel, where it was revealed that the astronaut was black. They ordered that it be changed or excised completely, yet Gaines and company remained steady. Eventually, the story ran uncensored in ISF 33, and we wouldn’t have it any other way.