‘Teen Titans Go! To the Movie’ – A Summer Mash-Up of Juvenile Humor and Self-Referential Wit

When Cartoon Network took the characters and actors from their beloved 2003 superhero dramedy series Teen Titans and revamped them into Looney Tune-style goofballs, fans were livid. However, that wacky series spawned a new fandom with an admittedly younger demographic. Needless to say, the news of a theatrical release of the Teen Titans Go! series did not bode well with loyalists to the original series.

But hear me out.

Much like 2017’s The LEGO Batman Movie, Warner Bros’ Teen Titans Go! To the Movies is an unexpectedly intelligent film underneath the fart jokes and musical numbers, and delightful surprise to critics and parents being dragged to the theater by their kids. Combining self-awareness, meta-humor, irreverence, and a freakin’ sweet eighties jam, this film will make even the haters crack a smile.

The story focuses on the superhero team’s arrogant yet insecure leader Robin, and his obsession with being respected among his caped kinsmen. After an embarrassing incident at a red carpet event, he realizes the answers to all his problems: he needs his own superhero movie. The film takes place in a world where superhero movies not only exist but star the actual heroes themselves. After an ‘upbeat inspirational song about life’ sung by his supportive teammates and a bizarre Michael Bolton cameo, the Teen Titans set off for Hollywood to demand that Robin gets the movie he deserves.

Overall, Teen Titans Go! To the Movies is one of the rare triumphs the DC Universe has had in a while.

However, there are more pressing issues than the road trip hijinks. A brutal masked mercenary by the name of Slade (voiced by Will Arnett, who oddly voiced Batman in the LEGO Batman Movie) is determined to steal a powerful crystal while continuously outsmarting, the not-so-bright, Titans. The film manages to slip in a few Deadpool jokes at his expense, poking fun at the fact that his original design was, in fact, the inspiration for Deadpool. While intimidating in appearance, Slade does not stray too far away from the absurd humor of the film. 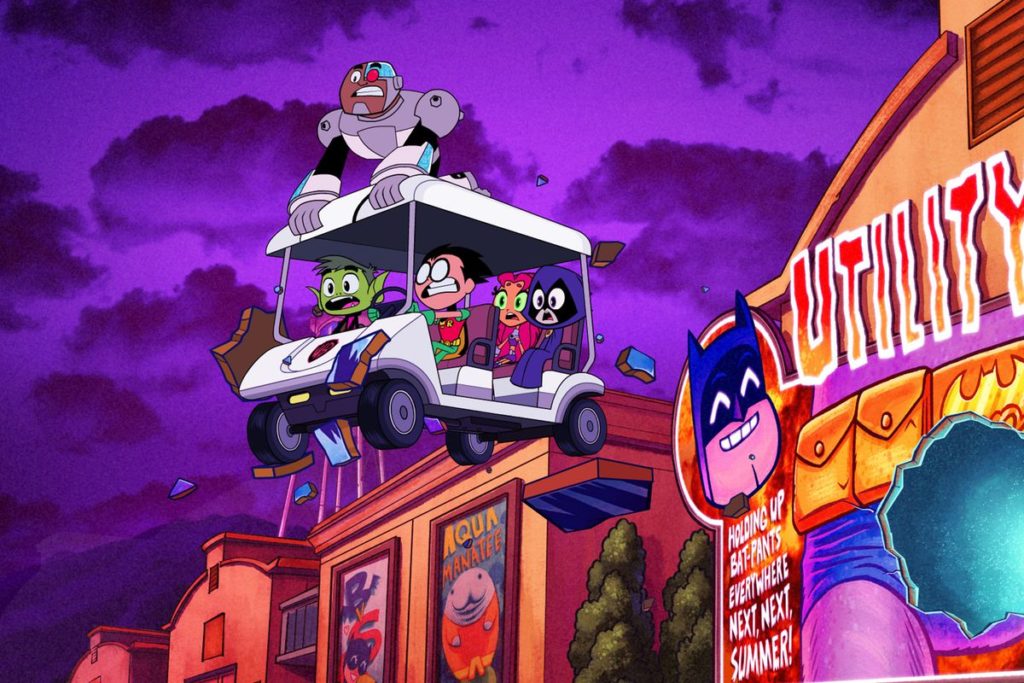 The Titans go to great lengths to ensure Robin’s movie deal, even going so far as traveling back in time to stop other superhero origins from taking place, in one the film’s funniest sequences. Eventually, Robin does get close to getting everything he wants but has to decide if his loyalty to himself is more important than that of his team. The inevitable reveal of the film is pretty easy to spot from a mile away, but the villain’s motive is unique to the world of the film and certainly goes out of its way to critique the culture’s obsession with superhero films.

Overall, Teen Titans Go! To the Movies is one of the rare triumphs the DC Universe has had in a while. DC certainly strives in its animated works including Teen Titans, Batman: The Animated Series, the many straight-to-video releases, and Warner Bros.’ last theatrical release, the criminally underrated 1993 Batman: Mask of the Phantasm. A lot of people look down on Teen Titans Go! for being a juvenile, lowbrow, ultimately inferior version of a strong dramatic predecessor. However, comparing Teen Titans and Teen Titans Go! is a lot like comparing Adam West’s Batman to the Dark Knight Trilogy. They’re the same source material but completely different genres. Teen Titans Go! To the Movies culminates the best it has to offer with self-awareness, self-deprecation, and a dash of outlandish chaos. It is the summer superhero film we didn’t know we needed.