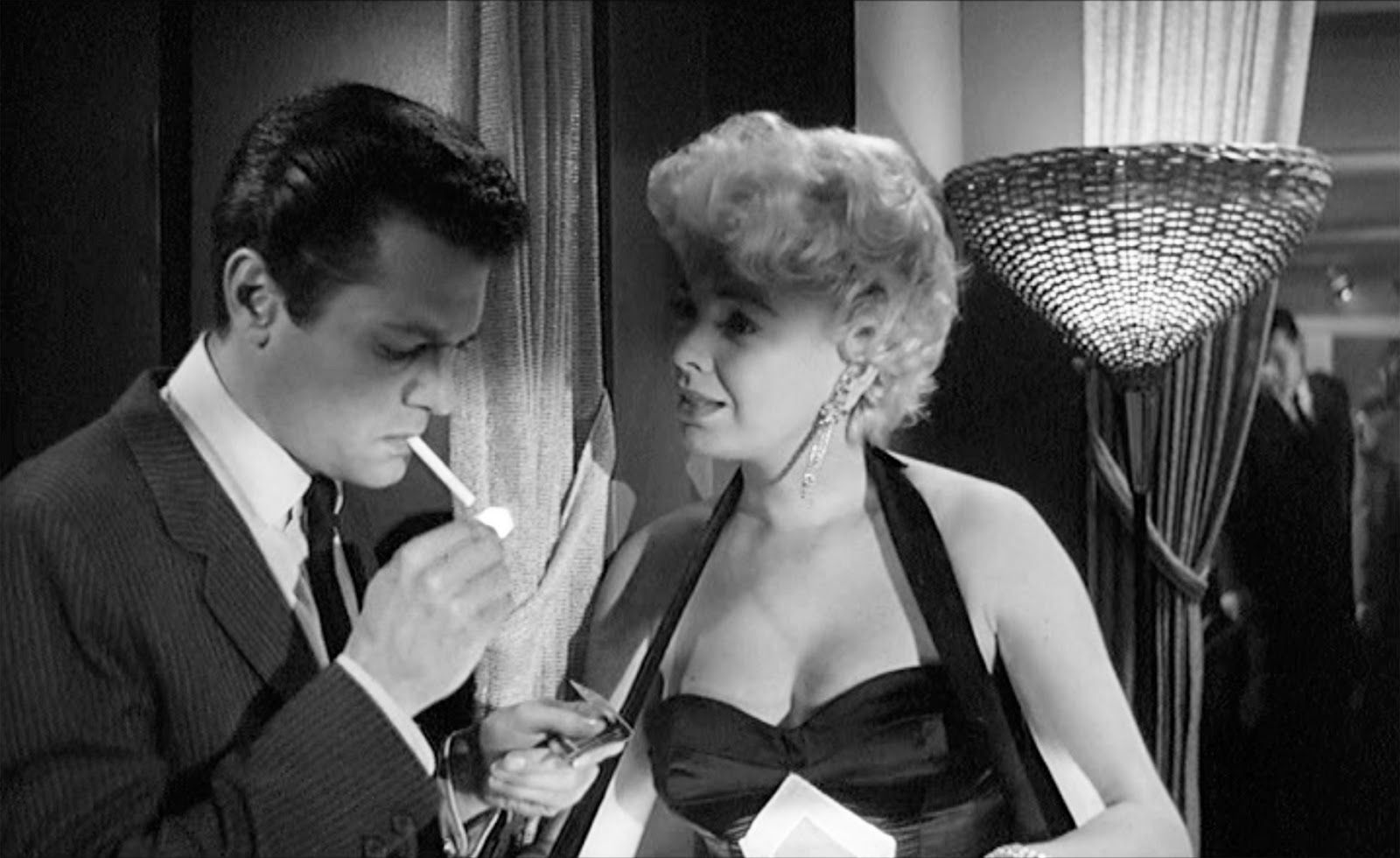 For press agents and important newspaper columnists in the 1950s, Manhattan is the heart of the jungle. With stories floating out and about from Broadway, the visits of senators, or even the domain of midlevel musical artists, the Big Apple is the hubbub of gossip and breathtaking opinion pieces, a virtual goldmine for press agent Sidney Falco (Tony Curtis) and widely read columnist J. J. Hunsecker (Burt Lancaster). The latter’s every written word forms public opinion like that of few other writers, a power he relishes, a power that inflates his already considerable ego. The former is the sewer rat who digs up any bit of information he can on just about anything that sells a newspaper…and a whole lot of gossip can sell a newspaper. His latest assignment, decreed by his dictatorial ally J.J., is to somehow cause a rift between his partner’s younger sister Susan (Susan Harrison) and her current lover, clean-cut, wholesome guitarist Steve Dallas (Steve Milner). Be it via the written word or other nefarious means, the over-protective J.J. will stop at nothing to prevent a marriage and use Sidney in any capacity to achieve that goal.

Alexander Mackendrick’s Sweet Smell of Success is one of the most visceral, terrifically exciting, perversely fascinating, energy-charged film noirs ever made and yet features nary a gangster, fired guns, death, or crime in the traditional sense. In fact, calling it a noir is maybe something of a stretch given that it deals with subject matter rarely explored within the genre, yet the presence of human mischief, misguided altruism, and ferocious anti-heroes is unmistakable, to say nothing of James Wong Howe’s gorgeous cinematography that falls in line with some of the very best expressionistic efforts noir is famous for. Crooked cops are substituted for crooked newspapermen (in fairness, there is a crooked cop with a small supporting role), death by bullets is replaced with death at the tip of a columnist’s pencil, and a femme fatale is re-imagined as a handsome, clever, but unquestionably untrustworthy and self-serving New York male press agent. It soon becomes abundantly clear that the lack of many obvious parts that make up a noir is totally inconsequential. Mackendrick and company have made a near-perfect film about filthy people feeding off their own delusional ambitions to achieve as much influence and power as humanly possible given their trade. Consequences on the lives of other people be damned.

Watching Sweet Smell of Success is a tricky venture for those giving it a spin for the first time. The film takes a few minutes to make clear what the characters’ roles are, dropping hints that in hindsight are quite clear but at first glance could mean anything. The opening 10-15 minutes see an alarmingly energetic, bustling Sidney Falco rampage in and out of various Manhattan nightclubs, talking to characters for a few seconds about this and that; entering his office; sarcastically barking orders at his personal secretary (Jeff Donnell) before finally meeting the mysterious, oft-referenced J.J., whose actual profession the viewer might still not be clear on at first. The pacing never lets up, even after the major players have been established, with Sidney paying a visit and sneakily getting still more characters to help him in his quest to squash the Susan-Steve romance, including whoring out his acquaintance Rita (Barbara Nichols), a cigarette girl hustling at a nightclub. Seeing as part of the fun, relatively speaking, is how Sidney plays his pawns, there’s no point in spoiling his machinations, which are unfathomably terrible; he has the strategy of an egomaniac, a duplicitous, single-minded shark. Sidney is essentially the poison poorly disguised by charm and a grin to J.J.’s unequivocally antagonistic, cold persona, both in person and through his articles. They are the worst people imaginable, people with far more influence over others than they should have any right to own. That said, on the one hand, people read Hunsecker’s words on a daily basis, and on the other, most people who want to make it somewhere in the New York art world need a press agent.

Further muddying the waters is the fact that, realistically, Hunsecker cares very little for Sidney, using him more as a lap dog than a friend. It is he who is truly in a position of power, not Sidney. At the start of the picture, the press agent is in dire financial straits, desperate for some attention from his newspapermen connections. Seemingly, his longest-running association is with J.J., which is why he is so intent on seeking him for some publication space. Hunsecker is curt, unreceptive to pleas from those he views as beneath him, and extremely demanding when doing business. Sidney understands his plight, however, and knows that his chance at something better, such a column all to himself, can only come to fruition by falling under Hunsecker’s good graces. People either fear his influence or, for some god-forsaken reason, eat his every word like gospel. Curtis and Lancaster, playing opposites of the same coin, are both magnetic on their own but doubly so when sharing scenes together. Curtis especially, known at that point for playing charming heartthrobs, digs deep into himself and comes up with a dark and twisted persona he can. Sidney is despicable vermin played with exemplary gusto. Who is worse in the end, the man who wields the axe or the man who knows the danger but deludes himself into thinking he is safe by gravitating towards it?

Adapted from an Ernest Lehman novella, the dialogue in Sweet Smell of Success is absolutely searing. Often delivered at the same high tempo the characters live their lives, the exclamations and retorts spat by Sidney, J.J., and company are inventive, hilarious, and often represent the highest level of cynicism and contempt any self-respecting human being can utter. “You’re dead, son. Get yourself buried.” “My right hand hasn’t seen my left hand in 30 years.” “I’d take a bite out of you. You’re like a cookie full of arsenic.” The picture is chock-full of delicious pieces of dirty wit along the same lines. Such creative dialogue makes the movie all the more exciting, indicating that the viewer is dealing with people whose brains are thinking on a whole different level. If only they could use their smarts for nobler purposes.

A bit of work is required of the viewer to get comfortable with the world of Sweet Smell of Success. The days of people holding their breath for the next column in a newspaper are long dead. Hell, the days of people buying the newspaper are approaching extinction. Sweet Smell of Success, thanks in part to the fast pacing and rat-a-tat dialogue, can easily be lumped into that ambiguous category of films that get better upon repeat watches. Mackendrick offers up a wild, breathtaking vision where reputations are built, preserved, and destroyed in the worst way and often for the worst reasons. There may be no obvious signs of danger at face value, but viewers may still want to buckle up for a wild ride.

The Lady from Shanghai Suffers from Studio Tampering of its Time