Australia has long been in my top 5 fears of all time. A good amount of that has to do with the horror films that have come out of that country, primarily the terrifying and brutal Wolf Creek films. You can’t pay me enough to go to a place where everything there wants you dead — it just doesn’t seem meant for humans. Damien Power’s strong debut, Killing Ground, is another effective, sobering and violent entry into Australian horror. It’s an unforgiving work of violence that strangely ends up having much to say about our relationship to violence.

Killing Ground kicks off when a young couple, Ian (Ian Meadows) and Sam (Harriet Dyer), go camping in a secluded spot for the new year. Next to them is a recently-abandoned large orange tent, and when they look into where the previous inhabitants may have gone, a sick cycle of tension and brutality is ignited, as they are hunted by the two men responsible for what happened to the previous family: a chilling German (Aaron Pederson) and Chook (Aaron Glenane)

This film might have not worked in any other setting; there’s just something so foreboding and unforgiving about the Australian wilderness. It’s inherently threatening. Power and cinematographer Simon Chapman take hold of this aspect, using natural lighting to let the reality and immediacy of the terror sink in. The violence is extremely physical, and Power uses subtle mechanics to enhance the reality of it all. There’s a curious sense of minimalism in how Power shoots all of these awful things. In one brutal sequence among many, Power uses long takes and still camera placements in order to heighten the immediacy of what’s happening. This effect also induces a queasy feeling of powerlessness, as the static framing and minimal cuts indicate there is nothing we can do but watch.

Power skillfully weaves together three separate narratives — that of Sam and Ian, that of the family who occupied the orange tent, and that of the two killers that find their way back to the scene of their original crime to keep it covered up, crosscutting until the horrors of each morph into one as they all come together. It’s a unique method of telling the story, and one that ends up paying off big dividends as the narrative unfolds. Power puts a lot of confidence in this choice, and composed decision ends up subverting familiar territory, shifting the uneasy ground beneath the audience’s feet. 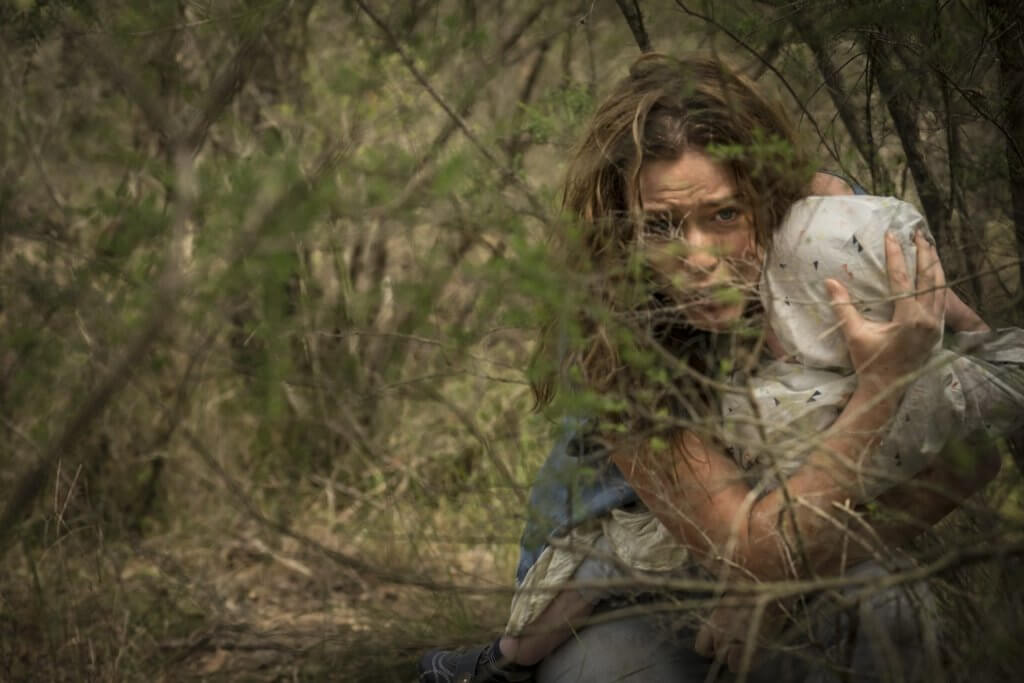 The twists and turns in Killing Ground feel fresher than expected, and that’s largely due to the character work done by Power and his cast. They keep the events human — flawed and reactionary. The ability to be in the moment is essential for horror and survival film, something this cast does so well. They are in the moment as human beings rather than the stereotypes we’ve all become accustomed to. Both Dyer and Meadows do good work in building humans we want to see live through this, creating a relationship and dynamic that elevates the material. Yet it’s the two killers who do the most captivating work. Pederson and Glenane both carry an air of menacing unpredictability; just the simple act of watching them on screen in even innocuous scenes feels tense. There’s a lived-in dynamic between the two (we don’t know much about their backstory), yet the way they interact gives us enough to draw our own conclusions. At points, however, you almost feel sympathetic for Glenane’s Chook — notice how Glenane slowly hesitates in one scene before committing a vile act, unsure of whether or not he wants to take things there. Glenane’s performance, no matter how terrifying he gets, is a reminder that most of the more terrifying monsters in our world are human.

Killing Ground is an extremely violent film with no qualms about how far it will take you, yet still feels sobering in how it presents its violence. There are images among the most vile I’ve ever seen on film, such that I might have hated this if it wasn’t so damn well made, if the violence didn’t feel somehow so poignant and physical. I thought I might be sick at more than one point. It reminds us that violence is pointless and random, and that no good can come of it, no matter how retributive. There’s not a single savage act that feels titillating, a curious feat for a film with so much of it. Killing Ground asks an interesting question as the credits roll: why do we recoil at some acts of violence on film but cheer at others? I don’t have the answer, and I’m not sure Power does either, but he does boldly ask the question.

Sundance 2017: ‘Wind River’ – Taylor Sheridan is a good writer, but not yet a good director