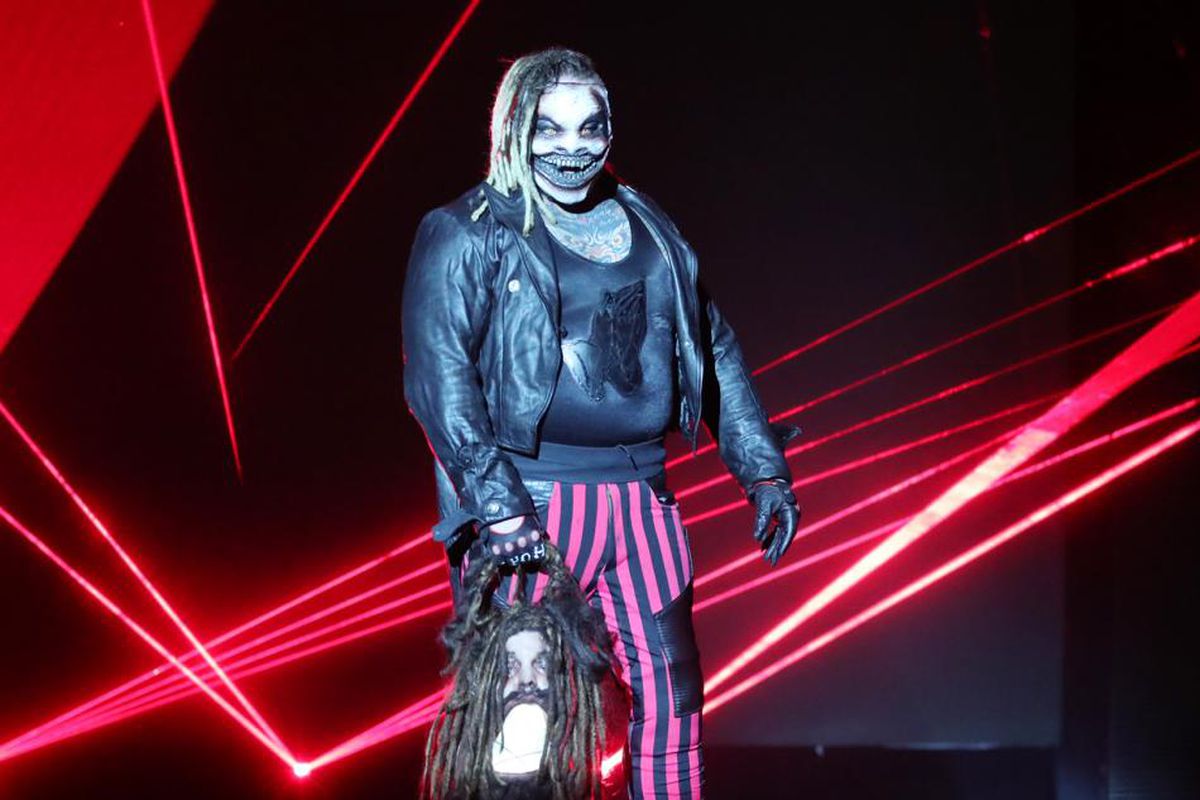 As one of WWE’s big four pay-per-views, SummerSlam plays a key role in all of their storylines. Regardless of what their promotions tell you, this is the event where the build to the next WrestleMania truly begins. And it actually held up reasonably well against TakeOver this year.

SummerSlam 2020 was no different, as a variety of rivalries ended, began, and advanced to the next level. What was overall a decent pay-per-view had its fair share of ups and downs. It did have more ups than downs, which is what happens when Asuka has two matches.

This was also the first pay-per-view to take place from the brand spanking new WWE Thunderdome. It turned out to be an improvement over the Performance Center, despite the crowd noise being pumped in. Still, the Thunderdome at least has a big event feel to it.

No one was sure what to expect from MVP’s return to WWE at the Royal Rumble, but the last six months have been great. As the voice of The Hurt Business with Bobby Lashley and Shelton Benjamin, MVP has proven to still be a master on the mic. But he’s still got it in the ring, too.

United States Champion Apollo Crews has really stepped up in the past few months, as well He has always had all the talent in the world, he just needed the opportunity. Crews’ title reign is almost three months old, and shows no signs of slowing down. It was the opportunity he needed.

Apollo retained his championship against MVP on the pre-show in a solid match. It proved that Crews was the right choice to hold the mid-card championship and that MVP has still got it in the ring. That being said, this should be the end of Crews’ feud with The Hurt Business.

The first of Asuka’s two title matches against members of The Golden Role Models opened SummerSlam. This one featured Bayley putting her SmackDown Women’s Championship on the line against the Empress of Tomorrow.

Since her heel turn and partnering with Banks, Bayley has been doing the absolute best work of her WWE career. For some reason, her constant yelling at Michael Cole during matches is especially engaging. Maybe she’s just living out fan fantasies.

Not surprisingly, Bayley retained with the help of her bestie, Sasha Banks. This continues her historic run as the SmackDown Women’s champ. It wouldn’t be a shock to see her take this run all the way to the next WrestleMania, building a feud against Sasha Banks for the event.

The title run of the Street Profits as the Raw Tag Team champions has gone on longer than anyone would have expected. That’s a good thing, too. As they come up on as six months as the champs, they have only gotten better and better in the role.

At the same time, the fate of Zelina Vega’s stable has gotten more and more cloudy. After beating Austin Theory out of the group, Andrade and Angel Garza have been perpetually on the verge of imploding. Their SummerSlam bout was a solid match that ended with the Street Profits retaining.

The biggest surprise was the fact that Bianca Belair was not involved at all. Given her burgeoning feud with Vega, she should have been at the side of the Profits. Her time is coming soon, hopefully, as its been reported that Vince sees a big upside with Belair.

Real-life events certainly added some drama to this feud. While their kayfabe friendship has fallen apart, their real-life friendship was put on full display when an obsessed man tried to kidnap Deville at her home. Rose was present. Fortunately, everyone is fine and the perpetrator is in custody.

The match was at it’s best when Rose and Deville were working outside of the ring. But the table Rose brought out didn’t event get used, breaking the storytelling rule of Chekov’s Gun. They made a big deal out of showing fans the table so someone needed to go through it.

Deville lost, meaning she leaves WWE. It was a last-minute stipulation added on the go-home episode of SmackDown. How long Deville’s kayfabe departure lasts and how she makes her return will be interesting. It’ll be more interesting to see how Rose fits into WWE without Deville as a friend or foe.

While he might claim that his mission is to bring the greater good to the WWE, Seth Rollins’ real mission seems to be to exterminate the Mysterios from wrestling. He’s oddly obsessed with the living legend and his son. Even Dominik’s mother, Angie, was involved in this one.

A lot of fans were questioning Dominik getting such a high profile match on a big four pay-per-view as his first WWE bout. But it’s hard to deny that he delivered. Dominik may not have been the seasoned professional his opponent was, but he did well all things considered.

Rollins won the match, which he should have. No one would have believed Dominik coming out on top. If WWE is serious about Dominik, he needs to head down to NXT and sharpen his skills with the other talents there. It wasn’t a perfect match, but at least Dominik showed his legit potential.

After losing to Bayley and getting a post-match beat down, Asuka made her way to the ring. This time, she was taking on Sasha Banks for her Raw Women’s Championship. It was only at the last pay-per-view that Asuka “lost” that title to Banks in the most dubious fashion possible.

Asuka came to play, though, taking her belt back from Banks via submission. What made this win so special was that it was the first singles championship she’s won on the main roster cleanly. Both of her previous victories were in multi-person ladder matches, no pinfalls or submissions.

This was Sasha’s fifth reign as the Raw Women’s champion. She has set a record, both for wins and losses. Banks has held that title more times than any other woman. That being said, she has never successfully defended it, losing the title on her first defense every time.

Part of this loss can be attributed to Bayley not watching Banks’ back effectively. Without Banks, Bayley would not have retained earlier in the evening. Depending on what happens with their Women’s Tag Team Championships, this could be the beginning of the build to a big match between them.

This is the kind of match you want to see on a pay-per-view. Two wrestlers on the top of their games going at it over a championship. Both Randy Orton and Drew McIntyre are doing some of the best work of their careers, on the mic and in the ring. Their feud will career-defining for both wrestlers.

There was a lot of speculation going into this match that WWE was going to put the title on Randy Orton. Thankfully, that did not happen. Drew McIntyre is the WWE Champion Raw needs right now. Randy is doing amazing work, but now is not the time to take WWE to the past.

It’s unclear if this is the end of the McIntyre/Orton feud. If Edge is ready to return, then WWE will continue their program. For Drew, it might be time for a new challenger. Keeping in mind that Keith Lee just lost his title, now is a good a time as any for the limitless one to make the main roster jump.

The history between Bray Wyatt and Braun Strowman goes back years, from The Wyatt Family all the way to the current era. The babyface version of Strowman excelled after leaving The Wyatt Family behind, eventually becoming the Universal Champion.

Their feud got rolling with Bray Wyatt losing to Strowman. That got followed by a match that wasn’t a match between Strowman and a Wyatt Family era version of Bray in a swamp. Finally, “The Fiend” stepped in and took the championship off of his old friend at SummerSlam.

After the match, things really got rolling with the return of Roman Reigns. He hasn’t been seen since the start of the pandemic. But he made his intentions clear, attacking both Bray Wyatt and Braun Strowman. Heel or face, Reigns immediately launched himself back into the main event scene.

Who has to deal with Reigns has yet to be determined. It’s likely that his first feud will be with Strowman. The WWE may then use that as a launchpad towards a feud with Wyatt. No one would be shocked to see Reigns pick up the Universal Championship from him at the next WrestleMania.

In addition to Belair, the newly crowned Intercontinental Champion Jeff Hardy wasn’t on the card. He took the belt off of A.J. Styles on the go-home episode of SmackDown. A rematch at SummerSlam would have been a great addition to the pay-per-view, even on the pre-show.

Also nowhere to be found were the SmackDown Tag Team champions, Shinsuke Nakamura and Cesaro. But that shouldn’t be a surprise as the WWE seems to dislike giving these two pay-per-view air time. They aren’t even really involved in a program with anyone right now, which needs to change soon.

Both the SmackDown Tag Team titles and the Intercontinental Championship were in matches on SmackDown. That was probably done to lighten up the SummerSlam card. Regardless, those were some huge names to be absent from one of the big four pay-per-views.