When producer Kathleen Kennedy stated in an interview with Empire Magazine that the Star Wars spinoff Rogue One would not be getting a sequel, a small sigh of relief should have escaped the lips of every fan of that galaxy far, far away. This story, while slightly reliant on the originals for some context, is meant to stand alone, allowing viewers to sit back, relax, and “not feel like you’re being pulled along into something you need to make a commitment to. It means anything can happen.” Think about that last bit in particular, when applied to Star Wars movies. The last time “anything could happen” was back in 1983 with Return of the Jedi, when audiences maybe weren’t completely sure how the story of Luke Skywalker, Han Solo, and Princess Leia would turn out. One thing they did believe, however, was that whatever happened, whatever twists and sacrifices would be met along the way, there would ultimately be finality. It would wrap up, be over, and one could look back fondly at a tale well told, one with a beginning, a middle, and an end.

Remember those? Endings? They’re kind of an important part of the storytelling process, yet have somehow been strangely forgotten by both those creating and those consuming. The trend of serialization of entertainment brought on by valuing “properties” over stories has resulted in the rise of filler, pointlessness meant to compensate for a hit show’s contract extension, or the justification for turning what should have been one movie into three (or more). A satisfying resolution used to be the goal of every screenwriter in Hollywood, but with producers for whom that word is anathema salivating over any potential cash cow, it’s dilution that’s the new mantra. The impact of once-finished stories grows more impotent by the sequel (or prequel), as material that can barely support three acts is stretched out until it’s too thin to hold together.

Are you sure about this?

The story of Anakin Skywalker’s transformation to Darth Vader was elegantly told in the original trilogy through a few lines of dialogue. Audiences got the gist of the tragedy that happened, and its relevance to the events currently taking place; nothing more was needed. That the three prequels were made to chronicle something that everyone already understood is wasteful enough, but these stories also took the time to dismantle some of what made those first films so magical, eliminating mystery by reciting a litany of details that over-explained what was once wonderfully left to the imagination, and occasionally betraying characters with bizarre contradictions. Watching Alec Guinness successfully portray the archetypal mythological role of the wise sage who guides the hero is sapped of its ancient, subconscious power when you’ve seen Ewan MacGregor’s version of a younger Obi-Wan act like an absolute moron with his idiot pal Yoda for seven hours as they try to suss out a villain as plain as day to everyone. What used to be compact and strong is now riddled with inconsistency, instability. Still, bruised though the Skywalker saga may have been after Revenge of the Sith finally wrapped things up with a cheesy yowl, a heart continued to beat within its chest. Naturally, this faint life was ready to be exploited by Hollywood Matrix robots in need of energy to power their own world.

Stories that deserved dignity are now put on life support, their existence past the point of truly feeling alive, yet unnaturally prolonged for the burden of generating the ticket sales of inferior products by positive association. The writers of Episode VII clearly knew they couldn’t rely on the strength of the new characters and story they had created, possessed none of George Lucas’ original boldness, and so decided, through the resurrection of fan favorites and a plethora of shameless callbacks, to lean heavily on the familiar in order to elicit goodwill. Desert orphan, Artoo carries an important message, Starkiller/Death Star thing, space chess, wise little alien, mysterious Emperor guy, Millenium Falcon porn; the list of could go on and on, and none of it serves to create anything unique. We’d seen it all before, only then it was inspired by inventiveness, not nostalgia. Those responsible for The Force Awakens took the blood of something alive and infused it into their own Frankenstein monster to give the illusion of that original imaginative spirit, but unfortunately gave no thought for how that might affect the growingly anemic donor, or the franchise in general.

This is the look of a character that has no more left to give.

The mentality that believes there can never be too much of a good thing strips movies of their identity, lessening any impact they may once have had. After this new Star Wars trilogy is over, how likely is it that Disney stops there? At the current rate of production, a franchise that dreamers were once inspired by will merely exist as both familiar fodder for audiences and a factory job for special effects artists to put on their resume before they go on to do something actually creative. Some entries will be good, some not so much, but all will be inconsequential, nothing more than series of dazzling images devoid of any ethos, quick and easy to digest like the Chinese food of film, leaving the audience neither emotionally nor spiritually sated, instead still hungry for more empty cinematic calories that will soon be dumped into the theatrical trough placed before them.

Unless, of course, the menu somehow reverts from the current all-you-can-eat buffet back to finely prepared dishes, carefully planned-out meals where each morsel is meant to compliment the others, meant to deliver a full dining experience that tells a complete story, from appetizer to dessert. The Star Wars spinoffs are the perfect chance to let new chefs experiment, to create strange and exciting flavors from their choice of some of the best ingredients in cinema. Sure, Disney is playing it safe for now, with Rogue One and the young Han Solo film (ugh) still tethered to elements of traditional canon, but instead of passive obedience, there are signs of a struggle to break free, hints of a spirit that hasn’t been tamed yet, one that yearns for the kind of real adventure that only the great unknown can offer, and that only finality can put a stamp on. 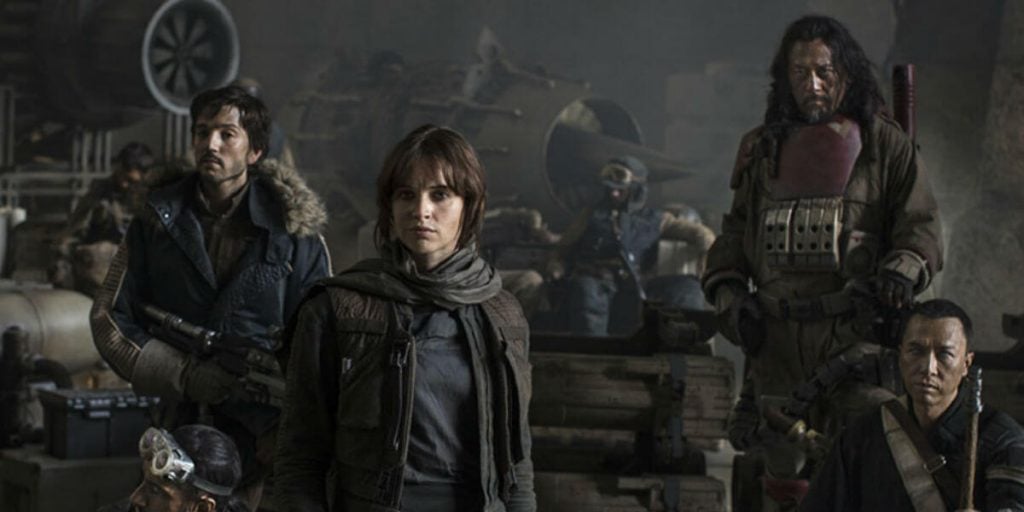 Wait – you mean NONE of you is secretly a Skywalker? Is that allowed?

Despite relying somewhat on the greater context of the franchise, within Rogue One lies a fully-formed tale, one that doesn’t wait for the second sequel (or longer) to resolve character arcs or plot threads. By freeing audiences from the “commitment” of continuation, the film itself is also free to uphold the promise that “anything can happen,” and for the first time in a long time, the stakes in a Star Wars story actually matter. Little is safe, little is preordained, nothing important is left open. Though its place in the timeline requires a certain event to transpire, how that happens, and who is sacrificed along the way, is a total surprise. The decision to rely on traditional narrative structure and dramatic development instead of simply building a plot centered around the next cliffhanger makes for one of the most emotionally satisfying endings the series has had since Luke squared off against the Emperor for the fate of his soul. When the credits roll, Rogue One is over, and that is a beautiful thing.

By relieving spinoffs from the burden of saga, they are allowed to simply be movies. They can be works that stand by themselves, defined pieces of entertainment, telling any type of story in any type of style, benefitting from an iconic universe whose rules nearly everyone already understands. It’s an incredible advantage over other would-be world-builders, and one that has yet to even be slightly exploited. Strange as it may seem at first, the thought that one day there could be a Star Wars rom-com, a Star Wars melodrama, or (please, please make this happen) a Star Wars horror movie is thrilling. No more ceaseless sagas – just movies. The property is bigger than any one family who somehow happens to be at the center of every epic battle for the fate of the galaxy, and if the true potential for storytelling is to be unlocked, the Skywalker story must come to an end.

Luke knew when to move on, and so should we.

Looking to the past is not a way to move forward. In fact, by continuously digging it up the Star Wars franchise only gets dirtier. It’s important for filmmakers to stop looking back to appease an aging generation eager to be reminded of their youth. They should pursue their own Star Wars, their own original ideas, something that will capture new imaginations moving forward. Leave the past be, so as not to screw it up any more than it already has been. The power of Luke Skywalker, Han Solo, and Princess Leia won’t suddenly be forgotten if they aren’t constantly on display in the galactic zoo, but it can be weakened if they are. Spinoffs like Rogue One are a guiding light away from that sad fate and toward a new horizon, one where a vital part of any journey isn’t merely teased but actually reached – the destination. Getting there may be half the fun, but actually arriving is the only way to take satisfaction in how far you’ve gone.