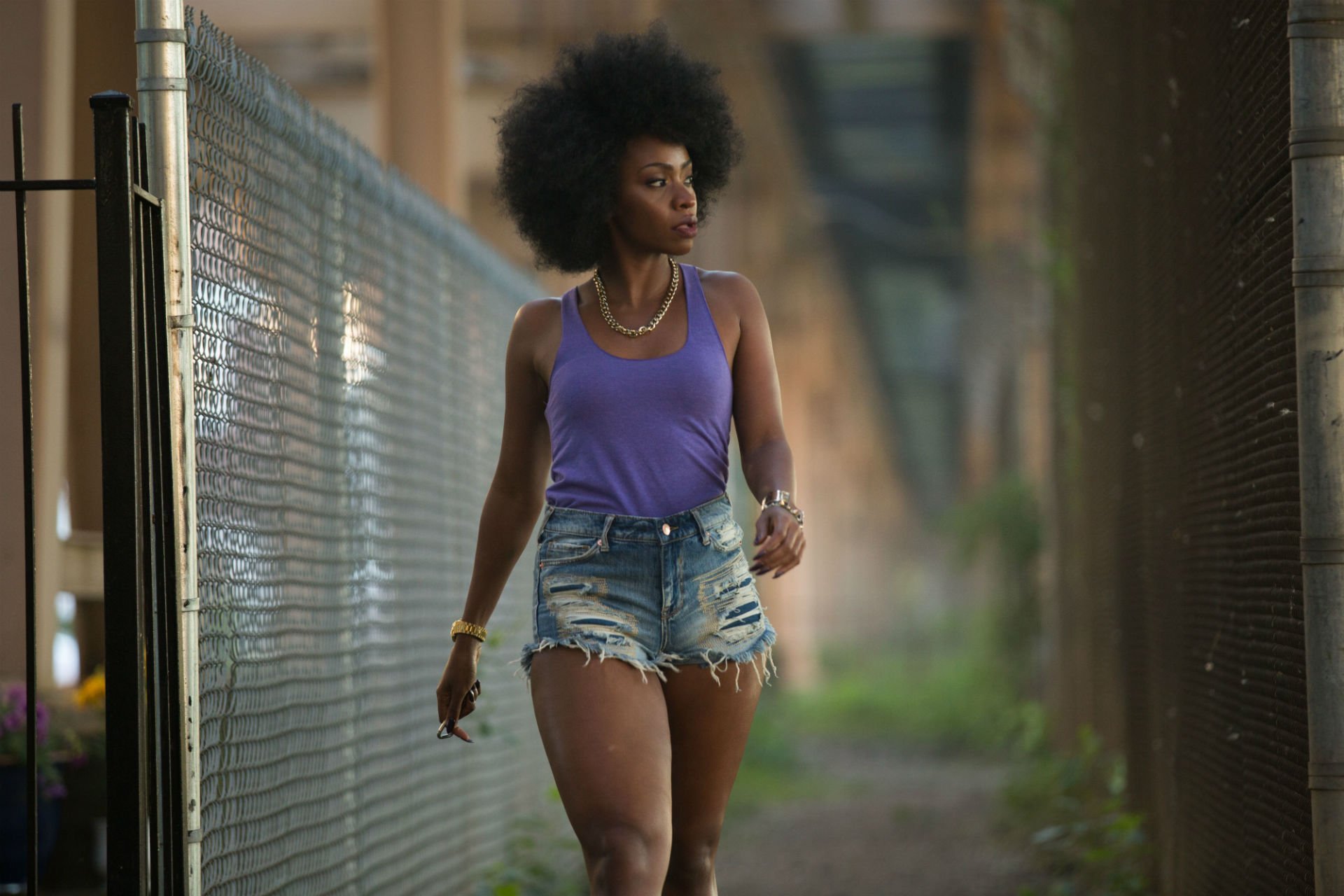 With the number of homicides in Chicago exceeding the combined number of casualties in the Iraq and Afghanistan wars over the same period of time, Spike Lee is in a rabblerousing mood. His message in Chi-Raq is urgent, intermittently funny, and often heavy-handed. Undermined by a haphazard mix of melodrama and satire, Chi-Raq achieves its social objectives while faltering as a film. Ultimately, Lee has created a satire for people who don’t like satire. It’s a timely effort that will raise awareness through its passion but fade through its flaws.

It takes guts to make a satire based on a Greek play that no one can pronounce, comprised solely of rhyming couplets. In this case, Lee uses the Aristophanes’ comedy, Lysistrata, in which a determined woman organizes a sex strike to end the Peloponnesian War. Sexual extortion is not exactly a new idea. Women in Liberia used a sex strike to end a 14-year civil war, while women in Colombia have used forced abstinence to influence drug wars. In the animal kingdom, too, Bonobo apes use sex as currency to settle disputes and maintain harmony. “No peace, no pussy” might be a primordial way to gain a man’s attention, but there’s no arguing with the results.

Lysistrata (Teyonah Parris) is an independent-minded woman who’s had enough of the gang violence in her hometown of Chi-Raq (a portmanteau of ‘Chicago’ and ‘Iraq’). Her boyfriend, also named Chi-Raq (Nick Cannon), is the leader of the Spartans, who are currently at war with Cyclops (Wesley Snipes) and the Trojans. When a little girl gets murdered in the gangland crossfire, Lysistrata organizes the neighborhood ladies in a booty boycott; no sex until the warring factions make peace. Soon, the entire world is embroiled in a battle of the sexes, with frustrated men ordering their women back to the bedroom “where they belong.”

There are moments of inspired lunacy in Chi-Raq. Lysistrata’s emasculation and conquest of a bigoted Southern general defies the imagination. Meanwhile, the army takes a page from the Manuel Noriega playbook by using sexy R&B standards to titillate the women during “Operation: Hot and Bothered.” This is wonderfully wicked satire that cuts straight to the acidic heart of racism, sexism, and classism in America.

Unfortunately, Lee and co-writer Kevin Willmott are so anxious to deliver their message that they lose sight of this satirical power. Instead, they slather on the type of melodramatic flourishes that we’ve seen so many times before, undercutting the creative comedic elements. It’s admirable that Lee tries to inject so much humanity into his film, spending a great deal of time with the mother of the murdered child and Angela Bassett, who has her own devastating scars. In the context of this film, however, it feels off-kilter and pandering. It’s as though the filmmakers wanted to be subversive without actually challenging their core audience. It’s hard to play nice and make a great satire.

The one-man Greek chorus of Samuel L. Jackson provides most of the lyrical highlights. Jackson leads into scenes with the energy you’ve come to expect, snapping off some real firecrackers (“In the style of his time, Aristophanes made that shit rhyme!”). Some profanity and taunts are coupled in interesting ways (“Women! You need us! Do your duty and give up that booty!”), but most of the dialogue is too direct to be either provocative or interesting. This is a movie, after all, that has a priest (John Cusack) literally preaching to the choir… for 10 minutes! It’s a heartfelt screed, to be sure, but there’s nothing here that Spike Lee’s audience doesn’t already know. The people who need to hear this message probably won’t be entertained enough by the satire to stick around and listen.

Most of the musical numbers, save an uplifting chorale arrangement, are pretty forgettable. Again, the phrasing is just too ham-fisted and straightforward to be very interesting. Every frame of Chi-Raq is intent upon delivering a social message that gets telegraphed like a Rocky Balboa uppercut. A sexy duet in the film’s finale between Parris and Cannon hints at what might have been if the characters had sung to each other rather than at each other.

The performances are generally strong, though some of the actors have trouble shifting between the oscillating earnest and outrageous tones. Parris suffers from playing a one-dimensional character that makes up her mind to do something and then never wrestles with conflict again. Bassett gives a superb turn as the only three-dimensional character in the piece, and Harry Lennix does great work as the hapless Commissioner assigned to subdue the female insurrection.

Lee has never been afraid to mix styles and tones; it’s what he does. With Chi-Raq, however, satire and melodrama make very disconcerting bedfellows. Each undermines the other from achieving their objective, diluting the final product to something that is neither provocative nor heartwarming. True, Lee’s social message rings clear and will, no doubt, resonate in all the intended quarters. It’s important to be reminded of the injustice, hypocrisy, and disenfranchisement that eat away at our social fabric. Still, a message is only as effective as the messenger, and Chi-Raq has too many flaws and inconsistencies to be more than a momentary blip on the radar.

Eden, the French Film About the Electro Scene that Propelled Daft Punk to Stardom

Nightcrawler: How far would you go for the American Dream?