For nearly two hours, the pulse-accelerating, Keanu Reeves vehicle, titled Speed, rarely taking a second to slow down. With a story by debuting screenwriter Graham Yost (of Justified fame), this high-adrenaline, nonstop roller-coaster ride is really three pictures rolled into one. Speed is divided into three acts; the first is a 23-minute curtain raiser, reminiscent to a scene in Die Hard, in which Officer Jack (Keanu Reeves), and his partner (Jeff Daniels), must rescue a group of passengers, trapped in the elevator of a high-rise building. The last act, a 25-minute climax, features an underground foot chase through LA’s than still-under-construction subway system. These two sections bookend the longer sequence of which Speed has become famous for; a 67-minute, literally non-stop action sequence, set on board a bus that’s rigged to explode if it slows down to under 50 miles-per-hour. For a film that clocks in at nearly two hours, there is never a dull moment in Speed.

Make no mistake, Speed is a straight up action flick, and the number one priority of the filmmaker is to keep audiences at the edge of their seats. Not much attention is paid to character development, much less motivation, characterization, plot, or logic. But put aside the number of gaping plot-holes, Speed is one, if not, the best action film of the 90’s. As Dennis Hopper’s Howard Payne tells Jack, “Do not attempt to grow a brain!”

Speed is a thrilling motion picture and remains one of the most entertaining examples of the action genre. 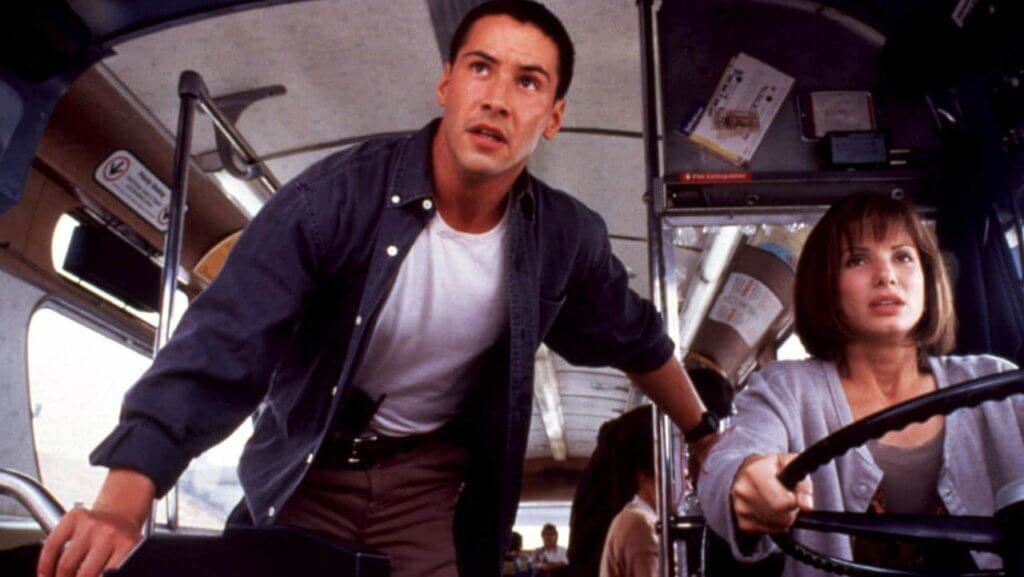 First-time helmer Jan De Bont, acclaimed cinematographer of most of Paul Verhoeven’s films, as well as numerous other Hollywood blockbusters, does a stellar job letting the action unfold in real time. This is a film that cries out for audience participation. De Bont wants us to know exactly what it feels like to be on that bus and does he ever succeed. With every dip of the speedometer, viewers feel their pulse racing. De Bont handles the action with grace and aptness. Besides the film’s biggest stunt, which has the city bus defy physics by flying through the air over a 50-foot gap, the stunts and special effects in Speed are flawless.

The aloof Jack Traven is a switch from the 80’s school of bad-ass, one-line, heroes; and Traven is actually the perfect fit for Reeves. Reeves is asked to do little more than look good, and he’s good at that, but his performance is better than one might expect. Reeves acquits himself well and does more than just flex his muscles, including performing approximately 90% of his own stunts. Sandra Bullock is extremely appealing as driver Annie, managing to combine courage and fear in a surprisingly seamless performance. Meanwhile, Dennis Hopper does what he does best, chewing up scenery left and right as the villain Howard Payne.

Great action movies come along once every few years. Speed is a thrilling motion picture and remains one of the most entertaining examples of the action genre. 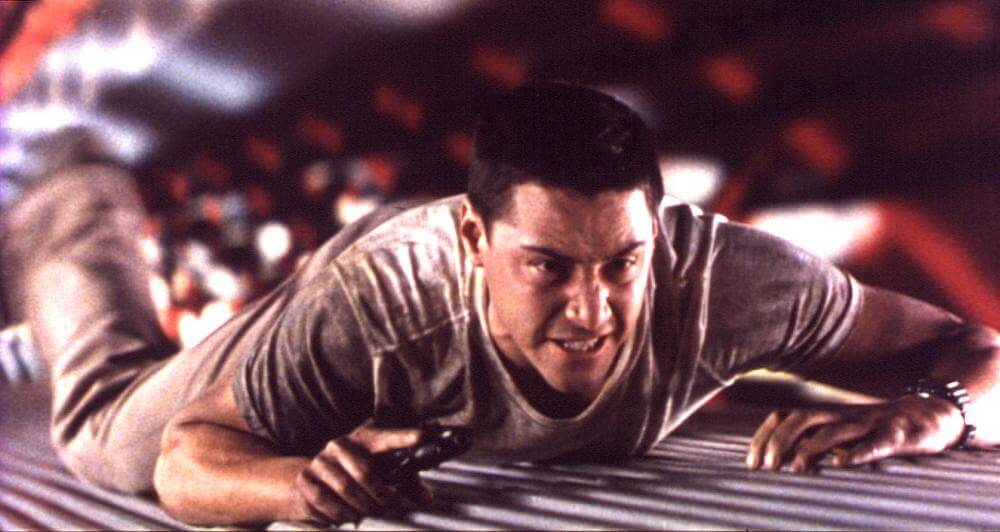 Give credit where credit is due. Script doctor Joss Whedon was called in to rewrite the dialogue, and the writing is as sharp as nails.

Look out for Alan Ruck (best known as Cameron in Ferris Bueller’s Day Off) who has a couple of good moments as one of the passengers of the bus.

Howard Payne: Pop quiz, hotshot. There’s a bomb on a bus. Once the bus goes 50 miles an hour, the bomb is armed. If it drops below 50, it blows up. What do you do? What do you do?

Howard Payne: See, I’m in charge here! I drop this stick, and they pick your friend here up with a sponge! Are you ready to die, friend?

Director Jan de Bont came up with the idea for the opening elevator sequence while working as a cinematographer on Die Hard. He was apparently stuck in the elevator on the 40th floor and had to climb his way out of the escape hatch in order to get out.