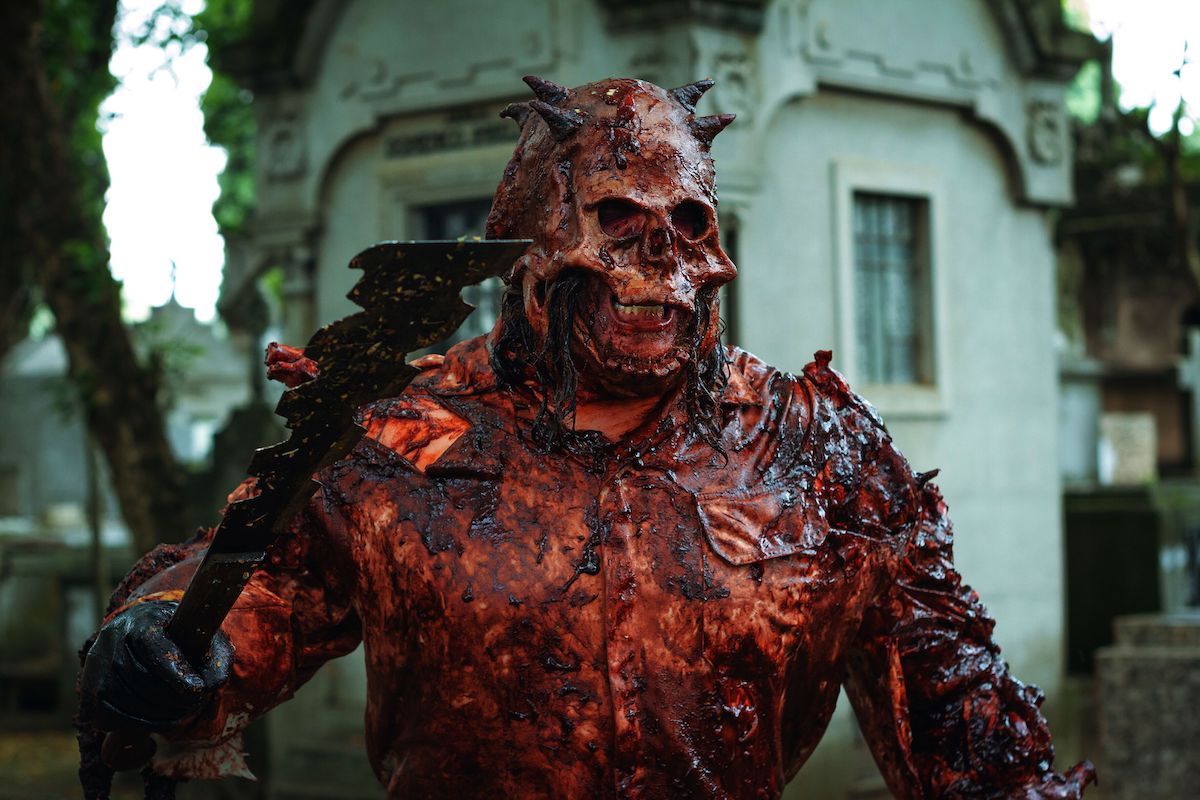 Skull: The Mask starts in one of the darkest periods of history, 1944, with a Nazi military experiment deep in the Amazon. The subject of the experiment is the malevolent “Mask of Anhanga” — an ancient executioner from pre-Colombian mythology. While any normal god-fearing person wouldn’t go anywhere near such a terrifying object, these foolish men learn of its horrific power the hard way… the very hard way.

Cut to the present day, and a keen archaeologist has rediscovered the object, deeply excited about the cultural cachet it will bring to her museum. But she has no idea what she in for, accidentally resurrecting the ancient killer, who wreaks utter havoc upon the poor citizens of São Paulo.

The resultant Brazilian slasher film is sure to be a fixture of the Midnight Movie circuit, a no-holds barred giallo horror with heaps of murder and mayhem. It promises on its blood-and-guts premise and then some, with its relentless villain — a demoniacal cross between Ghost Rider and Michael Myers —  dispatching of its victims with delightful gruesomeness.

Only one woman seems capable of fighting this demon, Beatriz Obdias (Natallia Rodrigues). She is your classic hard-nosed cop, controversy plaguing her unique style of policing. But when you are dealing with ancient, evil forces, sometimes you need a woman like Obdias on your side. Her noir attitude is perfectly at odds with the surrealist horror wrought by this ancient demon.

An element of satire runs throughout, the horror genre used to expose the worst elements of contemporary Brazilian culture. With the current president waging war on Brazil’s indigenous population, Skull: The Mask, seems to take a few sly digs at the ignorance of European Brazilians. One remark in particular to a museum burning down acts as a pointed reference to what happened to the National Museum, containing priceless artifacts, in 2018. Later, during one of Anhanga’s most brutal bloodbaths, he gatecrashes a Halloween party where the guests wrongly assume he is just a particularly well-dressed attendee; providing a savage critique of cultural appropriation in the process.

Like Bacurau, which took an odd sci-fi Western approach to the subject of colonialism, Skull: The Mask is another work of resistance cinema; satirizing right-wing ideology through blood and terror. Additionally, while Skull: The Mask manages to stay light at the right moments — i.e. the moments of chaotic destruction — directors Armando Fonsec and Kapel Furman are deeply sincere about the damage imposed on Brazil by those uninterested in its complicated history. Yet these moments are not insisted upon, and in the dark of a cinema screen, surrounded by an excitable crowd, they can be missed as Anhanga — seemingly consisting of pure blood and metal — dispatches of yet another helpless victim.  It shows how you can make serious points while still having a lot of fun. The beauty of the slasher genre lies in its ability to carry critique without needing to make too fine a point on it. This is a particularly accomplished example.

Editor’s Note: This article was originally published on May 22, 2020 as part of our coverage of the Chattanooga Film Festival. Skull: The Mask will be released May 27, 2021, on Shudder.