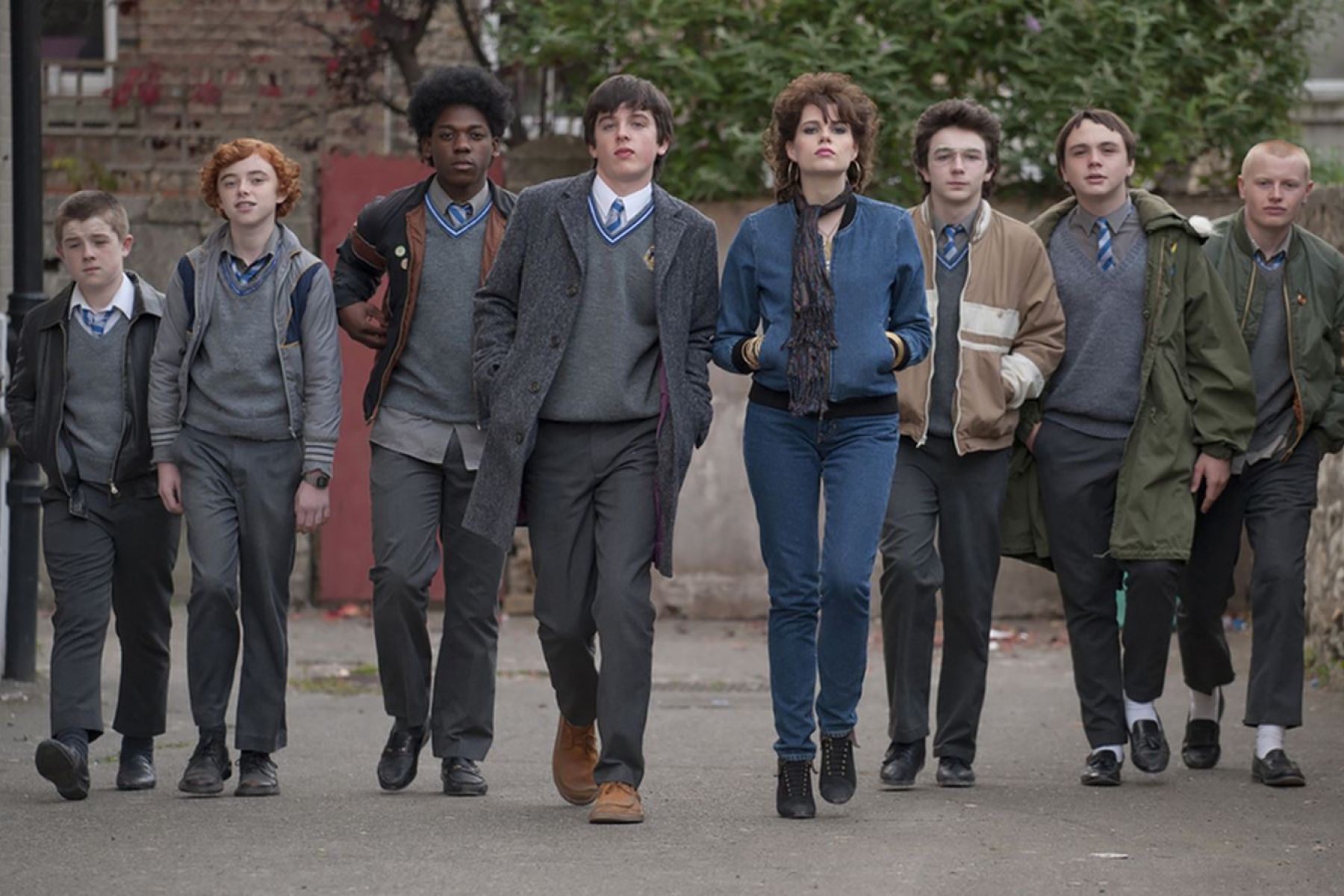 Sing Street is Paved with Nostalgia and Rock-N-Roll Dreams

John Carney loves making movies about people who love music. The Irish writer-director seems determined to capture the essence of what makes music so intoxicating and inspiring.  His latest toe-tapping musical dramedy, Sing Street, is like snuggling a fuzzy blanket full of ‘80s nostalgia and boyhood fantasies about rock-n-roll domination.  It’s an open invitation to reminisce about the days of drinking warm beer from plastic cups and bumming cigarettes from your older brother.  Whip-smart and unrepentantly heartfelt, Sing Street will give you a serious case of vinyl fever.

While starting a rock band isn’t the stupidest (or most original) stunt a boy can pull to impress a girl, few things threaten the same level of public humiliation. For 15-year-old Cosmo (Ferdia Walsh-Peelo), music is the only escape from his chaotic family life and relentless bullying at the Christian Brothers School in Dublin.  Being the lead singer in a rock-n-roll band is also his best shot at wooing the slightly older and infinitely more mature Raphina (Lucy Boynton).  Her patient indulgence of Cosmo’s clumsy advances quickly blossoms into something more delicate and sincere.  Music not only brings them together but helps launch their hastily-devised dreams toward something resembling reality.

It’s quite possible that John Carney has created the perfect companion to Linklater’s Everybody Wants Some!! Both films slather the screen with enough musical nostalgia to cause a Technicolor lens flare.  Staged in 1985, Sing Street is that quintessential ‘80s mixture of glamor and glum.  Listening to Cosmo’s older brother Brendan (Jack Reynor) pontificate on the virtues of Duran Duran’s “Rio” is both idiotic and sublime.  Carney delivers a sumptuous musical cross-section of an era when teenage rockers changed hairstyles and underwear with about the same frequency.  Cosmo’s influences transition from Duran Duran to The Cure to The Jam in a matter of weeks; each signaling not only a wardrobe change but a shift in his perception of an unfair world dictated by clueless adults.

What distinguishes Carney’s musicals is his ability to convert emotional themes into songs that still rock. His plucky anthems don’t overpower the drama of the moment.  When Cosmo and his band, Sing Street, perform their big show-stopper, “Drive It Like You Stole It,” the story doesn’t grind to a halt.  Instead, Carney moves the drama forward while simultaneously planting a catchy song in your brain.  Cosmo transports himself into an imaginary music video where an evil headmaster (Don Wycherley) gets his comeuppance while the dashing lead singer and his beautiful girlfriend escape into the night.  These relatable moments become indelibly linked to lyrics and tune, which largely explains the appeal of Carney’s masterful debut, Once, and 2014’s affable Begin Again.

Effective songwriting also keeps the need for overwhelming exposition at bay. When a character finally opens up, as when an inertia-plagued Brendan laments that he used to be “a f***ing jet engine!” it feels like a punch to the gut.  Mostly, Sing Street sidesteps the pain and celebrates creativity.  Some of the film’s most exhilarating moments come from extended jam sessions between Cosmo and Eamon (Mark McKenna); the industrious bandmate who can seemingly play more instruments than Paul frickin’ McCartney!  In fact, it’s fun to imagine Cosmo and Eamon as a young Lennon and McCartney, plugging away on their guitars, armed with nothing more than a half-realized melody and some lyrics scratched on a notepad.  It’s like watching the birth of something that happens every day in every godforsaken town on every Class M planet.

It’s easy to forgive Carney’s creation for trespassing into sentimentality. Clearly, he loves these characters a bit too much, probably owing to the autobiographical nature of the material.  And what isn’t to love about them?  They tackle life with an endearing blend of cluelessness and capability; shaping their future through impulsive action and broken hearts.  Even the loutish Barry (Ian Kenny), who instills each scene with the threat of unpredictable violence, is just a passionate kid searching for a safe niche.

Sing Street employs a cast of largely unknown actors to keep things relatable. Walsh-Peelo is likeable as Cosmo, and his shortcomings as a musician make his eventual triumphs all the sweeter.  Reynor channels his best Jack Black as Cosmo’s musical mentor and emotional buffer.  He’s the kind of wiseacre who has perfect insight into everyone’s life but his own.  Boynton is luminous as the object of Cosmo’s desire, barely containing her terrified vulnerability beneath a veneer of cynicism and hair gel.  More importantly, when it comes time to rock out, everyone is suitably convincing.

John Carney doesn’t break any new ground on Sing Street, but he travels this well-worn path with a renewed sense of discovery and fun.  Packed with memorable songs and delightful rascals, this love letter to restless adolescence leaves you feeling all warm inside. Sing Street acknowledges that the future is scary, but it’s nothing you can’t handle with the love of a good woman, some hard-rockin’ friends, and a crazy dream that will never die.

Remembering Glen Hansard and Markéta Irglová from Once

50 Years Later: Vanishing Point is One of the Best American Counterculture Road Films